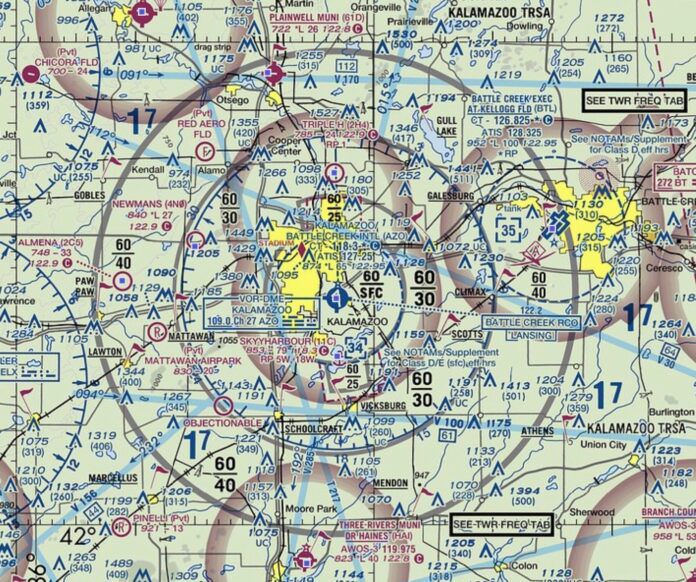 The Oxcart English/Aviation Dictionary defines TRSA as: Terminally Redundant Suspicious Airspace. And here now to illustrate how TRSAs continue to evade mention in polite aviation salons, is a transcribed actual event that could’ve happened. Reader discretion is advised but not expected.

It began like any Tuesday, coming sharp on the heels of another Monday. A former student rode his eBike down the runway, fell off, leaned it against my hangar but delayed entering. Something was on his mind, but he was hesitant to speak. So, I called, “How was summer camp?” He’s a second lieutenant in the Air National Guard and a composite of six of my former students, wonderful people all. He mumbled in that adorable way butter-bar O-1s do, “Um, like, you know.”

He took a seat on an overturned bucket, and we stared at the airplane I was pretending to wax. I’ve pretended doing that for years with little progress. More importantly, as I searched for more importance, I could tell he burned to ask me something but was too embarrassed. Surrendering to that burning sensation, he mumbled, “Some of the captains at camp had, like, FAA manuals.” His voice broke. “With, like, graphics.”

His narrative turned accusatory: “You didn’t tell me everything I needed to know about … you know … airspace.” I reminded him that we’d discussed airspace ABCs in ground school—” But he interrupted, “I mean all of it, including the stuff no one talks about.”

I glanced at the portrait on the wall of former FAA Administrator Jane Garvey (not a pilot), and we exchanged knowing winks. It was time for The Talk. Time to teach without obfuscation the facts of flight, especially where airspaces come from. I repacked my pipe. I don’t smoke, but it imparted gravitas. “You see, Timmy—”

“When two airspace analysts really like each other, they …” And I retold the wondrous story about how airspace classes A through G—skip F because we don’t mention that crazy uncle in the attic—were created in the 1993 airspace reformation. And waving my pipe stem so the smoke formed uppercase letters in the air, I explained that prior to alphabet soup airspace, the sky was filled with unpronounceable creatures called ARSAs, TCAs and ATAs that are now Class C, B and ….  Justin interrupted, “But no one told me about TRSAs!”

“I didn’t think you were ready,” I whispered.

Flight instructors can be uncomfortable talking about TRSAs, because like unicorns or Bitcoin, they don’t exist, unless we believe they do. Thirty US airports believe they have TRSAs, and I’m guessing a like number of pilots understand them. TRSA really means Terminal Radar Service Area, and pilots flying through these spaces of air, surrounding designated terminal facilities (airports), can receive radar service. It’s possible to operate inside a TRSA without a transponder or talking to ATC, but that might be rude.

At first glance, a TRSA resembles Class C airspace, but it’s not. It’s nothing. Sectional charts (remember those?) depict this airspace hermaphrodite with black lines surrounding a core airport that has Class D airspace. I consider the lines more charcoal than black, but whatever. Class D airspace, depicted with dashed blue lines, has a control tower, and when it’s open, pilots shall establish two-way communication with the tower prior to entering the D airspace. Like this: “Kalamazoo tower, Citabria 26PK.” When tower replies, “Cessna 1508Y, Kalamazoo tower,” they’re talking to someone else, so be patient and try again. Once establishing two-way communication, you may enter D airspace but can’t land D airplane without a clearance. No transponder required, unless the D airspace happens to sit inside a Mode C ring surrounding more challenging Class B airspace. There are exceptions for aircraft “not originally certificated with an electrical system.” (FARs 91.215, 91.225)

When approaching a TRSA, associated with Class D airspace, VFR pilots should—not shall—contact approach control for radar service, which for VFR is mostly safety alerts, traffic advisories and sequencing, similar to Class C radar service. So, why the difference? And why have TRSAs at all?

Legend holds that TRSAs were still in gestation when the airspace ABCs were born. Their arrival eliminated old-school dominions, such as ARSAs. After alphabets filled the sky, someone noticed that TRSAs had hatched but lacked the Part 71 or 91 regulatory provenance conferred upon the newer designations. These orphaned TRSAs existed but didn’t, and those in charge didn’t know how to eliminate them. Still don’t.

Think of TRSAs as the ultralights of airspace. Part 103 sorta regulates ultralights. They’re not airplanes—mostly lawn chairs with wings—and because they’re not really airplanes anyone can attempt to fly one without a license. Crash, and you’re just another crumpled idiot on YouTube. Crash an ultralight inside a TRSA, and the FAA’s attorney, Tom Hagen, will conclude, “It’s like you never existed.”

Here’s what you need to know about TRSAs: Not much. Unless you’re on a check ride. After that, still not much. When encountering one (VFR; IFR pilots don’t need to know much airspace stuff), call approach control for radar service; there are few reasons to decline it. If flying an electrically deficient Aeronca Champ, skip approach and go straight to tower. They won’t understand anything you’re saying on your wheezy KX99 handheld, so watch for light signals.

When I finished explaining TRSAs to Justin, he seemed overwhelmed and yet disappointed to learn that there was much that primary instructors don’t teach. I was about to launch into my bilious fallback, “Learning is a lifelong adventure,” but instead, asked, “You okay?”

He sat thinking. Then, “So, does this mean I’m not ‘prohibited’ from entering Prohibited Areas?” A spreading grin implied forbidden intrigue with the prospect.

“Ask you mother,” I answered. “And quit using air quotes!” I resumed pretending to wax the airplane.