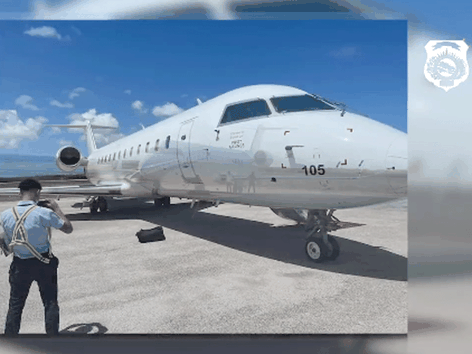 Four crew members and six passengers from a Canadian charter company’s CRJ 100 have been released on bail but ordered to remain in the Dominican Republic while the discovery of about $25 million worth of cocaine on their aircraft is investigated by local authorities. As we reported earlier, the crew of the Pivot Airlines aircraft actually reported the 450 pounds of cocaine that was stashed in the avionics bay of the regional airliner to both Dominican and Canadian authorities. At that point, all 10, including the four Canadian crew, four Canadian passengers, a Dominican and an Indian national became suspects and were jailed.

On Friday, all 10 were released after putting up about $18,000 each in bail. The cocaine was found in a bag in the avionics bay on March 31 and the passengers and crew were held with the general population of detainees in several Dominican jails. The airline said they were threatened and now face a lengthy form of house arrest in the Caribbean country. “It is unacceptable that a Canadian aircrew could remain detained for the duration of a potential twelve-month investigation for a suspected crime that they reported,” the airline said in a statement. “We are deeply concerned for the safety, security and ethical and humane treatment of our crew.”