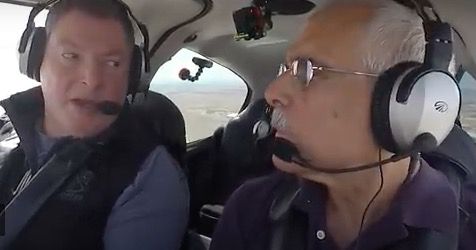 MyGoFlight CEO Charlie Schneider is being remembered as a prolific inventor, innovative businessman and dedicated family man after dying Friday from injuries suffered in a plane crash on Thursday. Schneider was flying his company Cirrus SR22 G3 Turbo near McGhee-Tyson Airport in Knoxville, Tennessee, when it went down on a construction site and was consumed by a post-crash fire. An unidentified passenger died at the scene. The whole-plane parachute was deployed and AOPA says “an early assumption is that Schneider was demonstrating the SkyDisplay (HUD system made by his company) and encountered wake turbulence.” AOPA does not cite a source for the assumption.

Schneider developed a host of innovate products, from iPad coolers to versatile flight bags, but the SkyDisplay was arguably the most important. The tiny HUD, which, at $29,000, costs a fraction of those found on airliners and business aircraft, offers many of the same features. It got supplementary type certificate (STC) approval last June. AVweb interviewed Schneider about the SkyDisplay when it was unveiled at NBAA in 2016 and again in 2019 when the product was in final development (accompanying video).