Home Aviation News New Strategy Could Use Weather Data And ATC To Cut Back On...
Print
Email
Facebook
Twitter
Linkedin 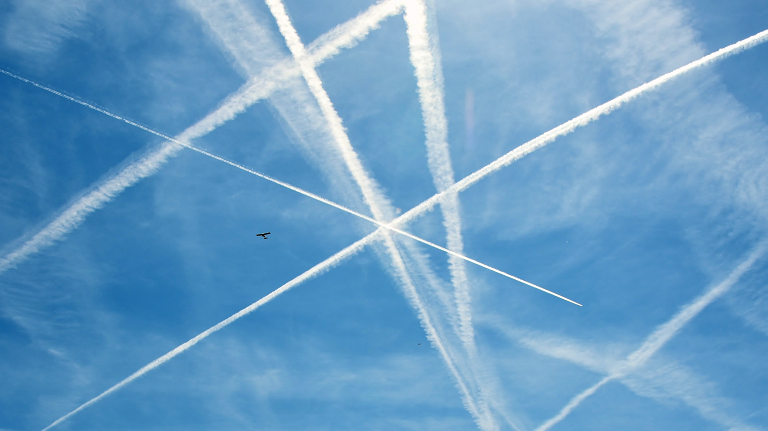 During the Korean War, USAF F-86 Sabre pilots learned a trick while enroute to MiG Alley where they would tangle with North Korean MiG 15s. The Soviet-built fighters had a superior climb rate and service ceiling, so the Sabre pilots wanted to get as high as they could before engaging. But high-altitude contrails would give away their position, so while still well away from the combat area, they would climb to the altitude where the contrails would start to form, then either climb (preferred) or drop down slightly until the contrails disappeared. A similarly simple strategy for airliners is now part of a plan to cut back on greenhouse gases in the battle against global warming.

When hot jet exhaust gases and water vapor mix with cold air, especially at high altitude, they generate condensation trails, or “contrails,” the equivalent of man-made cirrus clouds. Studies cited in a paper published on ScienceDirect.com have shown that some 33 percent of the Earth’s longwave radiation, rather than reflecting back into space, bounces back to the surface of the planet when it encounters a contrail-generated cloud. Contrails are estimated to be responsible for about 2 percent of overall man-made “radiative forcing,” and the article cited research that calculated and inventoried coverage by contrails in the U.S. National Airspace System.

It found that an average of just 15 percent of daily flights generate contrails, and the coverage can be pinpointed by time of year (63 percent occurs from June to September) and geographic location of what are called Ice Super Saturated (ISS) regions, mostly concentrated on the Pacific Coast and the southeastern U.S.

According to the paper’s abstract, “The analysis found that elevating the cruise flight level of contrail-generating flights by 2000 or 4000 feet reduced the number of average daily flights with contrails by an average of 14.8 percent, the net radiative forcing by an average of 92 percent, with an average net small decrease in fuel-burn of 1 percent [due greater fuel efficiency at higher altitudes].”

Part of the proposed strategy would involve tapping into “Big” weather data to predict when and at what altitudes contrails are likely to be generated and using the air traffic management system to proactively assign flight paths and cruising altitudes to avoid that airspace.

Eurocontrol has a similar plan under consideration for European airspace.