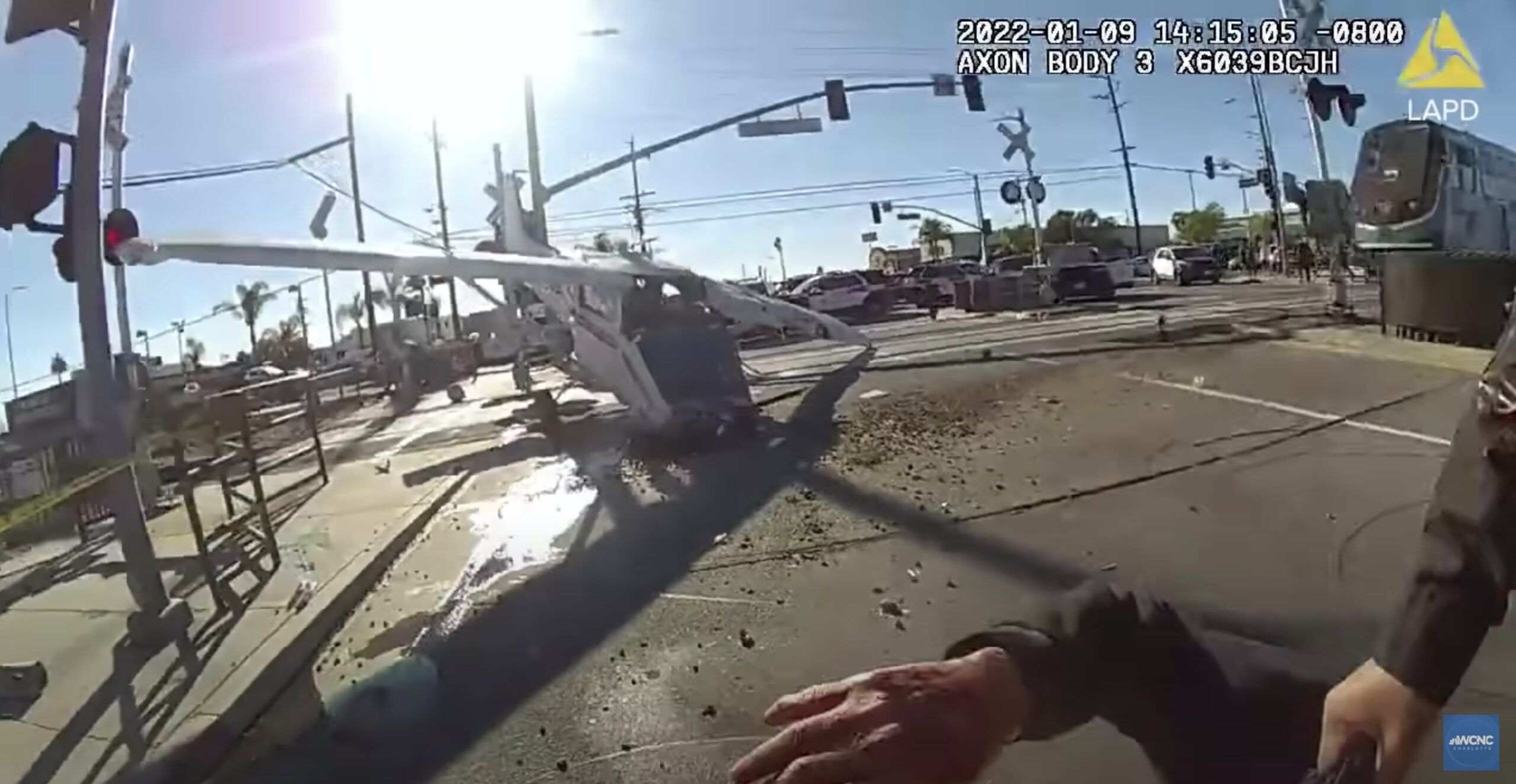 In what turned out to be a miraculous ending to a really bad day, LAPD officers pulled an injured pilot from a crashed Cessna 172 moments before it was struck and destroyed by a commuter train. Mark Jenkins, the 70-year-old pilot, was pulled from the wreckage of the aircraft after he crash landed on railroad tracks near Whiteman Airport, which is located in the north Los Angeles suburbs near Burbank Airport. Police body camera footage revealed that several officers acted quickly to free and remove Jenkins just seconds before the Metrolink train obliterated it.

The aircraft had just taken off from Whiteman when it touched down on the tracks in Pacoima at the intersection of San Fernando Road and Osborne Streets, the LAPD said. The tracks in that area run parallel to Whiteman’s 30/12 single runway and according to an LAPD spokesperson, the Skyhawk lost power just after takeoff around 2 p.m. Monday. The nosewheel may have been sheared off by track ties, causing a violent touchdown. The airplane appeared to remain upright, but was seriously damaged. The pilot’s step-son-in-law, Dan Mortensen, told authorities that Jenkins was an Air Force fighter pilot and an experienced GA pilot. The two were partners in the 1967 172H, according to Mortensen, and have had the airplane for more than 20 years. Jenkins was the only occupant.

Jenkins was listed in stable condition on Monday evening and suffered facial and other injuries, but is expected to recover. “He’s suffered pretty significant damage to his face, a lot of broken bones. He’s also got broken ribs,” said Mortensen. “What went through my head all night last night was what if they couldn’t cut through the seat belt in time or couldn’t get the door open because it was jammed from the impact. All it could’ve taken is another two seconds and at least he would have been killed, probably with certainty, I think,” Mortensen told Los Angeles’ NBC News 4. Mortensen told the station that he believes Jenkins chose to land on the tracks to save lives on the ground. “The down side to that, I think, possibly a railroad tie or something, ripped off the nose wheel on touch down and sent the nose down into the ground, which caused a tremendous forward-slamming force so he hit his face and upper body pretty hard,” the station reported Mortensen saying.

This bystander video, shot by 21-year-old Luis Jimenez, shows how violent the impact was. Bits of debris are hurled dozens of feet and the photographer was struck by one, according to news reports.