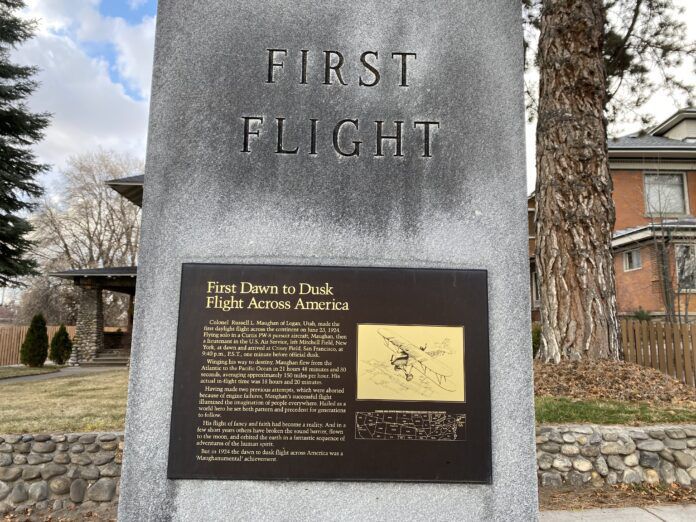 On a side street in the northern-Utah city of Logan, a large plaque celebrates the city’s contribution to aviation history. On June 23, 1924, Logan native and U.S. Army Air Service test pilot 1st Lt. Russell Maughan became the first to complete a “dawn-to-dusk” transcontinental U.S. flight from New York to San Francisco. The flight was scheduled close to the summer solstice, the longest day of the year, for maximum daylight going east to west.

The plan was part of an Air Service program, started in 1919, to establish endurance, distance, altitude and speed records. General Billy Mitchell was keen to promote public support—and a larger slice of the budget pie—for the Air Service, later leading to his court martial for defying his superiors in tests that ultimately proved the superiority of air power over battleships. The dawn-to-dusk flight was meant to highlight the potential for rapidly moving air assets from one side of the country to the other.

Mitchell selected a modified prototype of the 435-HP Curtiss PW-8 fighter, which was derived from the R-6 Racer. The one-off version had its guns removed and extra fuel tanks installed to increase capacity to 177 gallons. After two failed attempts in 1923, the flight was rescheduled for the period surrounding the summer solstice the following year. Thirty-minute refueling stops, following recently established airmail routes, were planned for airports in Ohio, Missouri, Wyoming and Utah—Maughan’s home state. He took off from Mitchel Field, Long Island, New York at 3:58 a.m., just after sunrise.

After agonizing delays to repair a broken fuel tank valve at the first stop and an extra stop due to one of the fields being too soggy for a full-fuel takeoff, he zeroed in on the revolving light on Alcatraz Island to guide him to Crissy Field, San Francisco. After 20 hours and 48 minutes en route (18 hours and 20 minutes of actual flight time), at an average groundspeed of 156 MPH, the Curtiss touched down in front of some 50,000 spectators at 9:46 p.m. Pacific Time, just one minute before official sunset.