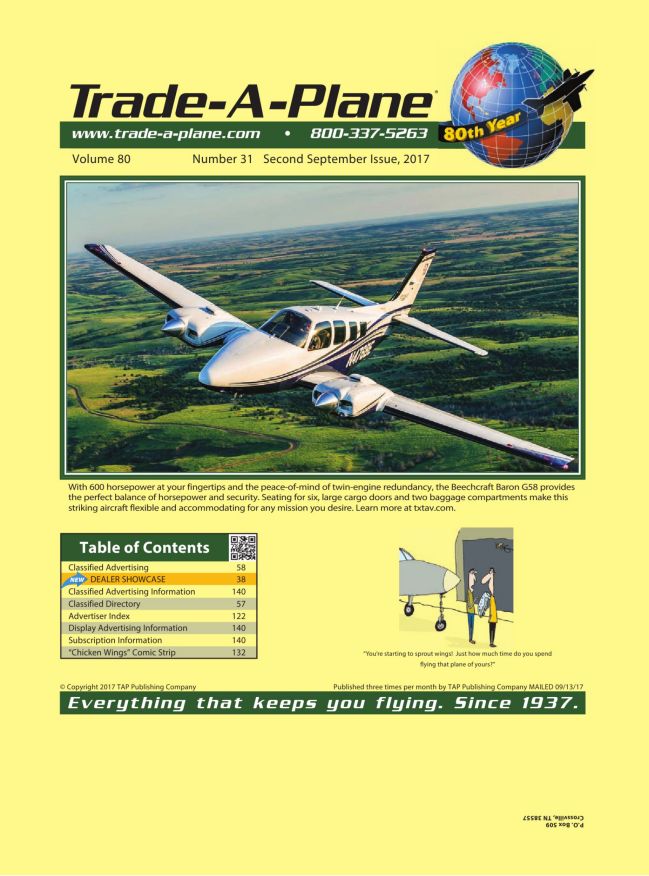 I will truly miss the printed version of Trade-a-Plane. I was used to see them at pretty much every FBO I landed at and always browsed through it. When buying and then selling a plane and during my job as chief pilot (while being involved at purchasing and selling aircraft to fit new contracts) it always gave us an idea where the industry was by looking at the aircraft prices of similar makes/models. This is obviously not going away with the move to digital.

But there was a more important element to the printed TAP for me personally. As maker of one of the cartoons in there (Chicken Wings), I really enjoyed the numerous comic strips people had cut out of the magazine and posted all over the FBO’s message boards and bathrooms wherever I went. What I found interesting and exciting was that it was never the same comic. It looked as if we had found something to laugh at for everyone in aviation at one time or another. That element is gone now and I will miss it more than most.

As a kid growing up in a large city with almost zero small airports nearby, TAP opened the door to aviation for me. Someone had left an issue lying around the restaurant I worked at and I was almost instantly hooked into the “dreamer” category. Also, as an avid reader I will miss the three times a month deliveries…sigh…at least they are still around and I can still read it on my Kindle, but I agree with you Paul, it just won’t be the same.

Yes, it’s true. Because of TAP, I did it. After scanning, then scrutinizing, then hemming and hawing, then dealing with pre-emptive buyer’s remorse, I did it. I walked past the open copy of Trade-A-Plane a few dozen times over about a week before I picked up the phone. After I called, I tore out the page on which the ad appeared and kept it on my desk. After the deal was done, the ad ended up in the binder with all the receipts and maintenance records. Oh, I did it using a digital source too, you know, BS dot com, but the experience was altogether different. The process Trade-A-Plane brought carried much more personal significance. Maybe it’s me. Your mileage may vary, as they say. I’ll miss Trade-A-Plane’s printed presence in the “terminal”/”pilots’ lounge” and all the other hangouts, municipally-provided and private, along the ramp and taxiways.

The USAF, Army, Marines, Coast Guard, and Navy are simply wearing themselves out. In reality/functionality, there is no distinction between the reserves, active reserves, and regular duty military. Entire state’s reserve units are deployed right alongside the regular military. Many states, should they have a local threat develop, would not have any reserves units available or within rapid recall since they are being used in lieu of the regular military. This includes enlisted support as well as all the hardware. We now have a very, very tired military with equally tired aircraft and all related ground support. So, even if you had anywhere near minimally, adequate staffing, the manpower and aircraft requirements (among all other ground-based military) would still be maxed out. The idea we have any “reserve” units is laughable.

These global “conflicts” are being waged by personnel ranging in age from early twenties to early fifties with a huge amount of vets in that 30-45 year old range due to the reserve deployments. Any former active duty vets that decides to re-up as a reservist ends up virtually active duty almost overnight. I am amazed at the number of vets I have contact with that have been participants in 6 or more deployments lasting a year or more. That is a huge amount of combat time.

Allowing former military and civilian pilots into the ranks without a reserve commitment with all its present global deployment, enlisted opportunities for flight training, instructing positions, etc would be a start. But the US is in serious trouble with a worn-out war machine being staffed by equally worn out personnel. And it will decades to get it back on track if it can be accomplished at all with all the present global unrest.

There is no easy answers to this very present dilemma. We tend to think that there is a magic “silver bullet”, that once used will stabilize the course and make everything better. Pilots are one problem, worn out hardware another, mechanical support yet another. Money to finance any of these much-needed improvements really does not exist. Nor do we have unified leadership, politically or militarily. And a national citizenship, largely disinterested in any of all these realities.

Prior to WWII, we had a lethargic economy, with the average citizen wanting to stay out of any world war. But when attacked, we did not have a worn-out war machine staffed with equally worn out personnel. We simply did not have one. Therefore, as Yamamoto noted, Japan has woken a sleeping giant.

Today, we don’t have the reserve, unused capability of resources including design and manufacturing that we did at the outbreak of WWII. Nor do we have a workforce that can rise to those challenges today for a lot of reasons we cannot discuss here. We are a military giant, albeit a tired Goliath…that can be brought down very easily for any number of reasons. And we are not alone. Our enemies are in similar circumstances.

Airshows today are not just a place for showcasing aerobatic, vintage, warbird, GA, and Experimental aviation. AirVenture is now the prime aviation recruitment center for our youth. So are all the AOPA regional fly-ins as well. Most fly-ins have a significant military presence. Next to every Embry-Riddle booth is the US military, with eager flight suit clad personnel willing to hoist any person into the cockpit of accompanying warplanes promising a surgically clean, Star Wars type of remote engagement, backed by every computer enhanced, night vision, virtual reality, goggle allowing us to kill by remote, with a push of the proverbial button. Fly a continuous, after burner glowing, low level routine to complete the recruitment process before the airshow, during the airshow, and the grand finale of the airshow. Pretty soon Rob Holland and his MX will be an afterthought, Patty Wagstaff who?, and Sean Tucker will be someone you see on You Tube while A-10’s and F-35’s claw the skies to keep the testosterone levels at an all-time high. And if you complain about all of the military hardware and flight routines, you will be considered unpatriotic.