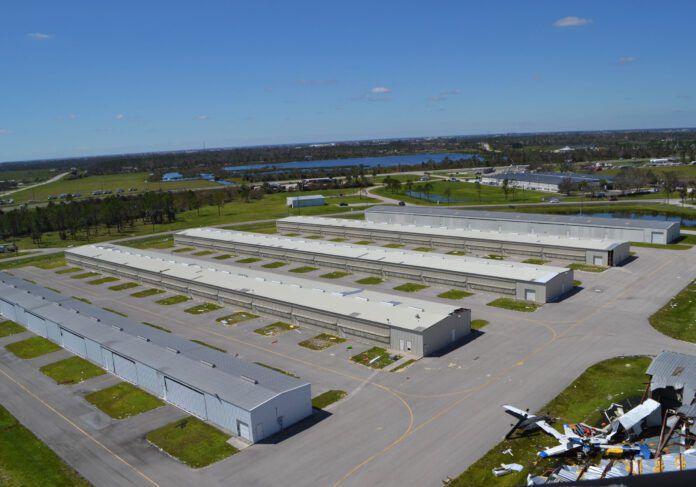 “There are no ‘storm safe’ hangers. Requiring something that does not exist is laughable.”

Embodied in this comment, which appeared in last week’s poll, is the sort of low-information that bedevils credible preparation for increasingly expensive weather disasters. The uninformed may enjoy a cynical laugh, but I can assure you a couple of hundred owners of hangars at Punta Gorda airport are breathing a sigh of relief. When Hurricane Ian swept through last week, their “storm safe” hangars remained intact and so did the aircraft inside. A potential disaster was instead a short wait for electric power to be restored and some debris cleanup.

As I reported in a previous blog, my home airport, Venice, was not so fortunate, despite being exposed to winds half as high as Punta Gorda experienced. Our entire hangar complex was damaged to an unknown degree, including the one sheltering our Cub. The city has locked all the owners out of the airport and stationed police to prevent access. If my Cub escaped undamaged, it may be awhile before I can confirm that.

I will concede that my choice of “storm safe,” driven by the need for brevity in a poll question, was a bit leading. You could ask what it even means and I would reply that it means hangars built to modern code that can withstand gusts to 155 MPH, as the Punta Gorda hangars did. That’s a strong Cat 4 but may as well call it a weak 5. The argument that no hangar could survive anything stronger so why bother strikes me as defeatist in the same way that people who don’t bother with storm shutters or impact windows live in a fantasy world where reality never intrudes.

“Too expensive,” is the usual argument. Really? My Cub partner, Bob, also has a hangar at Punta Gorda for his Lance. Like all of the T-hangars there, it was constructed after hurricane Charley flattened the place in 2004. Like most modern code hangars, it has a Hydro-Swing door and additional steel reinforcement. He pays $316.87 a month. In Venice, we pay $294.25 for an older hangar with sliding doors that are wholly inappropriate for hurricane country. That’s a whopping $22.62 higher. Five times as much difference would be worth it for a secure hangar.

Apart from a protected parking space, what’s the point of hangars anyway? They are a service airports provide in the interest of promoting and sustaining aviation, they attract business and planned correctly, they can and should provide revenue for the airport and the city or county. I haven’t examined Punta Gorda’s P&L, but they evidently structured the hangar deal to be both affordable for owners and profitable for the airport. Moreover, it helps with insurance loss prevention and keeps streams of shredded aluminum from fouling the neighborhood. What’s not to like? (And by the way, when those hangars get cratered, you may be paying for the cleanup. For hurricane Ian, FEMA is picking up the debris removal bill.)

Also in Punta Gorda’s master plan, which all airports have, are a couple of rounds of proactive investment in replacement bi-fold doors on hangars that have something less. It’s not clear which hangars these apply to because although the new T-hangars there largely escaped damage, larger commercial box hangars did not. These are a difficult problem because tall hangars are higher in the wind field and exposed to higher wind speeds and they have correspondingly higher windage. In the photo above, you can see the damaged box hangars at the top of the frame; the new T’s are, in comparison, tidy and apparently free of debris. One roof in another hangar block suffered minor damage. Punta Gorda, by the way, was in the hellish northeastern eyewall of Ian for an hour or more. Peak wind reported varies between 135 and 155 MPH, with 110 MPH sustained reported by a private weather station. Venice’s highest was reported at 82 MPH.

Hurricane Charley should have been a wake-up call and was for Punta Gorda. The airport had little choice since it woke up in a pile of debris. I watched Charley bear down directly on Venice that August afternoon, only to take its right jink up the Peace River, sparing Venice all but a few gusts and some rain. The message was lost on the city, for little was done to upgrade older hangars, albeit some new ones were built. They appear intact, but one owner emailed me Friday that he wasn’t allowed to access it. T-hangar upgrades were proposed in the master plan, with the state paying most of the cost. I don’t know why the work wasn’t done. The plan also called for a hurricane disaster preparation design set to provide faster response after a storm. If it’s being executed, I think most of my fellow tenants would agree that it needs a little work.

So once again, a big storm has offered a wake-up call, for all airports in the southeast, not just Venice and not just coastal cities. Punta Gorda has shown that an engaged airport management with community support can make secure hangars practical and economical. Owners have shown that the market is there, for I’m pretty sure Venice would support $50 to $100 more a month for hangars, if it came to that. And it probably needn’t. In Venice’s defense, the city has run hot and cold on supporting the airport and unlike Punta Gorda, it’s surrounded by residential areas that complain of noise and traffic. There have been efforts to curtail operations or even close the airport. But more airport-friendly communities should take heed. More intense storms are coming for you and will do significant damage inland, as Ian did in Florida.

As for owners, I would argue to disabuse yourself of the notion that better hangars can’t be built to protect your expensive airplanes. Punta Gorda is the test case. Airports may need to be jollied along by expression of demand for such things and would-be tenants may need to engage with airport management to put together deals that work. The point is, do this before you find your hangar reduced to rubble or cordoned off with access denied.