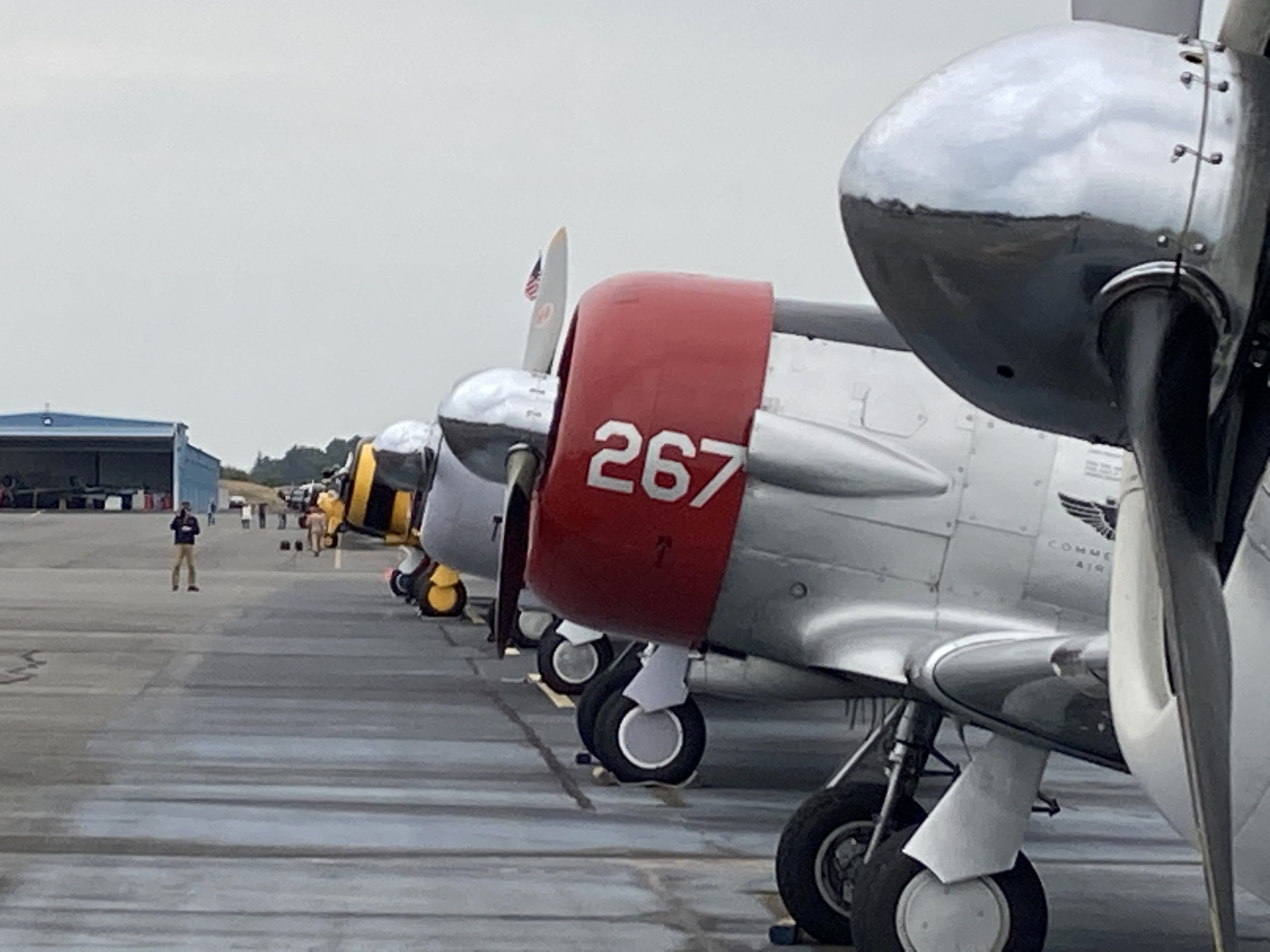 Editor’s note: The AoD flyover was intended to commemorate the formal end of World War II. It was scheduled for Friday, September 25 and postponed to Saturday due to weather. Conditions were still too poor on Saturday and the event was canceled.

World War II ended in Europe on May 8, 1945. Although victory in the Pacific Theater was three months in the future, with the fall of the European Axis powers the eventual outcome seemed certain; only the timing—and the cost—remained to be determined.

On Aug. 14, 1945, the end was determined, but not quite reached, with Japan’s unconditional surrender. The official end of the war was declared three weeks later, on Sept. 2, 1945, aboard the battleship U.S.S. Missouri, when the Allied nations formally accepted Japan’s surrender in Tokyo Bay.

Lt. Col. Thomas R. (Bob) Vaucher scored a front row balcony seat to that event when Gen. Curtis LeMay tasked the young B-29 Commander to lead a flight of B-29s over the Missouri as the surrender document was signed. It was a fitting choice, as Vaucher had received the first B-29 delivered by Boeing. LeMay promised MacArthur all flying B-29s would participate; 525 did, the largest mass formation of B-29s in history.

MacArthur spoke that day for Allies gracious in victory: “[It is not] for us here to meet, representing as we do a majority of the peoples of the earth, in a spirit of distrust, malice, or hatred. But rather it is for us, both victors and vanquished, to rise to that higher dignity which alone befits the sacred purposes we are about to serve ….”

On Sept. 24, 2020, Lt. Col. Vaucher, looking 50 years younger than his 102, rose and addressed the pilots and crews of warbirds assembled in Culpeper, Virginia, to commemorate the 75th Anniversary of those events. (Culpeper served as the staging area for the vintage aircraft to take a part in the event which was, unfortunately, cancelled due to weather.)

In a strong, clear, unwavering voice, this man who shaped much history and witnessed more spent twice as much time thanking others than telling his story.

Connie Palacioz was 18 years old when Boeing transformed aluminum and steel into B-29s. She knows because that’s how old she was when she riveted B-29s together in 1943. One of her airplanes spent 45 years in desert storage after a career in the skies. When that airplane was rescued for return to service, it was missing exactly seven of the hundreds of rivets Connie had set and planted. Connie joined the team of volunteers that brought that aircraft back to life. We know it today as the B-29 “Doc.”

Marine Paul Hilliard initially resisted assignment to the Navy’s air wing. He was 17 when he enlisted in the Corps in 1943, a senior in high school who secured his mother’s permission to quit school so he could serve. Marines, he knew, fought on the ground. But the Navy needed airborne radiomen and radar operators so Hilliard became one. Cross trained as a gunner on Douglas SBD Dauntless scout bombers, he completed 45 combat missions in the South Pacific.

Like Vaucher and Palacioz before him, Hilliard spent more time thanking others than reciting his story. In particular, he thanked, with emotion he was unable to suppress, Bob, Connie, and everyone else connected to the B-29 for helping end the war before the invasion of Japan that Hilliard knew was coming, and that he knew would be a dreadful fight. He didn’t mention that, after the war, he went on to build a very successful oil company and in June of this year, at 94, completed a successful two-year term as Chairman of the Board of the National World War II Museum in New Orleans.

As the assembled warbird pilots and crews prepared to brief the day’s practice sorties, it fell to a Brit to summarize what we’d heard. Mike Dale, former Royal Air Force pilot, former head of Jaguar’s U.S. operations, enthusiastic ambassador for Culpeper Regional Airport and passionate American, said, “I truly believe in American Exceptionalism. No one in the history of humanity has had the power to rule the world and hasn’t tried, except one nation, the USA. This is a tectonic change in human behavior. This sets this wonderful country apart from any other country in the history of the world.”

It is good that the 75th Anniversaries of V-E Day and V-J Day came at us in 2020. This is a year in which we need to be reminded who we are.