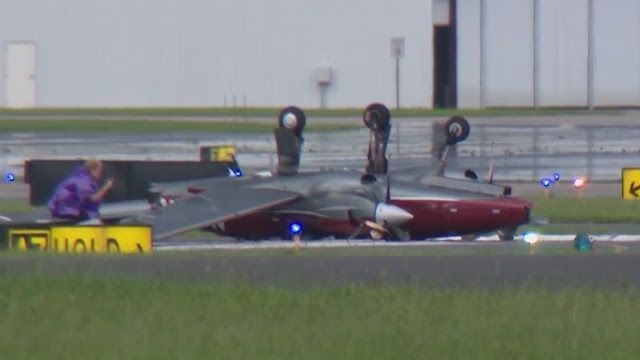 I doubt if there are many AVweb readers who, upon reading an accident report, don’t have one of two reactions. (a) Hey, I already knew this and I’d never do that or (b) I didn’t know this, I’ll be careful not to do it in the future. “This” is whatever happened in the accident being described. In my case, upon reading the freak fatal ground accident of a Diamond DA42 in Orlando earlier this month, my reaction is, “hell, I already did that myself.”

Before I get to that, here’s the preliminary report on the accident. A student and instructor were taxiing out for departure at Orlando Executive with a thunderstorm building to the north and east. During the taxi, the wind was 150 at 11 knots, gusting to 16 knots. That’s hardly a no-go. Sixteen minutes later, while they were in the runup area, what appears to be a microburst drove the wind to 54 knots and flipped the aircraft over in place. The student—an experienced pilot from Nigeria—was killed, the instructor with him seriously injured.

Naturally, from the comfort of an armchair, the righteous “how could they have been so stupid?” is understandable. Well, let me tell ya how. Florida leads the U.S. in thunderstorms and lightning activity, equaled only by equatorial Africa, where, ironically, the student was from. It is fairly common in Florida to operate near thunderstorms if the plan is to fly away from the weather to a known clear area, or if weather isn’t severe or building. Everyone will make a different judgment on that and there is no one size fits all. What you might be comfortable with is not the same tolerance I might have.

The FAA recommends 20 miles separation from strong storms, but no closer than 5 miles. I suspect many pilots in Florida are between the two, biased toward closer when conditions allow. As long as clear weather is ahead, I’ve flown within 10 miles of storms on the upwind side. There’s a lightning and turbulence risk, of course, but a low risk of hail in Florida because the freezing level is so high. Looking at the radar loop, there was a large area of convection to the northeast, building over Orlando International. I honestly can’t say I would have departed in such conditions. Can’t say I wouldn’t, either, because I once did.

Coincidentally, it was at Diamond Aircraft’s factory in London, Ontario. Ontario doesn’t get as many thunderstorms as Florida, but those it does get are often in mesoscale lines, with tops in the 50s and 60s and high hail potential. I was busy working on a story and photos when one of my hosts mentioned an approaching line that looked pretty bad. They suggested I hurry up to the FBO and taxi the Mooney down to the factory hangar. I got a ride up the ramp and just as I was getting into the airplane, the temperature dropped and the breeze picked up. The gust front. Then I realized I was rushing things and had to get back out to see if I’d removed the chocks. Nope. In my haste, I threw them in the airplane, thus stealing the FBO’s clearly labeled chocks.

The taxiway down to the factory is about 4000 feet, give or take. The wind, which soon gusted to the mid-30s, was a quartering tailwind from the right. It was levering the tail up and lifting the right wheel a little. I didn’t quite know what to do about this. Should I speed up the taxi and reduce the relative wind? Do the taildragger trick of diving away from a tailwind? Stop and turn into the wind? I’m not sure what I did, other than skid and bump along the taxiway with, to paraphrase a famous Canadian, the wind turning the minutes to hours.

My salvation was the long taxiway to the factory ramp, which is sheltered by a woodline. It was contributing windblown leaves and small branches but I dodged all that. I taxied the Mooney straight into the open hangar and chocked it. They pointed out I had stolen the chocks. In times of dire stress, morality is situational on bits of triangular lumber. It rained like hell, the wind blew, but no hail.

Having cheated death, was I more emboldened to repeat the feat or chastened into a never-again moment? I have no idea. It depends on the situation, I guess, which is the essence of GA flying. There’s no cookbook on risk assessment and I reject the argument that there is. Anyway, I was pretty sure even if the airplane upended, it wouldn’t kill me, unless it’s possible to die of embarrassment.

Did the two pilots of the DA42 at Orlando think that? Or did they even consider it at all? Would you? And here a word about Diamond’s crashworthiness. In 2011, I undertook an exhaustive safety comparison of popular GA aircraft crash fatality rates. Diamond swept this field with a 0.35 rate for the DA40 and 0.54 for the DA42. That compares to 1.2 (then) for GA as a whole and 3.25 for the Cirrus line. Since 2011, however, thanks to improved training, the Cirrus rate is much lower. I have no reason to believe the Diamond rate is any different now, but I’ll make that conditional upon reviewing the intervening 10 years of accident data.

A poster in my Facebook feed said there is good evidence that Diamond aircraft aren’t as crashworthy as other models. I would contest this, given the company’s overall excellent safety record, low number of crashes and virtual absence of post-crash fire. Still, in the Orlando crash, someone died who shouldn’t have expected to in a stationary rollover. What happened here?

The DA40 and DA42 have, in effect, a roll bar consisting of a robust composite hoop that runs from the sides of the fuselage slightly aft of directly over the pilots’ heads and serves to anchor the forward-tilting canopy. Did this somehow fail? Was it not adequate for the loads encountered? The answers await further investigation by the NTSB.

When the Diamond aircraft first appeared, every review we did raised complaints about the egress limitations of canopies and upward opening doors. This is true of the Socata line and, to a degree, the Columbia and Cirrus aircraft. We sometimes worried that these would trap people who might have otherwise escaped and survived. There is no persistent pattern of this happening. Yes, the Diamond airplanes have upended—although it’s not common—but this accident may be the first fatality related to lack of overhead protection.

If that’s so, Diamond may want to look at this design and see how it might be improved. It seems to me that it would take an enormous impact load to fail that overhead bar. Meanwhile, this is a point of departure for the rest of us to consider the state of restraints in our aircraft. One of the Diamond accidents involved the failure of a seatbelt fitting. There’s no reason that should ever happen in a properly maintained airplane.