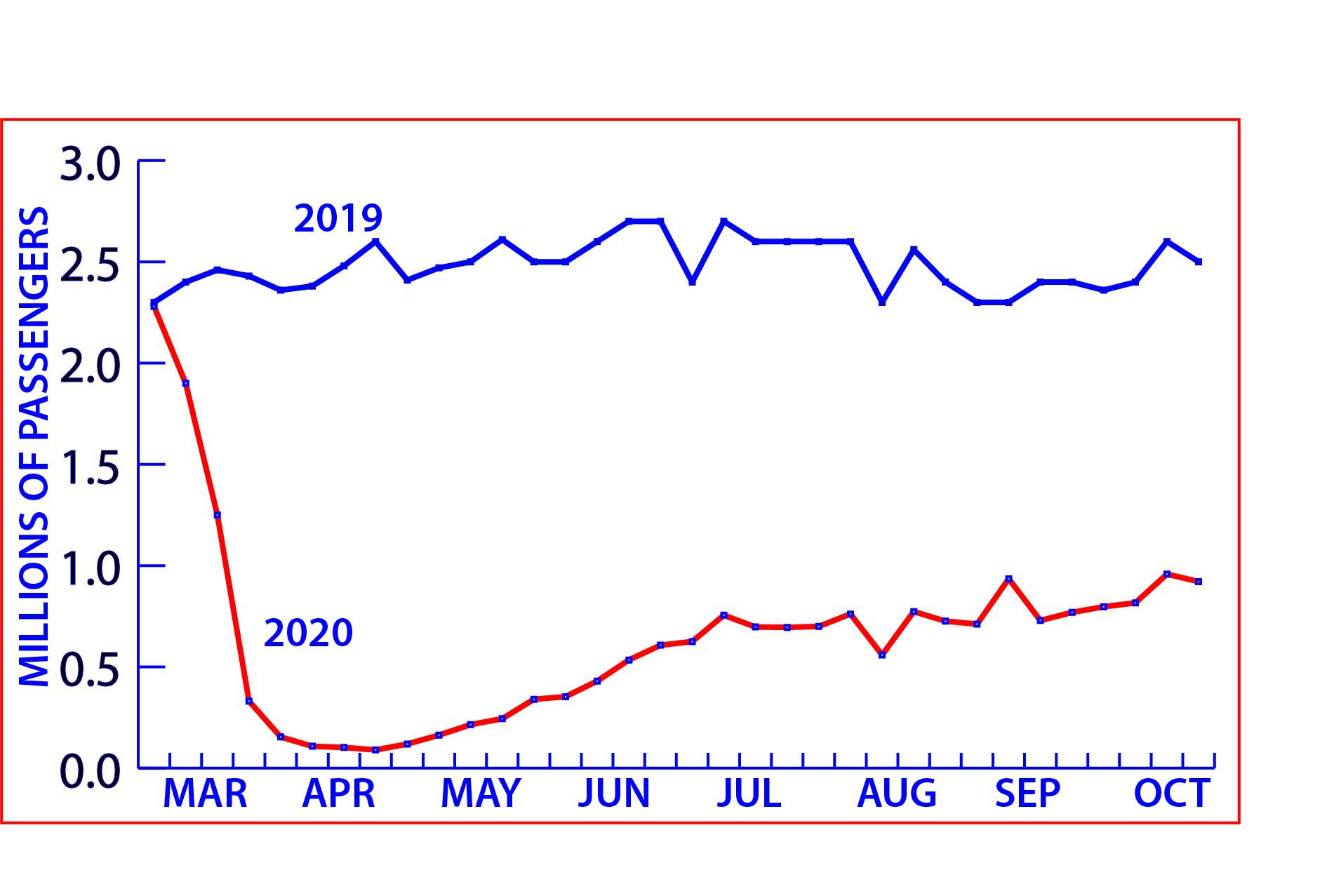 If you could put a single date on the airline disaster that is the COVID-19 pandemic, it would be March 23, 2020. On that single day, after a week of brisk declines, passenger traffic through TSA security went off a cliff. The week before, at 1.25 million passengers per day, it had already been about half the 2019 levels. On March 23, it plummeted to 331,000, just 14 percent of the previous year.

As staggering as that was, it got worse. On April 14, 87,534 passengers checked in—96 percent lower than the previous year’s volume. If anyone predicted this, I haven’t seen the verified quote. What’s almost as surprising is how little the passenger traffic has recovered. The chart at left shows the directionality. Best case, only a little over a third of the business volume has resumed. And if you extrapolate that line out to meet a like line drawn through the previous year’s traffic, it intersects in two years, if it intersects at all. Delta recently warned investors it would be at least two years to recover lost business, but that might be optimistic.

The travel industry is bracing for restructuring and, as reported by The Wall Street Journal, many believe the lucrative business travel that helped sustain the profitable airlines won’t be coming back at all, much less soon. Businesses are discovering the Zoom call will do in lieu of a trip and it’s both more efficient and cheaper. And if you can remember not to stand up, you don’t even have to wear pants. As airlines restructure, some things appear likely. Higher fares, fewer flights and more connections. That might not help much in luring passengers back.

Currently,  the return in volume doesn’t even qualify as anemic. What are people afraid of? Is the fear justified? Increasingly, the answer appears to be no. What data we do have—and that’s not much—shows no clear pattern of infections among passengers and crew, although there have been some. Last month, the airlines reported employees were reporting a lower rate of infection than in the public at large.

The airlines are making a show of spraying the cabins with disinfectants and some are still pledging to keep a middle seat open, but I’m not sure how long that can go on. Just today, Southwest announced it will end the middle-seat blocking in December and Delta will do the same early next year. Sixty percent load factors are flights to financial ruin, even if they fly through Atlanta or Chicago for connections. United and American have already started filling the cabins. Or trying to.

And speaking of United, the airline partnered with the Department of Defense to conduct this study that revealed that the chance of acquiring a COVID-19 infection on an airliner is essentially nonexistent. It found that 99.99 percent of marker particles released in the cabin were scrubbed away by the cabin filtration in about six minutes. While I’m somewhat skeptical of the claim, I agree that the risk of infection is vanishingly small and personally, I wouldn’t worry enough about it not to fly. That study, by the way, assumed masks were in use.

For the exceptionally fastidious and the inveterate worrywarts, some travel experts are recommending masks, eye protection, gloves and sanitizer to clean the tray table, the seat and so forth. I’ll pass on some of that. Fomite transmission hasn’t been found to be a factor in COVID-19 attack rates and if the airlines are squirting some potent sanitizer into the cabin after every flight, that’s good enough for me when combined with a mask and a bottle of hand sanitizer. I’m all for habitual, reasonable mitigations, but I’m not gonna drive myself to the edge of sanity. I suspect one reason so many people haven’t returned to flying is related to that. It’s just easier to stay home or drive on medium-range trips, even if the rational mind concludes the risk isn’t high on airplanes.

And if you’re still a mask doubter, here’s another study on the efficacy of masks, specifically on airplanes. Unfortunately, it’s a small study with not that many flights tracked. But the data, buttressed by numerous other observational and empirical studies, supports the belief that masks are an effective mitigation, just not foolproof. Those who insist otherwise are—and I won’t sugarcoat it—bordering on willful ignorance.

This article says you can’t really buy N95 masks. You sure can. Buy them all day for about $3 each. Some are KN95s. I have a small supply and wear them exclusively where masks are expected—stores, businesses, the gym—but not outside. I’ll wear them on airliners when I get on one next, but I’m on the fence about doing the same in small aircraft cockpits. An important caveat: These N95s aren’t medical grade, they’re non-vented industrial masks. What they lack is the hydroscopic coating that protects against liquid (blood) intrusion the medical types have. It’s a small tradeoff for the effective filtration they offer, although they’re not especially comfortable.

Tampa International, my airline airport of choice, does a good job of marketing itself. I recently got a newsletter saying with traffic rising, they’re opening up more concessions. Evidently, as has become a familiar sight everywhere, their mitigations include distancing markers on the floors and wrap-around sneeze shields. Combined with masks, this seems reasonable to me, unless the terminals become packed again and then maybe not.

One thing gives me pause. While this is assumption of personal risk, it’s not just personal risk. When you expose yourself to infection risk—however small—you also potentially endanger others. In many states, infections are on the rise and throughout the seven months of this trial, my personal behavioral standard has been to do all I can to avoid requiring hospital care that would further endanger medical workers, many of whom I count as personal friends.

The calculation I’m making now is that I deem the risk acceptably low and will fly commercially when the need arises. So far, it hasn’t. But I suspect it will soon enough. Come spring, if a vaccine is available, the equation may again shift and then we’ll be into speculating about Aero and Sun ‘n Fun.

For now, I’m trying not think that far ahead.