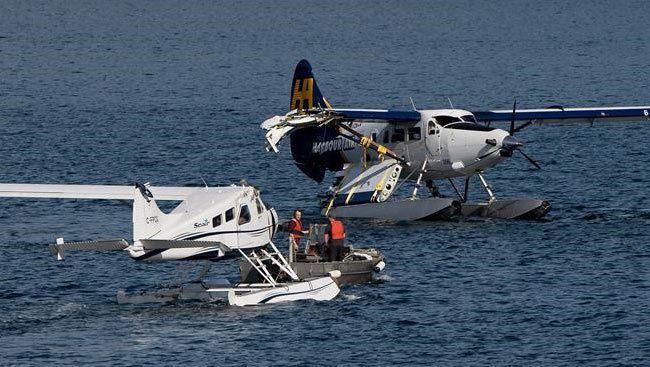 When some guy went on a demolition derby with a 70-year-old Beaver floatplane in Vancouver Harbor last week, it raised inevitable questions about the security of the seaplane terminal and the security of aircraft in general. News anchors were in full furrow about the fact that someone could just waltz into the terminal and take a joyride in a commercial airliner. Did you know you don’t even need keys to get them started? A few even flashed images of that Q400 tragedy in nearby Seattle last summer when an airline employee managed to steal the airliner as the vehicle for an elaborate suicide.

Unauthorized and even accidental operation of aircraft is so rare as to be statistically insignificant but it does happen. In the Q400 incident, the ramp attendant clearly had the background knowledge necessary to ultimately do aerobatics over Puget Sound before diving into the uninhabited portion of a small island. A few months ago, a teenaged girl hopped a fence and got one engine of a King Air going at Fresno Airport. It crashed into a building before it could cause any real damage. A few years ago, a six-year-old boy managed to flick enough switches in the right order to start the engine of a helicopter on static display at an airshow in Minnesota. The operators of the helicopter were able to shut it down but not before a couple of people were hurt.

The Vancouver incident is different in that it was clearly a deliberate act and could not have been carried out without the culprit knowing exactly what he was doing. The biggest security feature most aircraft have is that it normally takes at least some knowledge or skill to get them going. Those who have that skill also have a pretty good appreciation for the consequences of accomplishing that. But if your average ignition-key-equipped Cessna 172 is secure by that standard, the De Havilland Beaver is the Fort Knox of joyride prospects. Consider this description of the starting procedure for the wonderfully capable but notoriously cantankerous Beaver from Vancouver Island pilot Kevin Maher, who divides his time between operating the round engines of a 777 and those on Beavers, Stearmans and T-6s.

“As I read that somebody had tried to steal a Beaver in the middle of the night and ended up ramming two other aircraft tied up at the dock, my initial reaction was surprise that they were able to get it started. I have over 3000 hours of round engine time and starting them in the cold requires considerable knowledge, skill, and sometimes a little luck.

“The fuel tanks in a Beaver are in the belly, so the first thing you have to do is use the wobble pump to get pressurized fuel up to both the primer and the carburetor. Then while wobbling with one hand you prime about 4 shots with the other hand—the primer being located unusually on the lower door sill beside the pilot’s seat. It was designed this way so that the engine could be prepared for starting while still tied to the dock. Now with the mixture set to ‘rich.’ the guessing game of ‘where do I set the throttle’ begins. This is further complicated by the fact that all the aircraft are slightly different—hard against the idle stop and the engine won’t suck enough air through the updraft carburetor to run. Too far forward and the engine will backfire and also probably not run—or catch fire if you have overprimed it! Cracked half an inch is about right. Now you turn the battery master on and engage the spring-loaded starter switch. The magnetos have no impulse coupling and the strength of their spark is dependent on engine RPM. So you generally wait for the starter to turn one engine revolution and come up to cranking speed before turning the mags on with your other hand. But wait too long and the engine will have purged itself of the prime and you will have to stop and re-prime it.

“At this point first one cylinder fires, then two, and slowly the entire Pratt & Whitney symphony comes to life. But in a cold weather start, not for long. Keeping it running now becomes the trick. Quickly you find yourself doing more wobble pumping with one hand, often using a slow injection of raw fuel with the primer with the other hand, and usually wishing for a third hand to make a subtle adjustment to the throttle. The carb heat system on the Beaver is very effective and a dose of heat just after the engine has started also helps by enrichening the mixture.

“The chance of a student pilot with a few hours getting a Beaver started on a cold morning are almost nil. Whoever tried to steal this airplane had been around them before in some capacity. Bringing these old motors to life on cold mornings is one of my most enjoyed moments. Hopefully the damaged aircraft can be repaired quickly so many others can also enjoy doing so.”

The airlines involved and the police aren’t saying anything and that tells me they probably know a lot about who is behind this and I suspect an arrest is imminent.