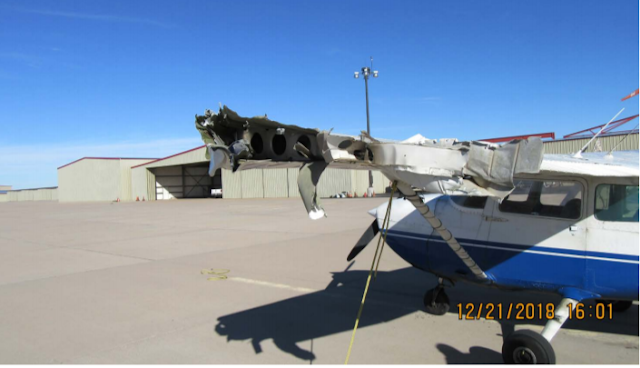 The NTSB has released its factual report on a 2018 incident that ended with the pilot of a Cessna 172 coaxing the aircraft ten miles to a safe landing missing four feet of the left wing and most of the trailing edge. The pilot was uninjured. The aircraft was on a pipeline patrol south of Abilene, Texas, on Dec. 21, 2018, when it hit a tower guy wire. The pilot was able to maintain control of the plane and land at Abilene.

The aircraft was on an inspection flight from Temple, Texas, to Snyder, Texas, and had been in the air almost two hours when the pilot, who did not have an observer with him, felt the plane “pull to the left,” according to the NTSB report. He later said he was looking down at the time, writing observation notes, when the incident occurred. He said he never saw the wire. The impact took off the section of wing just outboard of the left aileron and the trailing edge peeled inboard almost to the fuselage. The pilot later reported that in the absence of a second crew member to note observations, he could have waited to make his notes.