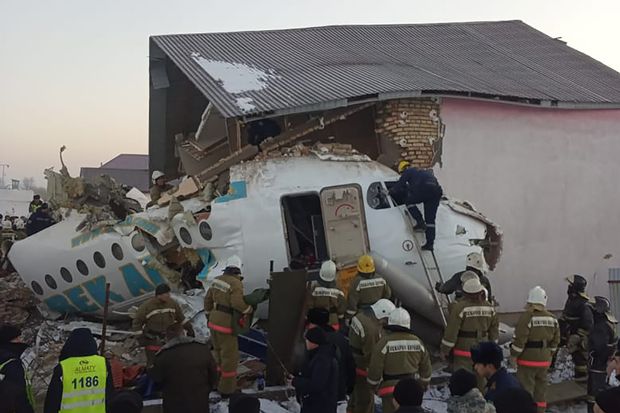 The president of Kazakhstan has promised those who end up being blamed for the Friday crash of Bek Air Fokker 100 in a village near the city of Alamaty “will be severely punished in accordance with the law.” Kassym-Jomart Tokayev also said the survivors will get about $9,000 each in compensation. The airline has also been grounded pending the investigation. The aircraft went through a concrete wall and hit a building while trying to take off from Alamaty Airport with 98 people on board. At least 12 were killed and more than 60 were injured. The captain was reported among the dead. The flight was heading for the country’s capital city of Nur-Sultan.

The plane came down in the village of Almerek and came to rest with the nose inside the building. Kazahkstan has a better than average reputation in aviation safety for countries in the Russian sphere of influence and this was Bek Air’s first crash. It operates eight Fokker 100s, which was a modernization effort that began in 2012. The Fokkers replaced a fleet of old Russian airliners and even a BAC 111. The government has set up a commission of inquiry to investigate the crash.