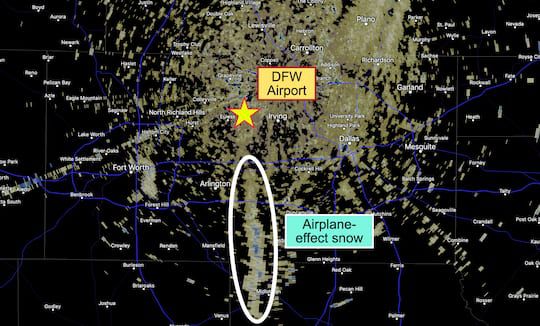 It was snowing south of Dallas earlier this week but don’t blame the weather, at least not entirely. The area under the southern extended centerlines of the Dallas-Fort Worth International Airport’s four main parallel runways got a dusting of snow thanks to a phenomenon known as airplane-effect snow, according to the Washington Post. Under the right circumstances, including a sharp temperature inversion, water vapor from the engines becomes supercooled and nucleate on the tiny bits of soot coming from the engines and form snowflakes, which then drop on weather-weary people below. It’s a rare phenomenon but virtually unheard of as far south as Dallas.

However, much of Texas joined the entire central portion of the country under a more generous than usual export of Arctic air from Canada. It’s a dry cold that doesn’t produce snow but the jet exhaust provided the missing ingredients. It was about 24 degrees Fahrenheit on the ground during the surprise snowfall. A similar snowfall was reported in Oklahoma and there was also lake-effect snow, a similar phenomenon, near Tulsa, the Post reported. In case residents can’t tell the difference, up to 10 inches of the regular stuff is forecast to fall by Monday and the temperature won’t get above freezing until next Friday.