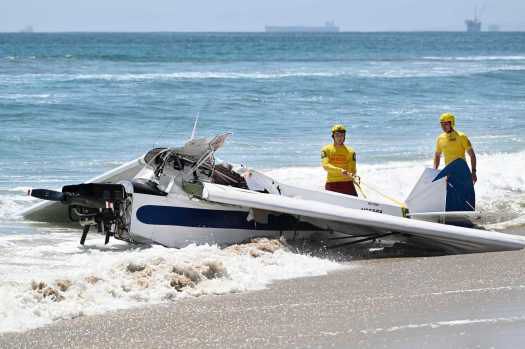 There was plenty of handy help available when a banner-towing Cub ditched off Huntington Beach, California, on Friday. The J3C-65 registered to Seashore Advertising Corp. went in the drink about 100 feet offshore next to the California Surf Lifesaving Junior Guards Championship. The Cub reportedly lost power. It was between events so there were no competitors in the water but to their credit, they headed for the messed-up airplane and the pilot, who was sitting on top of the plane.

The kids were called back but there was plenty of other fully qualified help around to perform a thorough rescue. The pilot had minor injuries and was sent to a local hospital as a precaution. The Cub is a write-off. ARFF World posted this video of the ditching.