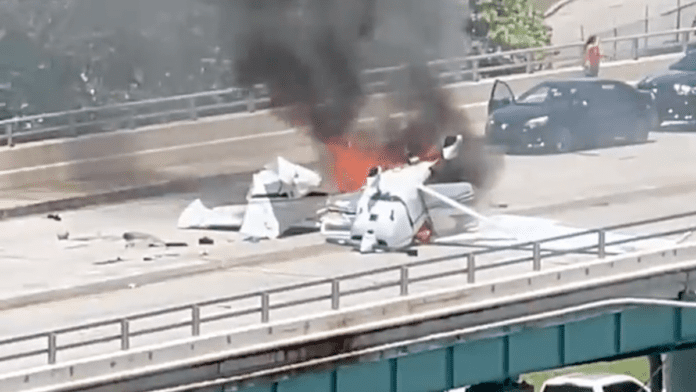 The fuel tank selector valve was between Both and Right on the Cessna 172 that collided with two vehicles in an emergency landing on a bridge in Miami on May 14. The crash killed the pilot and injured two passengers and five people in one of the vehicles. That was the only obvious anomaly with the aircraft mentioned in the NTSB’s preliminary report on the accident. The full report is copied below. Although the fuel valve was out of position, there was fuel in the line to the carburetor, which was functioning normally, the engine had compression on all cylinders and the ignition system was fine. The throttle was pushed all the way in, the mixture was full rich and the carb heat was turned off.

The plane took off from Homestead Airport and landed at North Perry Airport in Hollywood where the pilot added 11.2 gallons of fuel and met the passengers. The NTSB checked the fuel at the airport and found no contamination. The plane took off for Key West and was flying below the Miami Class B along the waterfront at 1,200 feet when the pilot called a MayDay, saying he’d lost engine power and was going down. “There’s three souls, there’s um a road right here … a little bridge, I’m going to make that, 54Z,” the pilot said in his last radio transmission. The plane landed straddling the median of the four-lane bridge, hit a vehicle from behind, crossed the median and collided head-on with a van before flipping over and catching fire. The pilot was a Miami tower controller.