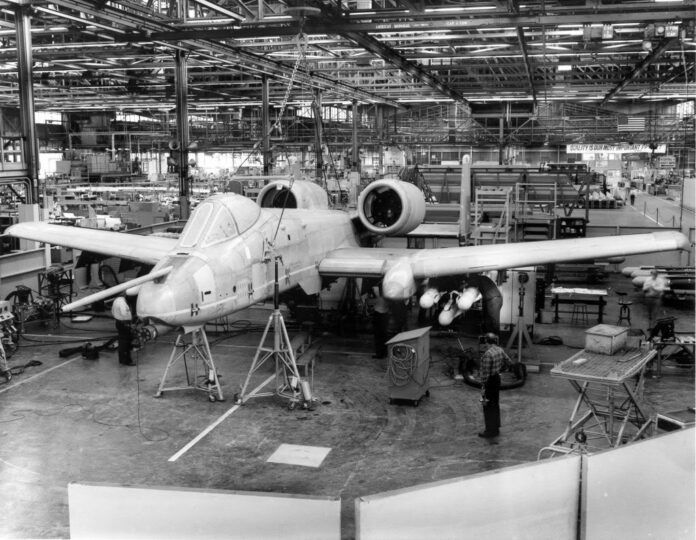 When two PA-48 Enforcers arrived at Edwards AFB from Piper in Lakeland in 1984, the USAF wouldn’t establish a formal “Joint Test Force” (later, Combined Test Force) for them. The two airplanes were assigned directly to the Test Pilot School for evaluation. The ‘golden arms’ loved the things. One is now in the Flight Test Museum and there’s one at the NMUSAF in Dayton.

Here’s some fun tidbits. The A-10 was the first project where I was in charge of the test instrumentation systems on the climatic test airplane. At the McKinley Climatic hangar at Eglin AFB, FL, we cold soaked the airplane for several days then did a start up and simulated flight INSIDE the hangar. Ultimately the pilot fired 30 rounds out of the GAU-8 into a long bullet catcher inside the hangar. My job was to measure how fast the gun spun up to full speed after the cold soak. One of the rounds didn’t like being warmed up and fractured; two pieces went right through the hangar door never to be seen again. Fortunately, the safety officer stopped traffic passing by the hangar during the test; no injuries resulted.

Early on, it was discovered that long bursts from the gun would eject huge amounts of gun gases which would be ingested by the engines causing flameouts. The climatic test airplane — 369 — wound up crashing on the range at Edwards for that reason. The pilot — then Maj. Rusty Gideon — survived but was injured seriously in the event.

Despite all the Monday morning quarterbacks poo pooing the airplane, it was purpose built and does work. A friend’s son did five tours in one in the Middle East and loved them. As I said in the other article, on Monday at a Memorial Day ceremony, I spoke with a Marine grunt (he had it tattooed on his arm along with his rank), who said he’d been saved by one in the Middle East. Getting rid of them would be a gigantic mistake IMHO.

It’s interesting how often it’s the planes that no one wants that actually end up out-living and out-performing the fancy planes (often designed as one-size-fits-all) that were meant to replace them. There’s something to be said for purpose-designed aircraft that are built robustly. They might not be the prettiest planes, but the get the job done.

Not bad, considering it’s basically a solar powered RC helicopter. Oh, and it’s 135,800,000-ish miles away on another PLANET, different atmospheric conditions including lots of dust to obscure the solar panels.

Can your helicopter do that? I thought not.

Cute. What did that flight just cost taxpayers? What was the ROI to taxpayers? If there is none, it should be privatized and our crushing taxes reduced.

Really cool stuff. What a testbed for future tech. It’s amazing to have the opportunity to do this and spur the next level of technology. Amazing work from the folks at JPL!

Poll: Should STOL Competitions Be Regulated? And By Whom?