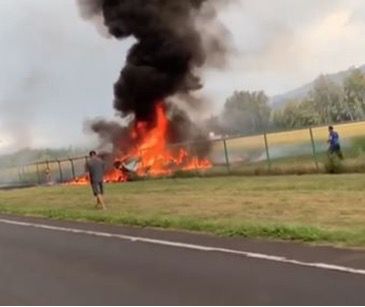 Eleven people were killed Friday night in the crash of a King Air 65-A90 aircraft flying a skydiving operation in Hawaii. The aircraft crashed about 6:30 p.m. on Oahu’s North Shore shortly after takeoff from Dillingham Airport and burned after impact.

All 11 occupants were pronounced dead at the scene, officials said. News reports said six were employees of Oahu Parachute Center and five were customers on the flight. When firefighters arrived the crash site, it was fully involved in flames. “This is the most tragic aircraft incident that we had. We had some helicopters with the military but this is a civilian plane that went down and with that many people on board,” Honolulu Fire Department Chief Manuel P. Neves  told CNN affiliate KGMB.

Witnesses reported that the aircraft may have experienced problems during the takeoff roll and appeared unsteady on the runway. “We saw big smoke. We saw a big fire and firemen trying to put it out—crazy,” witness Justin Kepa told CBS affiliate KGMB.