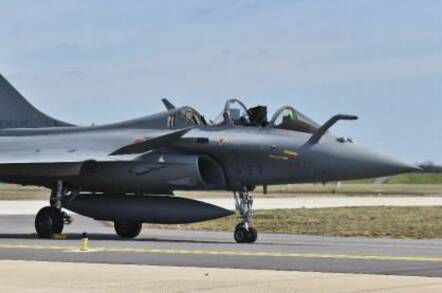 An unwilling and unwitting passenger in a high-performance fighter accidentally pulled the ejection handle during a retirement “gift” flight in France a little more than a year ago, triggering an investigation that revealed a sloppy approach to conducting familiarization flights.  As we reported last March, the man suffered back injuries when he mistakenly launched from a French Air Force Rafale after takeoff from Saint-Dizier 113 air base in eastern France on March 20, 2019. Early reports said he was a journalist on a familiarization flight but he was actually the reluctant recipient of a farewell flight when he retired from a French defense contractor. According to a translation of the air force’s report on the mishap, the terrified pensioner was not only personally unprepared for the flight, he was not properly strapped in or dressed and that contributed to the incident.

Four of the man’s colleagues at the company concocted the sendoff and the retiree told investigators that although he had never wanted to take a flight in a fighter, he succumbed to pressure from his work friends, one of them a former air force pilot, and agreed to go. The report says he passed a medical check four hours before the flight with the proviso that he not undergo any negative Gs, a detail not shared with his pilot. He put on his flight gear himself, incorrectly as it turned out. He didn’t put his anti-G pants on properly, and he left his helmet and oxygen mask unsecured and his visor up. He also failed to properly tighten his seat straps. Before engine start, his smart watch recorded his heart rate at between 136 and 142 beats a minute.

The pilot did a normal plus 4G military style takeoff with a 47-degree climb angle and as he pushed over to level out at 2,500 feet, his woefully ill prepared passenger lifted out of his seat under negative 0.6 Gs. He reflexively grabbed the ejection handle and things got windy. The ejection system was set up to fire both seats if one was activated but the rear-seat ejection damaged the front seat actuator and the pilot stayed in the aircraft, which had no canopy. The passenger landed safely and the pilot was able to fly the aircraft back to the base. A long list of recommendations resulted from the investigation.