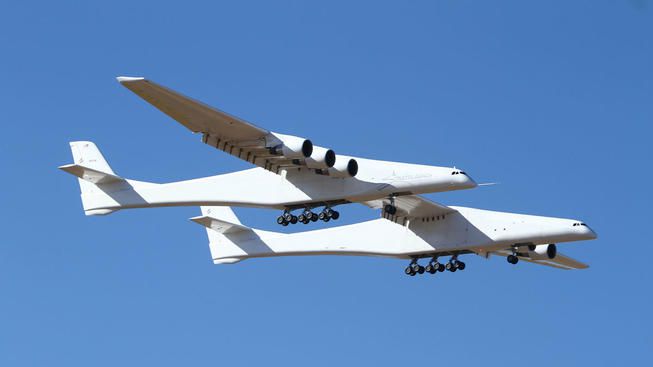 The asking price for Stratolaunch, the enormous aircraft intended to launch commercial rockets, has reportedly been set at $400,000,000, including all the facilities, equipment and intellectual property, according to CNBC. Stratolaunch has not commented on the report. The company, owned by the late Paul Allen’s holding company Vulcan, had intended to enter the commercial launch business with the unique platform, which was designed by Burt Rutan. The six-engine, two-fuselage behemoth has a wingspan of 385 feet and has flown just once.

The plane was purpose-built to carry a rocket between the fuselages and air launch it after reaching about 40,000 feet. Stratolaunch envisioned less expensive and more reliable launches for the burgeoning market for low earth orbit satellites used mainly for communications and internet services. Sir Richard Branson’s Virgin Orbital is launching a similar service but uses a former Boeing 747-400 airliner as the launch aircraft. There is no word on whether there are any potential buyers for the one-off, single-purpose aircraft.