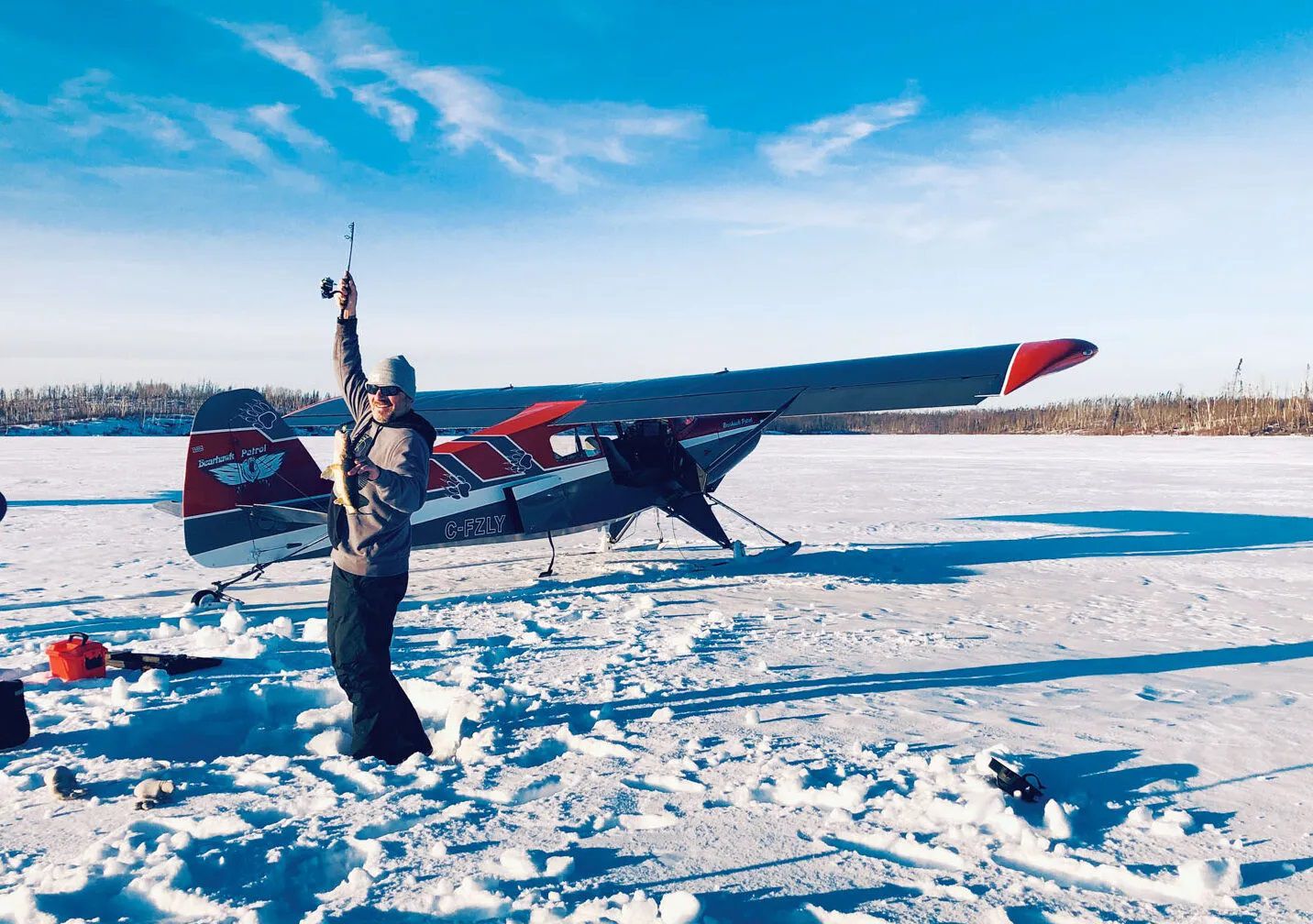 At workweek’s end, winding down only to wind back up might seem antithetical to that hungering for a few days’ break. But for Mike Silvernagle, this routine makes perfect sense. The responsibilities of managing his construction business actually compel him to welcome the end of the typical workweek with yet another set of projects. The many projects inside his hangar may seem grand, but by comparison they are quite small compared to the large-scale construction jobs he runs during the week. For Mike, the airplane builds are the small stuff, at least with regards to easing the worries on his mind.

Moreover, Mike likes turning his airplane building projects into spring-loaded adventures. Another way one might look at it is, building airplanes enables him to spend his winding down with Mother Nature—Earth’s grandest builder. To admire her work, to soar above and lose oneself in the middle of her earthly paradise, this time is the most constructive in his view.

Starting in 2017, Mike set out to build a Bearhawk Patrol for the express purpose of flying the backcountry in his native Saskatchewan. The Patrol was his first aircraft project from a kit, and the result is a spectacular one-off example of the Bearhawk lineup. Around the same time as the aircraft first took flight in 2018, Mike was enlisted as the Canadian distributor for Bearhawk Aircraft, the model line’s manufacturer of kits and parts. Mike’s enthusiasm for everything Bearhawk is self-evident, and he’s well acquainted with how these aircraft are put to use.

There are countless places for fishing in Upper Canada, though Mike numbers three as sufficient for his preferred form of the sport—flying in. Saskatchewan is a province with no natural borders; it is marked by prairies of grasslands, plains and lowlands stretching in every direction. By all counts, it’s an earthly paradise, uniquely Mike’s own Shangri-la. This particular geography is the why for of the region’s many lakes. And by December 15 every year, they are frozen solid.

This past winter, a trio of airplanes, two of which were Bearhawks, took to the tundra despite the freeze-over and raffish extreme cold temps. In addition to Mike’s Patrol, an Experimental 4-Place Bearhawk utility aircraft and a Cessna 185 went along for the temptation. Mike had previously owned and flown there in this same C-185.

Tongue-in-cheek, Mike pointed out, “The 185 owner was previously freeloading off me.” Now both fisherman have their own skiplane aircraft. Evidentiary proof also exists that Mike enjoys the company of friends as much as the sport of flying in for fishing.

The trip was to be a proving ground for the new C-185 owner as he had previously never flown on skis. However, his prior floatplane experience would pay off as the aircraft was on amphibs first, according to Mike.

“I went down the Bearhawk road six or seven years ago,” Mike explained. First, he purchased a completed 4-Place Bearhawk from its owner/builder. He later bought the Bearhawk Patrol kit as a companion to the 4-Place. Both he conceived as upgrades to his admiringly steadfast C-185.

Mike recalled his very first skiplane fly-in, “It was -15° F (-26° C). We landed on the lake with a generator and a tent. We almost turned back twice due to moisture inside the cabin that was freezing on the windshield. After finally arriving, we set up the tent, started the generator and plugged the plane in. Temps warmed up to a comfortable 10° F (-12° C) during the day,” he effused, “and we were fishing in hoodies.”

This type of adventure has long been a dream for Mike, as well as his convincingly like-minded flying companions. “To go where nobody would go,” he asserted, implicating the challenge to be greater than the simple idea.

Mike pointed out, “There are definitely things you worry about—such as wings snapping off in the extreme temps and engine health.” Planning for running an engine in severe cold requires advance preparations including preheat and controlling airflow. Dressing the pilot properly involves wearing full skin suits. One of Mike’s favorite attributes of his Bearhawk is its heated seats. He also points to the autopilot as a key component, much more than a luxury, to his backcountry flying excursions. An autopilot allows a pilot time to tend to and monitor everything in the engine compartment as well as the environmental variations on the outside.

Home Away From Home

Having access to a cabin on a skiplane excursion is a step up from sleeping in a tent. Mike’s pad is six miles from “real” land. “While it may look like a peninsula there’s no road,” he said. “It is boat or fly-in access only,” making it literally a pad. The shelter is a solid wood log cabin with wood heat gathered from the trees around. On arrival, one must auger through the ice to pump water into the cabin. With no electrical lines, he found that “solar power offers a workable solution.”

For a bit of extravagance, there’s a hot tub. The water gets to 105° F (41° C) by way of a wood fire beneath. While the pilots are warmed and sheltered, the skiplanes are left exposed. Therefore, at night it is necessary to cover the whole plane. Pilots are up at 5 a.m. to fire up the generators. This delivers preheat to loosen up the engine oil and dissipate the moisture camped inside. Two or three hours later, Mike and crew huddle again with their planes to unstick the skis and set up for fishing alongside their ski-footed fowl.

Next to the main cabin, there’s also a guest cabin, but according to Mike, no neighbors for about six miles. The 26 miles of lake are accessible via boat in the summer. When flying in during the thaw, Mike moors his floatplane on an island and arrives at the cabin via a canoe that’s left there year round.

Presently, Mike prefers taking his Bearhawk Patrol on fishing trips. Alternatively, he has the Bearhawk 4-Place, similar to the (green) one his fishing buddy brought in on this trip. Also, Mike is close to finishing up the build of a Bearhawk LSA, a slightly smaller version of the Patrol that will satisfy Canadian Advanced Ultra-light Aeroplane (AULA) requirements.

Bearhawk vs. Cessna vs. Piper

While Mike concedes the Cessna 185 is the gold standard for utility and flying into remote locations, the one used on this trip can get into trouble due to its wheel penetration skis. With the wheels and skis both contacting the ice, one must, per Mike, “Pull it up for cooldown every five minutes and inch it forward. If you leave it set, the snow and ice will melt and then refreeze and stick.” Icy water builds up in the gap between the wheel and ski, making the bond especially strong.

Comparing landing performance to the C-185, Mike says, “The 4-Place Bearhawk gets in in half distance. Quite simply, it excels at slow-speed performance.” The Bearhawk has large cargo doors, by design, for ease of loading bulky and heavy cargo. “This also makes it great for setting up a tarp/tent structure off both the cargo doors.” With such a shelter set up, Mike says he’s able cook on the floor of its cabin.

Compared to the other gold standard, the Piper Super Cub, Mike adds, “The Bearhawk Patrol on skis is a 140-mph aircraft. A Super Cub, on the other hand, is not even close to that speed.” Its swiftness advantage is not lost at the low end. The Patrol lands at 35 mph, also outperforming the typical Cub.

Avoiding the sticky ice issue, the Bearhawks Patrol and 4-Place had straight skis. However, one might add that flying with straight skis limits the number of landing options en route. Fortunately for Mike, there’s La Ronge (Barber Field) Airport off Lac La Ronge in the center of Saskatchewan territory. The airport has a ski strip, so landing and refueling there is possible if needed. But for Mike, another plus of the Bearhawk is that it can hold enough fuel for a round trip to the cabin. During his summer trips, Mike stockpiles avgas at the cabin to be more self-sufficient.

Getting In—and Getting Out

Canada has its share of “portage” lakes—those only accessible by canoe. While one waterway may offer better fishing, getting to it requires carrying the canoe across land. This is particularly relevant for fly-in visitors. Skiplane and floatplane operations require space for takeoff and landing. There’s not really a STOL option here.

“What’s more, you can’t just drop in and land or leave the mains down.” Mike explained, “You must fly over the snow covered ice, creating a long set of tracks where you intend to land and fish.” This will cause flood ice, by “heaving” on top. And it keeps happening in layers. As you wait for the track to refreeze, you then come back and do it again along the side, “because you never land in exactly the same place,” Mike added. You do this in three or four sets to pack down your landing track.

To get out, he explained, “You must make 360° turns to pack the whole area down. While the lake is frozen under 3 feet of ice, the flood ice still comes in. Again, it’s all about the layers.”

Mike assures that it’s generally not unsafe. There’s no threat of falling through, but getting stuck requires a lot of work. To lift the plane and repack the snow beneath it requires leverage and ingenuity when isolated, and your only resources may be a tree and a rope.

Just Another Trip to Paradise

The three-day weekend fishing trip was nothing out of the ordinary for Mike. For the non-winterized type, it’s an exceptional way to enjoy flying. Mike usually makes plans to go when the temps are warmer than -4° F (-20° C). To buffer from unexpected weather, pilots are always aware that there’s no rush to get back.

While attending to domestic things like cooking, cleaning, resting and hot tubbing, the planes remain on the lake the entire time. “The house is on an island about eight miles long,” Mike explained. “There are others around on 3-acre islands.” In this setting, remote takes on a whole new meaning, and that’s the winding down component.

“The world is a small place when you have a plane,” said Mike. He lives near Regina, 200 miles north of the U.S. border. Tazin Lake is in the far northwest of Saskatchewan, 7 miles from Canada’s Northwest Territories. The two regions are divided by the 60th parallel, a line half as long as the equator. In his Bearhawk, Mike can fly up to the lake and back in one day.

Neighboring Tazin Lake is Lake Athabasca. On its southern shores is Athabasca Sand Dune, one of largest in the world. “You can land there, and there’s no house for 300 miles. There are hardly any trees. You get a sense that no one has ever set foot there before,” said Mike.

The Bearhawk is so well suited for this type of flying, Mike Silvernagle and Bearhawk Aircraft Canada seem to have found that mystical, harmonious place literarily known as Shangri-la. Perhaps it does exist in Saskatchewan, unencumbered by natural borders, a permanently happy isolated land. For Mike, getting to unwind is being gently guided to earthly places in the well-equipped Bearhawk skiplane he deftly conceived and constructed.

Mike Taylor is a veteran design engineer, mechanic, builder and marketing consultant who writes occasionally about extraordinary planes. Mike has spent 30+ years visiting aircraft facilities around the world exploring the fascination of flight.

This article originally appeared in the July 2021 issue of KITPLANES magazine.