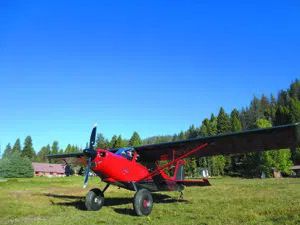 Buying Backcountry: Focus On Your Needs

Rick, American Champion designed the airfoil tail, 11% larger, out of necessity when the “Scout-Water Bomber” was developed in 2010. The bomber version carried 1,000 pounds of water in the back seat area. Equivalent to 5.9 FAA standard folks in the back seat! Let that sink in! The flat tail was flown first on the bomber, but didn’t fly all that well with 5.9 FAA equiv.’s in the back seat. The new tail was designed to carry that weight. Amazing when you think about it (it could be used on the southern border today). The new tail flew first on the 180HP, not the Denali. When the Denali was later designed the big tail was standard. The big tail was an option for the 180HP Scouts. All of the standard Scouts that I built had the big tail after the tail was introduced. The big tail is available as a retrofit to replace any flat-tail-Scout out there. I recommend it. Nice to fly.

Both versions of the Scout carry 70 gallons of fuel. This is a big deal when filling stations are few and far between in the real back country. The Scout carries two more hours of fuel than, as an example, the Aviat Husky. Simply put this is 1 hour further into the bush, and one hour back.

The Scout was originally a beefed up Citabria designed to be a crop duster. Hence in utility category it is a 2700 pound aircraft (for takeoff) vs a standard 2200 pound bird. And this was the flat tail version! There are still a few Scouts flying duster missions today.

I sold and or delivered the first fifteen IO-390 powered Denali Scouts built. This is truly a delightful airplane to fly into the backcountry…..and yes VG’s help with aileron control at the slow speeds.

About big tires…please allow me to use your words (regarding a totally different subject) to describe how I feel about “big tars”….”they are nothing more than what comes out of the south end of a northbound horse!” I’ll explain. They add weight, lots of weight and forward of the CG (more drag and increased stall speed). They add drag when landing and this can be good if you didn’t need to takeoff. Yup they add drag on takeoff and once airborne slow acceleration because of weight and aerodynamic drag. “Would someone please pull up the anchor”… “Big Tars” add side-load to tubular landing gear and weaken said landing gear with EVERY landing. A bit ago I was at one of the major factories out west to inspect a wrecked aircraft. There were five wrecks there including the one I was hired to inspect. All 5 had collapsed landing gear and all 5 had “fatties” (Big Tars) including the one I was looking at. Fat tires are special-use tires and should be put on for that once-in-a-while flight that you might find you landing on boulders. Otherwise 8.50 x 6 tires work very well for all fields that I know of. If you prefer a softer landing let some air out of your 8.50’s. One more issue…..I have yet to see a an approved performance chart for the fat tires.

Thank you for another fine article.

Yesterday was a banner day to illustrate See and Be Seen…and it’s limitations. In the first instance I was approaching an airport from the east to land on 36, while another aircraft of same speed was approaching the same distance on final to the south, and did not have ADSB-Out. We were both talking to FSS, and I just couldn’t find them…so I deliberately turned left to make darn sure there would be no conflict and called #2. I didn’t see them until they crossed the threshold. The second event, heading home in a friend’s Comanche, we were on a long path to straight in downwind left, they were in a 172, again with no ADSB-Out, and about 4 miles ahead of us. Two of us, talking to them for location and using our best eyeball skills, couldn’t find them until they turned base – we had of course slowed down a bunch to make darn sure we wouldn’t over-run them, particularly because everyone has a different definition of the size of a circuit and how to describe where you are.

The reinforced lesson: assuming someone can/will see you to provide collision avoidance is very very very foolish. Do what you need to do to make very absolutely sure there’s no way you can hit them. Turning base when there’s an aircraft on long final that you can’t see…sorry, doesn’t matter who’s ‘right’, that’s just asking for disaster.

Actually, humans are poor performers at see-and-avoid tasks. I can’t tell you how many times ATC has called out traffic – traffic at your 10 o’clock, traffic at your 11 o’clock, traffic at your 12 o’clock, traffic at your 1 o’clock, traffic no longer a factor – and I’ve never seen it. Back when we were first looking at “sense and avoid” now “detect and avoid” for unmanned systems, the official position was just make the machine do it as well as a human. I was like, ok, that’s easy because humans really suck at it. Then they realized what they were saying, and numbers like 1×10^(-6) (1 in a million) or even better were being thrown around, which is much better performance than a human. I’m not saying give up on “see and avoid”, especially in uncontrolled congested areas, but the tools they are saying pilots’ eyes are glued to are giving better information generally IMHO. What’s probably missing is some sort of aural or visual alert like TCAS to help the pilot understand there is a situation evolving so they don’t have their heads buried all the time. I avoided being drilled by an Airbus descending into me (C172) from behind not because pilots saw me but because their TCAS went off. I heard it going off when they called ATC and shortly later saw them flying right by off my right wing.

Poll: Have You Ever Landed, Taken Off Or Lined Up On The Wrong Runway?