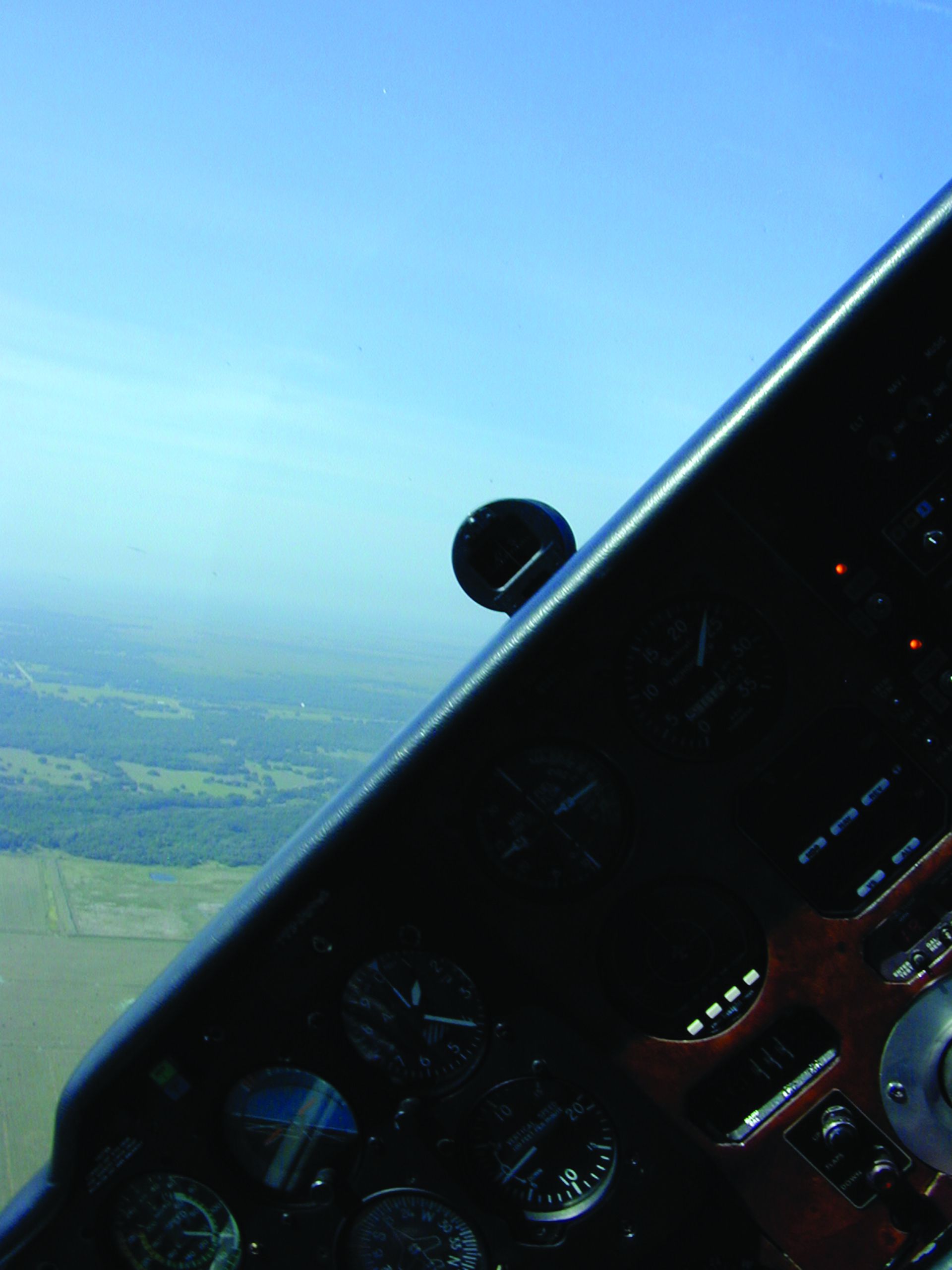 Most of us spend our time aloft droning along in straight-and-level flight. For the typical pilot, turns are reserved for the traffic pattern or flying an approach, and occasionally for entering a holding pattern or performing a course reversal. And we rarely exceed 30 degrees of bank. On one hand, that’s okay, since our relative lack of experience with turns—at least when compared with the time we spend straight and level—means we probably don’t perform them well, with altitude excursions, poor rudder technique and failure to roll out on the desired heading among common mistakes.

On the other hand, practicing turns can teach us a lot about how and why the airplane flies as it does, and how well or poorly we both anticipate what it wants to do and manage its tendencies. Steep turns, in fact, are a great way to refresh some basic skills. They’re a required task for a private certificate and, if we want to maintain our skills to at least those of a private pilot, we should be able to nail them. But before you head out to practice them, let’s talk a bit about what’s going on in steep turns, including the aerodynamics and how the airplane’s design can work against us, with an idea to at least sharpen up our skills with the more mundane, 30-degree-orless banked turns.

The FAA’s Airplane Flying Handbook (FAAH-8083-3B) defines a steep turn as one or more 360-degree-to-720-degree turns, in either or both directions, using a bank angle between 45 degrees to 60 degrees. Use the diagram below to get the picture of how the maneuver should look.

Sounds (and looks) simple, right? And they are, with a little practice. But there’s actually a lot going on here, which is why steep turns are great way to test and improve your skills. By way of explanation, the diagrams below explore two important mileposts toward understanding why steep turns require some practice.

Figure 1, below, depicts a medium-banked airplane and the relationship between the horizontal and vertical lift components in a graphic you’ve probably seen a version of before. For our purposes, the biggest takeaway from this graphic is that, in a banked turn, the vertical lift component we’ve been relying on in straight and level flight is joined by a horizontal component. It’s this horizontal lift component that actually turns the airplane, while the vertical component works to keep it aloft. The airplane’s weight remains the same but centrifugal force also is present. The airplane’s weight and the imposed centrifugal force combine to impose a greater load on the airplane. How much more load?

That question is addressed in Figure 2, which you’ve probably seen before and which also graphs how load factor increases with bank, presuming a constant-altitude turn. One of the takeaways here is that load factor, the dark blue curve measured in multiples of the gravity force, G, always increases when there’s a horizontal lift component. In a 60-degree-banked turn, the total load factor approaches 2G, or twice the force of gravity.

That’s the force pushing you down in your seat when the bank angle is steep enough in a level turn. Without appropriate input on the pitch control, the airplane will not maintain altitude, one of the factors determining the quality of a steep turn demonstration.

The punchline is that performing steep turns also requires some degree of airspeed control. With the airplane’s weight-adjusted maneuvering speed as the maximum speed in a steep turn, and its flaps-up stalling speed (VS1) as the minimum speed, you’re operating in a narrower range of speeds than you may be accustomed. This has implications when flying in turbulent air but, typically, as long as the maneuver is begun at the manufacturer’s recommended entry speed, the steep turn is coordinated and speed is not allowed to decay, this isn’t a concern.

It can become a concern, however. If the steep turn is mishandled—by significant overbanking, for example—to the point the slower-moving inside wing stalls, an accelerated stall may be in your future. In extreme situations, when airspeed is allowed to decay and the turn is not coordinated, an accelerated stall can lead to a spin entry. Neither will endear you to your passenger, your instructor or your pilot examiner on a checkride.

Throughout a steep turn, it is expected the airplane will be in coordinated flight. This typically is measured by the inclinometer’s ball in the turn-and-bank indicator/turn coordinator. But the aerodynamics of a steep turn can be a factor. For example, at a 45-degree bank angle, the elevator/stabilator of an airplane with a conventional tail (i.e., one with its stabilator/ horizontal stabilizer mounted perpendicular to the vertical stabilizer/rudder assembly) can begin to act as a rudder, and vice versa (airplanes with a V-tail present a whole ‘nuther situation).

Additionally, when flying a single-engine airplane, the left-turning tendency comes into play. This behavior results from the engine’s torque, the spiraling slipstream, P-factor and gyroscopic precession, and depends on the direction in which the engine turns the propeller. The propellers of airplanes manufactured in the U.S. typically turn in a clockwise direction when viewed from the cabin, which results in the tendency to be to the left. The props on airplanes manufactured in other countries may turn counterclockwise, which will translate into a right-turning tendency. We’ll presume you’re flying a single made in the U.S.

The left-turning tendency is the same reason you need right rudder on that made-in-the-U.S. single on takeoff and in high-power/low-airspeed situations. This means the airplane will tend to want to turn left and you will need less rudder input to coordinate a steep turn in that direction. It also means you’ll need more rudder to maintain a coordinated steep turn to the right. This has implications when rolling out of a steep turn in one direction and immediately rolling into one to the opposite direction.

The overbanking tendency (see the sidebar below) means that in steep turns, you may need to apply aileron opposite the turn to prevent exceeding the maximum bank angle for the maneuver. When executing a steep turn to the left, overbanking and the left-turning tendency likely will require even more opposite aileron.

There are a number of ways to gauge the quality of your steep turns. Perhaps most obvious is to complete the turn(s) at the same altitude you entered. Excursions are allowed—see the appropriate practical test standard/airman certification standard to determine how much slack there is. Another measure of the maneuver’s quality is how steadily the desired bank angle is maintained. Again, refer to the appropriate PTS/ACS for allowed tolerances.

Keep in mind those tolerances are there to help you perform the maneuver and that at steep bank angles, shallowing the bank a few degrees may help arrest a descent while you apply greater back pressure, and steepening the bank a bit may help with a slight climb.

However, the gold standard for determining the steep turn’s quality is whether you feel the airplane fly through its own wake turbulence. This means you’ve managed to maintain the desired altitude and flown a more-or-less perfect circle. Encounter the wake four times during a 720-degree turn in one direction and then the other, and you’re ready for the checkride. Or to impress your friends.

And don’t forget your clearing turns.

A typical steep turn demonstration will look like the diagram at right, with two turns in opposite directions. Factors used to judge its quality include:

When we bank an airplane and allow it to turn—as opposed to performing a slip—one wing creates more lift than the other. That’s the wing outside the turn. If we’re turning left, as depicted in the diagram at right, the right wing generates more lift. Why? Because it’s moving faster through the air than the inside, left wing. Both wings are bolted to the fuselage—how is that possible? Precisely because both wings are bolted to the fuselage, the outside wing has to move faster than the inside one.

Look again at the diagram at right. The dashed red lines detail the paths each wing takes in the turn. The outside/right wing—in this example—has greater distance to travel in the same amount of time, so it has to move through the air faster, however slightly.

Since the outside wing is moving faster, it generates more lift than the inside one. A result of generating more lift is that the outside wing wants to rise, increasing the bank angle. The effect is more pronounced the greater the difference in the wings’ speed—bank angle, in other words. When performing steep turns, the overbanking tendency is at its greatest.

Some texts, including the FAA’s Airplane Flying Handbook, suggest adding power and/or nose-up pitch trim is appropriate when performing steep turns. That may be true when flying an underpowered airplane at its maximum gross weight. However, we caution against adding power or nose-up trim during the maneuver for a couple of reasons.

Any configuration change you make during a steep turn has to be undone when returning to straight-and-level flight. That translates to greater workload and a possible altitude bust. For another, a steep-turn demonstration may consist of a 720-degree turn in one direction followed immediately by one in the opposite direction. When rolling through wings level to transition to the opposite direction, added power and/or nose-up trim also can result in exceeding the chosen altitude.

In our view, it’s better to use a power setting resulting in a level cruise airspeed at or below the recommended entry/maneuvering speed and leave the power alone throughout the demonstration. Less can go wrong; adding too much power, for example, or forgetting to remove it while returning to level flight. Adding nose-up pitch trim during the maneuver begs for a similar outcome.

We prefer to use the pitch control instead of trim to provide the additional nose-up input needed during the maneuver, which allows finer control and minimizes the need to relax back pressure, and then increase it again when transitioning from one direction to the other. If the resulting control forces are too heavy, however, apply a predetermined amount of nose-up trim before entering the maneuver and understand you’ll need nose-down input on the pitch control before and afterward.

This article originally appeared in the September 2020 issue of Aviation Safety magazine.