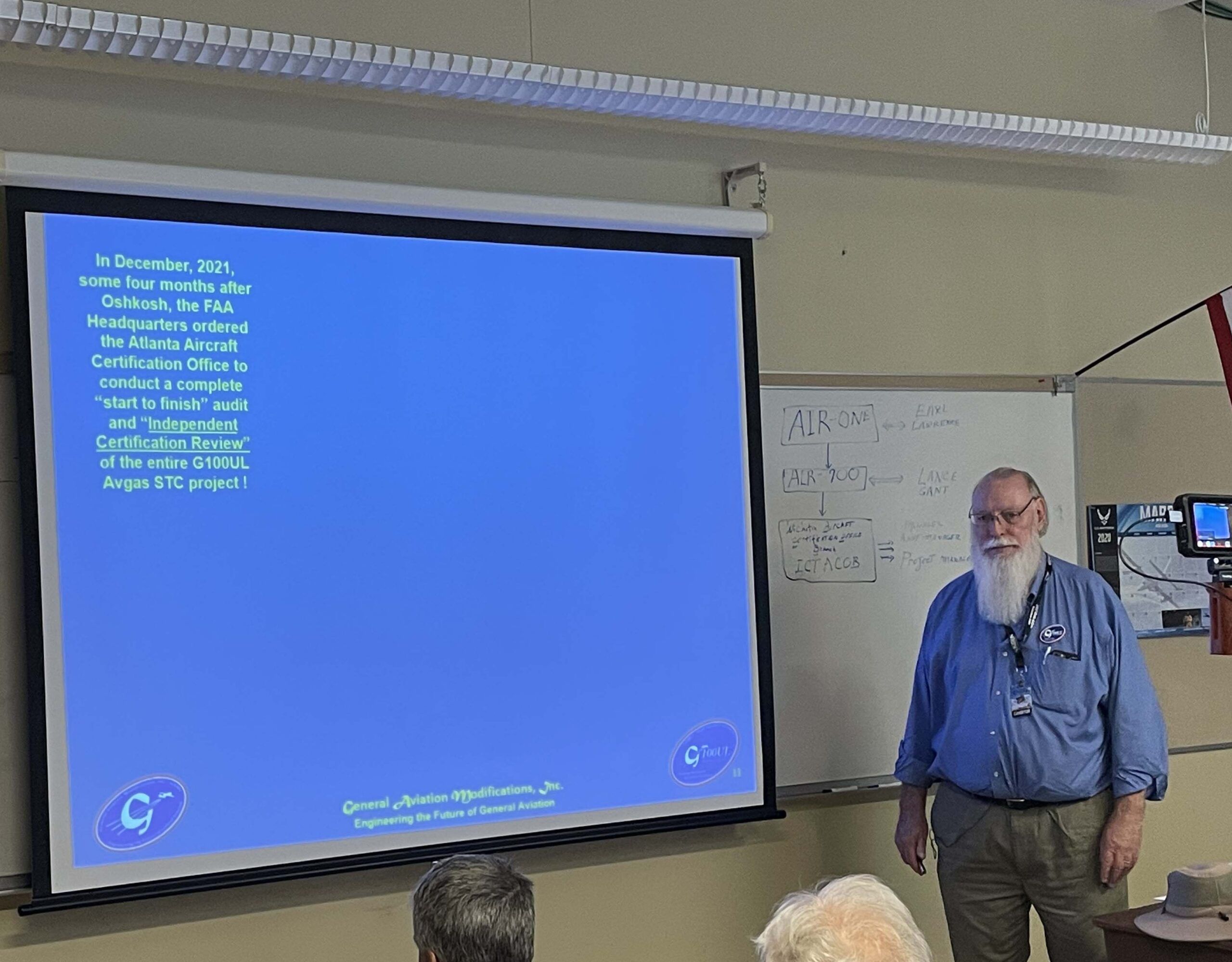 Since most don’t live to tell about it, I never thought much about how your life is supposed to flash before your eyes in a brief moment of clarity before darkness descends and, as the Globe Life talking head says, your final expenses come due. But I sure as hell never thought it would happen to me in a small, airless classroom at Sun ‘n Fun. And yet, there it was.

In an exquisite master class in the absurdity of FAA oversight Tuesday, George Braly of General Aviation Modifications Inc. ran down in dreary detail how the agency has dragged its feet, obfuscated, delayed, ignored, changed the rules and simply abandoned its charge to oversee the certification of GAMI’s G100UL unleaded avgas. On some of his slides detailing this 12-year odyssey—yes, 12 years—were emails with my name on them. I started covering this story in 2010—January, as Braly reminded us at the forum, whose venue, appropriately, required a treasure map and numerous detours for directions to even find.

You had to have lived this to appreciate the number of stops, starts and restarts this project went through and for the life of me, I don’t know why GAMI didn’t give it up but if I think about it at all, I know it’s because Braly is more stubborn and determined than the FAA is intransigent. Meanwhile, the rest of the industry did its share to whisper-campaign G100UL to death and, oddly, do all it could to keep lead fully invested in avgas so one day we would truly have a crisis when the EPA yanked the regulatory rug. Gotta give GA credit, it’s pretty good at circular firing squads.

To scrub the playhead forward, last summer at Oshkosh, to great fanfare, the STC approving G100UL was announced. It applied to a limited number of engines and GAMI was tasked with additional testing and data work to expand the engine list. This it did. The Wichita Aircraft Certification Office duly sent a letter to FAA HQ reporting that GAMI met all the test requirements—best-run program they had ever seen, or words to that effect—and was entitled to an STC-AML with every single spark ignition engine in the FAA database approved to use G100UL.

Eureka. We’ve reached the sun-dappled highlands of a lead-free future.

But not yet. The document rests on the desk of the executive director of the Aircraft Certification Service otherwise known as AIR-1. It’s awaiting the signature of AIR-1, who is Earl Lawrence. No date certain has been given, but in yet another last-minute delay, the FAA is now subjecting the STC to a Technical Advisory Board, a bureaucratic fence line that sprang out of the 737 MAX fiasco. The legislation that enabled TABs specifically applies to transport aircraft weighing 150,000 pounds or more, Braly says, and it hasn’t been explained how it can be applied to light aircraft. Caution is understandable here, but this fuel has been under continuous testing and review for more than a decade. Its performance is detailed a tsunami of test data.

To keep you from opening a vein, I have blurred the chronology a little. While the Wichita office was dotting t’s and crossing i’s on the G100UL STC, the FAA in March announced yet another program to—wait for it—find and certify an unleaded avgas. This time, the acronym was EAGLE, for Eliminate Aviation Gasoline Lead Emissions. And let’s call it what it is: It’s son of PAFI, the first FAA oversight effort that started in 2013 and by 2019 had failed to deliver anything. Zip. Braly said the cost of that was $80 million, but I was never able to determine a number because the entire program operated as a black box. Everything was proprietary because private companies were involved.

At a press conference, Lawrence said he thought PAFI had been “a great success.” I simply cannot agree. I don’t know how anyone in the industry could think this. PAFI was supposed to yield an unleaded drop-in replacement for 100LL. It did not. It was an abject failure and now, even though the FAA has an STC in hand awaiting approval for a fuel that has been proven, ad nauseum, to work in all engines, it wants more money for more testing. While the PAFI program—that was Piston Aviation Fuels Initiative—supposedly produced data, accessing it is all but impossible.

I really wonder what’s going to happen if either the GAO or a congressional investigatory committee examines this. And it should be examined because it has the strong whiff of a government agency seeking more money for yet another program. It should first be asked and answered why the solution already in hand is not sufficient.

The real EAGLE eye-opener is the timeline. The goal is “lead-free” by the end of 2030. That’s eight years from now. Add that to the 12 GAMI has already invested and it’s 20 years. But wait, there’s more. Even ahead of the final phaseout of leaded auto fuels in 1996, work had been ongoing to find an unleaded avgas replacement. So add another 20 years and by 2030, we’ve been dawdling on this for nearly 50 years. Some perspective: In 1957, the U.S. hadn’t even launched a satellite. Twelve years later, Neil Armstrong walked on the moon. So unleaded avgas is a harder problem than a lunar landing? Perhaps you can enlighten me in the comments section.

From stumbling through this for 12 years with GAMI and another decade before that, I see multiple dynamics here. One is that aircraft owners are split on whether they should care about lead emissions from their airplanes. A poll we ran two months ago revealed that 36 percent of pilots thought lead just isn’t an important issue and/or there’s nothing wrong with it in fuel. A bit fewer—32 percent—thought leaded fuel should have been phased out years ago. Another poll last year revealed that only 20 percent think a more expensive unleaded fuel is worth the cost. (G100UL is expected to cost 50 to 85 cents more per gallon than 100LL.)

Second, in establishing a 2030 deadline, the FAA and the industry groups that signed on to EAGLE might as well issue a press release and say we don’t think lead is a problem, but this new program gives us a fig leaf for another eight years. Meanwhile, it risks tanking GAMI and Avfuel efforts to slowly build a market for G100UL. And as Avfuel’s Craig Sincock said in this interview at AirVenture last year, doing this will take time. EAGLE could be a sniper shot to kill that progress, thus building in failure against a fuel that’s already proven against one that might eventually appear. Or not. Frankly, it’s lunacy.

It’s not clear from the outside looking in how much influence the majors—Phillips, Exxon, Shell, BP—have on the politics and process here. Paul Millner told me he thinks they make about $150 million [corrected from $50 million] a year in gross profit on avgas which doesn’t seem like much, but is when you understand how marginal the refinery business is. They thus have a vested interest in the leaded status quo and no incentive to produce G100UL under license, even though I suspect these discussions are going on.

Last, the STC. Despite this process being fully elucidated in the federal code, the FAA continually resisted and sabotaged efforts to approve a fuel under STC. It got so bad that a previous AIR-1, Dorenda Baker, had to personally intervene twice to quash lower-level malicious actors. Such is the nature of the government beast.

And yet it goes on today, with higher level block and delay for reasons not necessarily visible. But the fact is, GAMI is entitled by law to its STC-AML. It should be issued without further delay and then let the market decide whether the fuel is viable. If others have a competitor—as Swift Fuel says it does—let them pursue a similar path.

As for EAGLE, we’ve treated it objectively with straight news. But you’re reading an opinion piece and my opinion is it’s just another giant boondoggle like PAFI, but with a longer lifespan. Unfortunately, it could do real damage to a fuel that has been proven to work.

ADDITION: I neglected to include a reminder that pressuring the FAA via direct letter is an option here. The address is: Billy Nolen, Acting Administrator, Federal Aviation Administration, 800 Independence Avenue, SW, Washington, DC 20591 . And while we’re at it, I’d like to see AOPA, EAA, GAMA and NBAA step up with higher profile insistence that this STC get approved right away. If I can do it, they can do it.