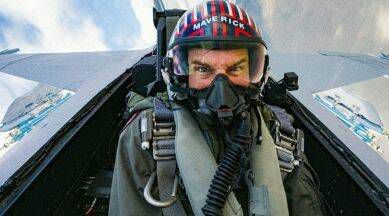 First, a nod of thanks to John Lehman Jr. Without him, this thing would never have gotten started. Lehman was Secretary of the Navy in 1984 when Jerry Bruckheimer approached him about doing a movie on the Navy Fighter Weapons School. Lehman saw it as a recruiting bonanza—he was right—and his greenlight begat “Top Gun,” which led straight to last weekend’s release of the sequel, “Top Gun Maverick,” albeit three decades in the oven.

Anyone who was perched on the edge of anticipation waiting for this release won’t be disappointed, I’m sure. I wasn’t among the bated breath crowd, but “Top Gun Maverick” is probably the best of its kind for a flight-based shoot-‘em-up movie. The original 1986 release had a paltry $15 million budget ($40 million in 2022) while the sequel burned through four times that amount. And does it ever show in stunning cinematography, seamless special effects, crazy good flying scenes and, maybe not that it matters that much for this kind of film, impressive acting against a storyline that’s—let’s face it—about as deep as a Marvel comic.

About the fifth time I saw the original, I finally accepted that this is how you have to view movies like this that take such ridiculous license with reality as to stretch believability to its elastic limits. “Top Gun Maverick” does this here and there, but overall it hews more to realistic events than the original did. And where it departs, it does sufficient penance with jaw-dropping flight scenes to make up for it. I’m pretty sure, for example, early in the movie they filmed a real vertical rolling scissors from the outside. Pretty sure I saw that twice and it’s an eye-popper.

Tom Cruise, who reprises the lead character, Pete “Maverick” Mitchell, was a top line executive producer apparently with a lot of influence. After the original, he learned to fly and is now type rated in at least a couple of jets and owns a two-seat P-51. The sequel hews to the original in basic structure so, predictably, there are a few must-have touchpoints from 1986, updated to modern sensibilities. Whether it was Cruise or the writers, they managed to de-cringe the new version. No hokey hangar scene with the cowboy hat and locker room beefcake, either. The real Top Gun pilots hated that and had other script issues throughout production, according to Admiral Pete Pettigrew, who served as technical advisor on the first film. For fans of ancient motorcycles, Cruise rides into work on the original Kawasaki GPZ900, but later upgrades to a Ninja H2.

Also retained was, wait for it, the volleyball scene, but in deference to there being a woman pilot in the group, no over-the-top homoerotic flexing, but a clean game of touch football on the beach. Team building, you know. The original version didn’t take itself entirely seriously; the sequel even less so. There are enough humorous bits, some at Cruise’s expense, to suggest the script writers and rewriters had fun. Poking at the fetish for callsigns, one of the F-18 RIOs—I guess they’re WSOs now—is asked his callsign. “It’s Bob,” he says. “Just Bob.” It’s even stenciled on his helmet. In the set-up to Maverick’s return to Top Gun, he’s testing a new Mach 10 aircraft which disintegrates when he pushes beyond 10.1, ejecting him somewhere over California. (I know … just go with it.) Channeling Sam Shepard’s Chuck Yeager in “The Right Stuff” after he ejected from the NF-104, Maverick stumbles into a diner, dazed, face blackened and charred helmet in hand.

“Where am I,” he asks a wide-eyed kid at the counter. There’s a long pause. You know what’s coming. And the director knows you know, too. That doesn’t make it any less funny. “Earth,” the kid says.

Following the original, the film opens with a carrier scene reprising Tony Scott’s moody, artistic shots of the flight deck at work. It’s a hard act to follow and I’m not sure “Top Gun Maverick” director Joseph Kosinski got it so much better as different. His cuts were shorter and he got breathtaking hi-def detail of an arresting cable snaking back into battery and the cat shuttle taking up the slack for a shot. I longed for more of that. Scott’s work was obsessive about the golden light of late afternoon and is more, well, painterly, I guess. Before his death in 2012, Scott himself told the story of the carrier captain changing course during his shooting. (It was the Enterprise.) When he demanded a down sun heading, the officers reminded him what it cost to run a carrier. Scott produced a checkbook and sent a $25,000 check to the bridge. He didn’t say if it was cashed.

For “TG Maverick,” the basic plot line here ain’t War and Peace. Maverick’s called back to Top Gun to train pilots to bomb a nuclear site in some unnamed country. Wherever it is, it has snow and pine trees. And a lot of SAMs. They have to fly an impossibly low profile, dive into a mountain crater then do a 9G pull-up to escape. Glossed over is why F35s can’t do this or just a few Tomahawks but … comic book mode.

For much of the flying, Cruise is in the back of an F-18, including a carrier launch. A Navy pilot is in the front seat doing the flying, but the camera work disguises this. Bloomberg reported the production paid $11,000 an hour for the aircraft and the Navy specified that only the Naval pilots would be hands on. (Bet that got fudged.) The other principal actors were similarly situated although some of this flying may have been CGI, which has gotten so good it’s hard to tell what’s real and what isn’t. For example, for the grand escape denouement, Cruise is flying a stolen F-14—just go with it—of which there are no accessible airworthy examples. So it’s done with a cockpit mockup and CGI. When you see that scene, with the cotton candy blooming off the wings, remind yourself to compare it to the scenes that are real. All of the actors went through a three-month flight training course that included F-18 rides.

The script gets some traction with one of the characters, Bradley “Rooster” Bradshaw played by Miles Teller. He’s cast as the son of Goose Bradshaw (Anthony Edwards), who died in an ejection accident in the original film. This sets up a natural if predictable tension that just as naturally dissolves in bro hugs on the flight deck after the bad guys are dispensed with. In body language and mannerisms, Teller nails the very son he is supposed to be. Superb acting.

And now, give Cruise his due. To be honest, I am not a fan for reasons there’s no need to mention here. But as an actor, Cruise has become far more seasoned than he was in 1986. Maverick is, after all, a cardboard cutout of a character. But Cruise, nonetheless, gives Maverick a depth not necessarily obvious from the intent of the script which is, of course, the essence of acting. He does much of this with facial expressions and gestures and manages to convey the sense of a once-brash man whose sharp edges have been sanded off by the consequences of his ego-driven excesses. This is a very subtle thing, but it is also unmistakable.

No more so in what I thought was the gutsiest turn in the script. Of the original cast, only one actor—Val Kilmer—appears in the sequel, as Admiral Tom Kazansky. As Iceman in the original, he had been Maverick’s nemesis but, as alluded in the sequel script, he became his loyal friend and wingman. While Maverick’s rank stalled at Captain (O-6), Kazansky became an admiral and commander of the Pacific fleet. It’s made clear that Kazansky became Maverick’s Navy guardian angel.

In real life, Kilmer lost his voice to throat cancer. Fortune reported that Kilmer would employ an AI-synthesis of his own voice for the film, but in fact he communicated through a keyboard. The face-to-face meeting between the two is a short scene, but I found it emotionally powerful. It seems apparent that the two actors have a genuine affection for each other or are just good enough to make the audience believe they do. For the purposes of the story arc, what’s the difference? They didn’t need to include that scene, but that they did was a wonderful, uplifting surprise. It was reported that Cruise insisted on it.

When the first film debuted, MTV was five years old and still a thing. Resonating with the culture at the time, “Top Gun” had a music video quality to it. Watched today, it’s actually a little cloying. The sickly, bassy guitar in “Take My Breath Away” still reels me back to 1980s big hair that hasn’t improved with age. Right in tune with the current culture, “TG Maverick” has music, but it’s agreeably toned back. You know it’s there, but it’s not pounding. “Danger Zone,” the worst ear worm in the history of music, is woven briefly into the opening. Lady Gaga has a nice ballad at the end, played against Cruise flying his Mustang. Hey, if you got it, flaunt it. Also, be prepared for a loud movie. The jet noise sounds like it’s boosted through most of the scenes. The seats in our theater vibrated.

Thanks to the COVID pandemic, “Top Gun Maverick” was delayed in release for two years because Paramount wanted it to be seen on big screens. Wise move. I saw it on an IMAX screen and would watch it again if I have time. For all its groaning flaws, the original “Top Gun” has become a classic. But it’s not even in the top 200 of high-earning films, even though it was highly profitable. “TG Maverick” may just outdo the original. But even if it doesn’t, it will go into the aviation movie Hall of Fame.

Researching Lehman’s role in making “Top Gun” happen, I found what a New York Times article once said about him interesting. Lehman had once been an A-6 B/N known for his rowdy ways. His boss, the SecDef, said the Times, “appears to regard his 43-year-old Navy Secretary as a prodigy with delinquent tendencies.” Makes me wonder if Lehman saw himself in the character of Maverick Mitchell.