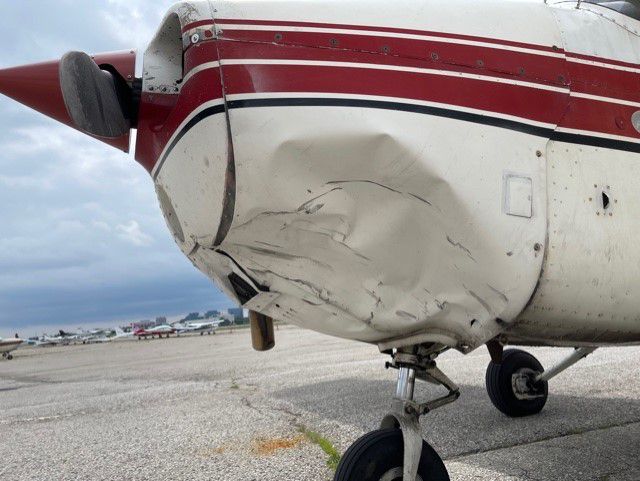 All the Canadian authorities are looking into the midair collision of a flight school Cessna 172 and fair-sized drone that could have ended a lot worse than it did. The fact that it happened within a mile of an airport and that the drone operator was a local police department has added some extra attention to the mishap. The Canadian Flyers 172 was substantially damaged in the collision, with major sheet metal damage and an engine teardown mandated because the lower arc of the prop went through the drone. Had it been a few feet higher, the story may have been a lot different but the instructor on board, who assumed the 172 had hit a bird, made a routine landing at Buttonville Airport.

The instructor and a student had just turned final for Buttonville, which is in the northern part of Toronto, and were set up for landing when they felt a substantial jolt that moved them in their seats. They were about 500 AGL and a mile from the threshold. The landing was normal. “When exiting the aircraft, they were shocked to see a major dent on the left underside of the engine cowling. The airbox was also bent,” said a report from Transport Canada’s Civil Aviation Daily Occurrence Reporting System (CADORS). “A few hours later, a police detective confirmed a York Regional Police drone had struck their aircraft.” The incident occurred Aug. 10 but didn’t show up in the CADORS until Aug. 18.

The CADORS report classifies the accident as “unauthorized entry” to controlled airspace. It also noted that Nav Canada, the air traffic control provider, was not aware of drone activity in the area. In Canada, drones are banned within 3 nautical miles of uncontrolled airports and restricted to 400 feet AGL without special authorization. To fly in the controlled airspace the drone and aircraft were in, Nav Canada has to approve it and the drone pilot must be in radio contact with controllers. The police department has not commented any further on the mishap except to say the drone was part of a police operation in the area. It hasn’t identified the type of drone involved but there was media coverage when the department acquired its first drone in 2016. That was an Aeryon Ranger which, with payload, weighs 10-12 pounds.