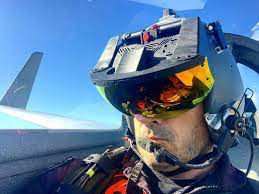 The Air Force is expected to roll out augmented reality helmets that will be able to pit fighter pilots against the latest and greatest threats from China and Russia next year. The helmets, developed as part of a $70 million contract by military technology company Red6, will have a visor on which battle scenarios featuring advanced adversaries will be projected. “Better, faster, cheaper,” Daniel Robinson, founder and chief executive of Red6, told The Washington Post. “This is the way we’ll train them in the future.”

Red6 board chairman Mike Holmes, a retired USAF general, told the Post the current training regimen pits fifth generation against adversary aircraft built in the 1950s in mock combats that don’t create a realistic battle scenario for the fights those pilots will face with the most modern Russian and Chinese hardware. It’s expensive, too, costing as much as $100,000 per flight hour. Holmes said his company’s system offers and inexpensive and effective training alternative that U.S. fighter pilots need. “To keep relevant,” he said, “we’re going to have to push up our training game over the next several years.”