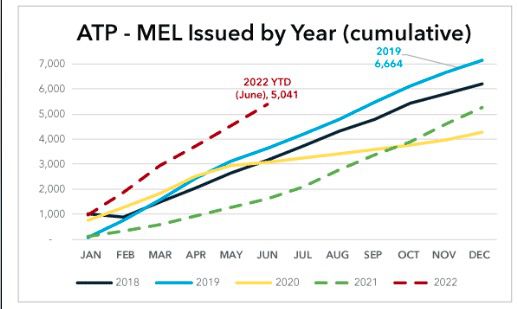 The Air Line Pilots Association is continuing its battle against the notion of a pilot shortage by publishing FAA data that shows new ATP certifications on the increase. The union, which has consistently maintained that airline mismanagement and not a shortage of fresh troops is behind the current travel chaos, released FAA data showing that new ATP certifications are on pace to almost double the production rates of the last three years. The media release is a direct challenge to Republic Airways’ request for an exemption from the 1500-hour experience minimum for ATPs to allow graduates of its training program to get in the right seat at 750 hours. It also goes after suggestions that the retirement age for airline pilots be increased.

According to the data compiled by ALPA from FAA information, in the first five months of this year (to June 5) a total of 5,041 new ATPs were issued, more than for the full years of 2021 and 2020. At this pace, the total for this year will be far ahead of the 6,664 produced in 2019. “So, although we don’t have a pilot shortage, we do have a shortage of airline executives willing to stand by their business decisions to cut air service and be upfront about their intentions to skirt safety rules and hire inexperienced workers for less pay,” the union said.

For its part, Republic Airways stressed that it’s not trying to change the current rules. “Republic is not proposing overturning the 1500 hour rule or weakening safety; to the contrary, we are proposing a more intensive, mission-specific training pathway similar to what is permitted for military pilots under current law,” Republic CEO Bryan Bedford told AVweb in an email statement. “Safety is and will always be the top priority for Republic Airways — it is our brand, our business — and with our state-of-the-art training academy we are proposing a pathway supported by data gathered over the course of four years to produce higher performing pilots while reducing significant economic barriers to enable more diversity in our cockpits.”