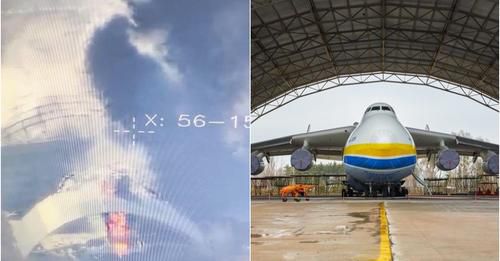 Ukraine’s Minister of Foreign Affairs Dmytro Kuleba confirmed on Feb. 27 the world’s largest cargo aircraft, the AN-225 Mriya, was destroyed during a Russian attack on Gostomel/Antonov Airport in northern Ukraine on Feb. 24. There was an earlier report that the plane was safe on the ground in Georgia but Kuleba’s statement appears to refute that. Also, the last flight of the aircraft, according to FlightAware, was on Feb.5 when it flew to Gostomel from Denmark. A fuzzy satellite photo circulating online purports to show the giant aircraft on fire in its hangar at Gostomel.

The aircraft appears to have been destroyed in a fire started by missiles exchanged between Russian and Ukrainian attack helicopters in a dogfight over the airport. The airport is home for the aircraft manufacturer and the base for the Mriya. The aircraft first flew in 1988 and was originally intended to carry the Russian Buran space shuttle. It became a cargo carrier and was in demand all over the world to carry heavy and bulky loads too large for other aircraft. Its destruction has become another rallying point for the Ukrainian resistance.  “Russia may have destroyed our ‘Mriya,’” Kuleba wrote in a tweet. “But they will never be able to destroy our dream of a strong, free and democratic European state. We shall prevail!” he added.