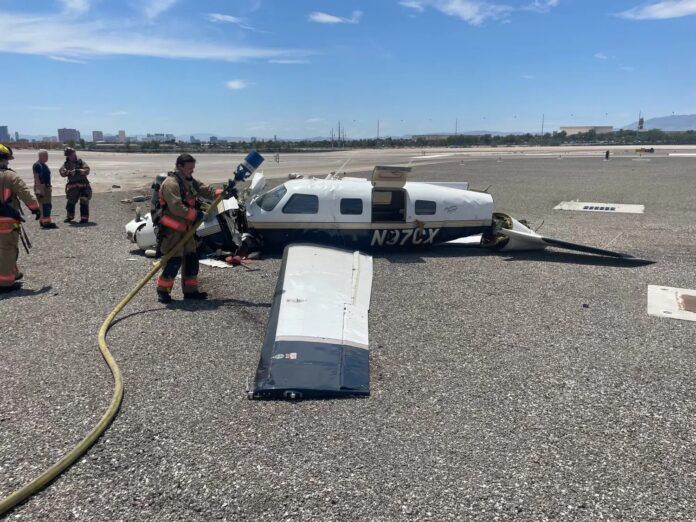 The FAA hosted a safety meeting at North Las Vegas Airport (KVGT) in Nevada on Monday (Sept. 19). The meeting was prompted by last July’s midair collision that claimed four lives. In that accident, a Piper Malibu arriving from the northeast apparently lined up on Runway 30R instead of Runway 30L as it had been cleared (and had acknowledged). It collided with a Cessna 172 on a training flight attempting to land on Runway 30R. At the meeting, as reported by local news television station Fox5 Vegas, local pilots and representatives of Clark County joined the FAA in addressing challenges with the configuration of the airport’s two parallel runways 12L/30R (5,001 by 75 feet) and 12R/30L (4,203 by 75 feet).

In addition to the offset approach and departure ends, the measurements of the parallel runways’ Runway Safety Areas (RSAs) are well tighter than what is now standard.

The FAA representative speaking at Monday’s meeting said, “The runway safety area at North Las Vegas is not typical or standard. The distances from the departure and approach ends of the runways is 600 feet and from the center line to the end of the RSA is 75 feet for North Las Vegas. Standard would be 1,000 feet off the departure end or approach end and then 250 feet off of each side of the center line.” In other words, not only do the offset approach and departure ends afford less buffer than usual and can be confusing to pilots, but the parallel runway centerlines are much closer to each other than current standards dictate (The airport first opened on Dec. 7, 1941—Pearl Harbor Day).

Among the safety recommendations proposed at the meeting were several avenues to further ensure that pilots were aware of and complied with the right and left traffic patterns for the two runways.

The Clark County representative also said the process of compiling a master plan for the North Las Vegas airport will launch in November, but it would be “years” for any physical changes to be completed. The county representative told Monday’s gathering, “We have had our challenges with [some of] the geometry of the airport. [It] is so old that some of it needs to be refreshed.”