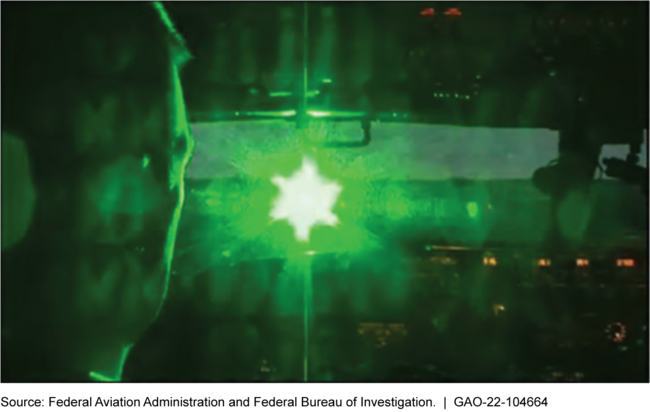 The General Accountability Office says the FAA, FBI and FDA need to get together to revive cooperation to stem the increasing scourge of laser attacks on aircraft. The three agencies disbanded their interagency working group five years ago and laser attacks have since spiked dramatically. The FDA is in there because for some reason it regulates lasers. The group disbanded in 2015 and between 2014 and 2021 laser strike reports almost tripled from 3894 to 9723.

One of the effects of the dissolution of the committee is that the FAA doesn’t have easy access to the records of the other two. In 2016, the FAA was ordered by Congress to report annually on laser strike issues, including investigations and prosecutions, but because it can’t get the data, its reports are inaccurate and incomplete. The GAO found 44 laser attack prosecutions from 2016 to 2020 but the FAA only knew about four of them. ”By not routinely seeking updates from agencies, FAA does not provide Congress with a complete picture of laser incident investigations and enforcement actions as required.”

The GAO also wants the FAA to lay out what information is most useful for investigators probing incidents and how to collect that information. The major tool now being used is a lengthy and voluntary questionnaire for pilots, but only 12 percent take the time to fill it out. “We recommend that FAA improve its efforts to collect and share information with law enforcement and reestablish the working group,” the GAO said.