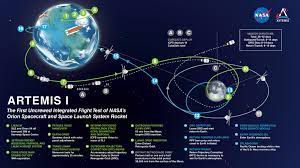 Mike Collins, the late Apollo astronaut, famously said one of his great regrets was not saying something more epic when, as CAPCOM, he cleared Apollo 8 to reignite its Saturn IV-B to commence its historic voyage to the Moon on Dec. 21, 1968. In the dry parlance of NASA, it was “go for TLI”—translunar injection. He thought it should have been something like, “you’re go to slip the surly bonds and venture where no man has before.”

If the flight plan works out, someone at NASA gets a do-over on Monday if the scheduled Artemis 1 mission launches on time. No humans aboard, just three instrumented mannequins, but someone gets to say go for TLI, a phrase last used in human space flight in December 1972 when Apollo 17 put the last crew on the lunar surface.

Lunar Voyaging V2.0 is quite a bit different than the Apollo effort. But it hardly lacks in boldness when you consider that the core booster of the Space Launch System that comprises Artemis 1 has never flown, much less the entire configuration. When Apollo 8 launched, it was the beneficiary of George Mueller’s legendary all-up testing idea. From its earliest days, NASA had favored a plodding, incremental strategy of testing various subsystems, adding more along the way as any problems were discovered and sorted out.

Mueller, NASA’s Deputy Administrator for Human Spaceflight, realized the agency would never meet President John F. Kennedy’s end-of-decade deadline for a lunar landing unless testing was accelerated. He proposed just putting the rockets together and flying them with as many systems as were available. Even at that, NASA still flew sub-components of the Saturn system before launching the full stack. Apollo 4, an uncrewed test, used only two of three stages and the first manned Apollo earth-orbit flight, Apollo 7, launched on a Saturn 1B, not the Saturn V.

Nonetheless, NASA moved at a blistering pace. Just 60 days after Apollo 7 flew, Apollo 8 launched for the Moon. The mission had originally been intended as a high earth orbit test of the command and lunar module, but the LM wasn’t ready. Even before 7 flew, NASA reconfigured Apollo 8 as a lunar mission. It stunned the world that Christmas Eve in 1968.

Artemis and the SLS, by comparison, is moving at a glacial pace. The only major component of it that has flown somewhat configured is the Orion crew capsule—in 2014. Artemis 1 was originally slated for a 2016 launch, a date that slipped six years, something unthinkable during the Apollo years. But it’s a different world now. We’re still locked toe-to-toe with the Rooskies, but not in a space race. Now, it’s the Chinese, whose space intentions are, in my view, malign.

During the Apollo years, NASA’s budget was as much as 4.5 percent of the federal budget. Now it’s under a half percent.

Given that, it’s probably miraculous that any kind of booster stands on a pad bore sighted on the moon, much less one that will carry humans there on a lunar flyby on the next flight (planned) in 2024. In a sense, NASA is channeling its all-up history because it won’t fly any test flights in the interim.

In the heyday of light aircraft manufacturing, we had something called “parts-bin airplanes.” The airframers dreamed up incrementally new models by mixing and matching parts they were already making. Piper did this with the Cherokee line, Beech with the Musketeer, the Sundowner and the Sierra. NASA kind of did this with the SLS when the grand plan to get to Mars with the ambitious Constellation program was canceled, along with two planned new boosters, the Ares I and V. Altair, the follow-on to Apollo’s lunar module, was also flushed.

This is why the SLS booster looks like it does, a skinny tall thing compared to the Saturn V’s brawny three-stage stack. The SLS is basically a reshaped Space Shuttle with a giant compartmented fuel tank using the same cryogenic hydrogen and oxygen and the same Aerojet Rocketdyne RS-25 engines that served as the main shuttle engines. The SLS has four and initially, it will use engines already flown on the Shuttle. To get this rig off the ground—and in fact, to provide 75 percent of its initial thrust—the SLS uses the same segmented solid rocket boosters that flew the shuttle, but with one extra segment. NASA has enough of those for eight SLS flights, after which new, fiber-wound composite boosters developed by Northrop Grumman will be used. All of this hardware is expendable.

The SRB components are, shall we say, experienced, with one aft skirt dating to 1984 and numerous other parts with multiple shuttle flights. The RS-25 engines have all also flown multiple Shuttle missions. If this sounds a little like a homebuilt being assembled from salvage parts, well, maybe it is. But all that hardware was expensively designed to be reusable and it is flight proven, so why not? During the Apollo era, NASA was inventing new stuff on the fly, but on 10 times the budget.

And therein lies the downside of repurposing existing technology. You lose the developmental edge to invent new things. On the other hand, we have the private sector—mainly SpaceX—doing that at a smart pace so perhaps we’ve reached the ideal mix.

Although Apollo 8 and the eventual Apollo 11 landing were widely hailed as inspirational, the awe wasn’t universal. Some at the time questioned whether the expenditure and risk were worth the gain, but there was at least keen national interest. On the eve of the Artemis 1 mission, there’s a little of that. The mission is getting wide if painfully shallow press coverage, but there are far more outlets to treat it in detail than ever before. NASA will live stream the launch here and onboard and external cameras will provide imagery far more compelling than the grainy TV of the Apollo years. Thousands are expected along the Space Coast to view the launch in person. I wish I could be one of them for it’s going to be quite a spectacle.

These will be expensive launches, but when have they ever been anything else? Cost per launch will be north of $2 billion, compared to $450 million over the life of the Space Shuttle Program and $1.2 billion for Saturn V launches, adjusted for inflation. Some people will never see this as worth it, others will always think it is and even as a diehard skinflint, I share the always-worth-it sentiment. I mean, come on, we’re going back to the Moon after two decades of stooging around in earth orbit on the International Space Station. It’s time to start serious exploration again and if it has to be done at a snail’s pace because of budget and political considerations, that’s better than not doing it at all.

Long-term presence on the Moon—this time at the lunar poles—is a worthy scientific aspiration and will inform what comes next, a mission to Mars. Humankind is a curious, exploratory species. If we weren’t, we would still be perfecting painting on the walls of caves.

So yeah, Artemis 1, go slip the surly bonds. We’ll be watching. And cheering.