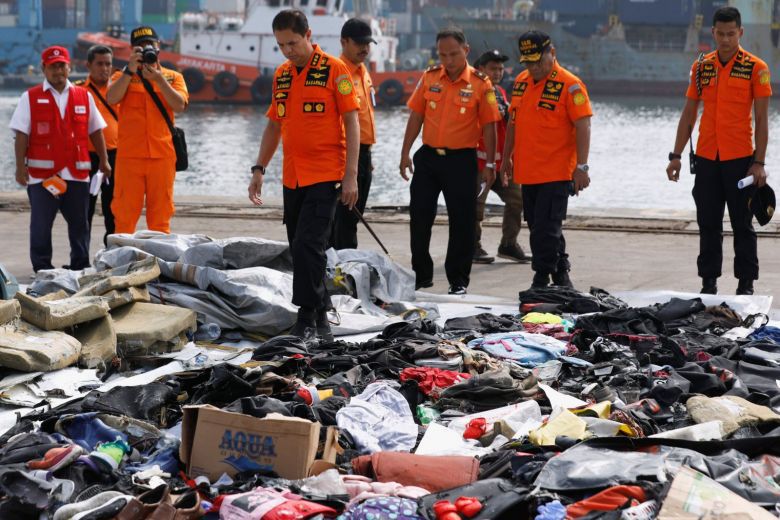 An unbroken chain of faulty aircraft design, poor pilot performance and maintenance oversights caused last year’s crash of a Lion Air 737 MAX, according to Indonesia’s air safety board. In its final report on the Oct. 29, 2018, crash off Jakarta, the report on Friday listed nine findings that formed a causal chain leading to the crash of Lion Air 610 in the Java Sea, which killed all 189 people aboard.

The nearly new 737 MAX plunged into the water 10 minutes after taking off from Jakarta. The crew lost control due to a malfunctioning trim subsystem called MCAS, but lapses in training, poor cockpit resource management and inadequate maintenance were also at fault, according to the Indonesian report. “From what we know, there are nine things that contributed to this accident,” Indonesian air accident investigator Nurcahyo Utomo said in a news conference announcing the report’s findings. “If one of the nine hadn’t occurred, maybe the accident wouldn’t have occurred,” he added.

The entire MAX fleet of nearly 500 aircraft was grounded following a second crash of an Ethiopian Airlines 737 MAX in March 2019 under similar circumstances. All of the aircraft remain grounded as Boeing engineers a fix and recertification of the aircraft. Hard dates for its return to service haven’t been announced and this week, two airlines—American and Southwest—reported that they’ve suffered multimillion-dollar losses due to the MAX grounding.

According to a slide presentation by Indonesia’s National Transportation Safety Committee, Boeing made “assumptions … about pilot response to malfunctions which, even though consistent with current industry guidelines, turned out to be incorrect.” Because of this, the report said, Boeing mistakenly deemed input from a single angle-of-attack vane to the airplane’s MCAS to be adequate, making it vulnerable to erroneous data from that sensor.

Further, said the committee, Boeing’s manuals and the airline’s training failed to provide adequate information for pilots to respond to uncommanded MCAS activation, a system of which they were entirely unaware. The agency also said an AoA disagree alert—which would alert crews to a failure of one of the MAX’s two AoA vanes—wasn’t correctly enabled and thus didn’t allow flight crews to diagnose the fault nor the airline’s maintenance technicians to diagnose a mis-calibrated sensor, which had been bought from a Florida company as an overhauled replacement part.

The committee said it couldn’t determine if the installation of a repaired AoA vane was properly tested, but it said the mis-calibration wasn’t detected and the airplane took off in an unairworthy condition. The sensor’s calibration was 21 degrees in error, according to the report. The investigation revealed lack of documentation in flight and maintenance logs such that the accident crew was unaware that a flight the previous day had experienced runaway trim due to the faulty MCAS. That crew disabled the stabilizer trim system after the faulty MCAS activation, but it didn’t report the fault once it landed at the destination.

The report said the pilots of Lion JT 610, the accident aircraft, were distracted by multiple alerts, repetitive MCAS activations and numerous ATC communications and didn’t manage the emergency effectively, partly because of poor crew resource management. The committee noted that these deficiencies had been identified previously in training and reemerged during the accident flight. When the MCAS activated, it took the first officer four minutes to locate the proper checklist because he wasn’t familiar with required memory items. During training, the same pilot had shown unfamiliarity with Boeing and airline standard operating procedures and had weak aircraft handling skills, the report revealed. Although the FO was experienced in the 737—4286 hours in type—his training record reflected numerous deficiencies, including “major problems” controlling the aircraft and being too rushed and too rough with the controls on approach.

In both the Lion Air and Ethiopian Airlines accidents, the MAX’s Maneuvering Characteristics Augmentation System or MCAS was cited as a causal factor. Because the MAX has heavier engines mounted further forward on the wing than in previous 737 models, Boeing found it exerted a pitch up tendency at light weights and aft center of gravity conditions and high AoA. To counter this, Boeing installed the MCAS trim subsystem to automatically apply nose-down stabilizer trim to mimic the pitch control forces pilots were accustomed to in previous 737s. MCAS was designed to activate only when the airplane was being hand flown with flaps up. MCAS relied on angle-of-attack data from a single sensor vane, even though the aircraft has two vanes. Boeing failed to include documentation on MCAS in aircraft FCOMs because it assumed pilots would rarely, if ever, experience MCAS activation.

Following the FAA’s signoff on this system, Boeing subsequently made the MCAS pitch trim schedule more aggressive without reporting the change to the FAA, according to reporting by The Seattle Times. Ultimately, its stabilizer trim capability increased from 0.6 degree to 2.5 degrees maximum. A recent review by an international panel, the Joint Authorities Technical Review, found that the FAA delegated too much of the MAX’s certification oversight to Boeing and it failed to understand the implications of Boeing aggressive implementation of MCAS.

Although both accidents occurred outside the U.S., the NTSB reviewed the accident data and issued a recommendation that the FAA and manufacturers consider how pilots will react in the face of multiple alarms and warnings in the cockpit. Indonesia investigators likewise noted that the two pilots of JT 610 appeared to be overwhelmed by the high workload of multiple warnings, including a left-side stick shaker that activated continuously from two seconds after takeoff.

The Indonesian report lists of number of recommendations, including specific improvements in the way Lion Air and its maintenance contractors document maintenance and how pilots write up and pass on abnormal events. It did not, however, offer any specific recommendations on improved training for Lion Air pilots.