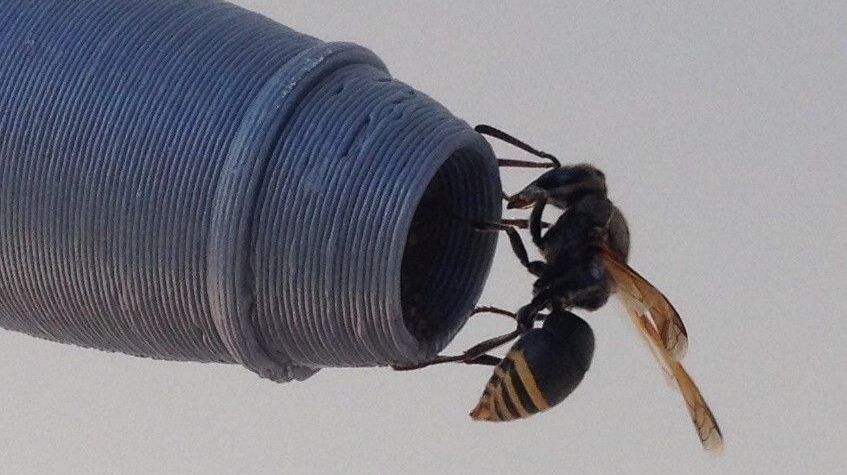 The average wasp’s interaction with an airplane almost always ends up as an annoying smear but there is a species that can actually bring down even the largest plane, hypothetically at least. According to ABC News, Australian authorities are studying methods of preventing the so-called keyhole wasp from setting up housekeeping in pitot tubes. It seems the all-important aluminum tube is an attractive nest site for Pachodynerus nasidens, and that’s resulted in some rejected takeoffs and returns to Brisbane International Airport.

The wasp is native to the Caribbean and is a newcomer to Australia. It was first noticed in 2010 and discovered at the airport in 2012. It’s an efficient nest builder and scientists have seen it block a pitot tube within 30 minutes of the arrival of an aircraft. That involves finding a fat caterpillar and stuffing it in the pitot tube before laying an egg and then sealing up the opening with mud. What’s perhaps more disturbing is that the wasps actually seem to seek out pitot tubes. One of the researchers on the project, Allan House, confirmed anecdotal evidence from ramp crews that wasps would appear as soon as the aircraft was parked at the gate, wait for the pitot heat to dissipate and carry out their bid to ensure the success of their species. “These wasps are not the only ones to do this, but they seem to be particularly adept,” House said. The wasps seem to prefer Airbus pitots.