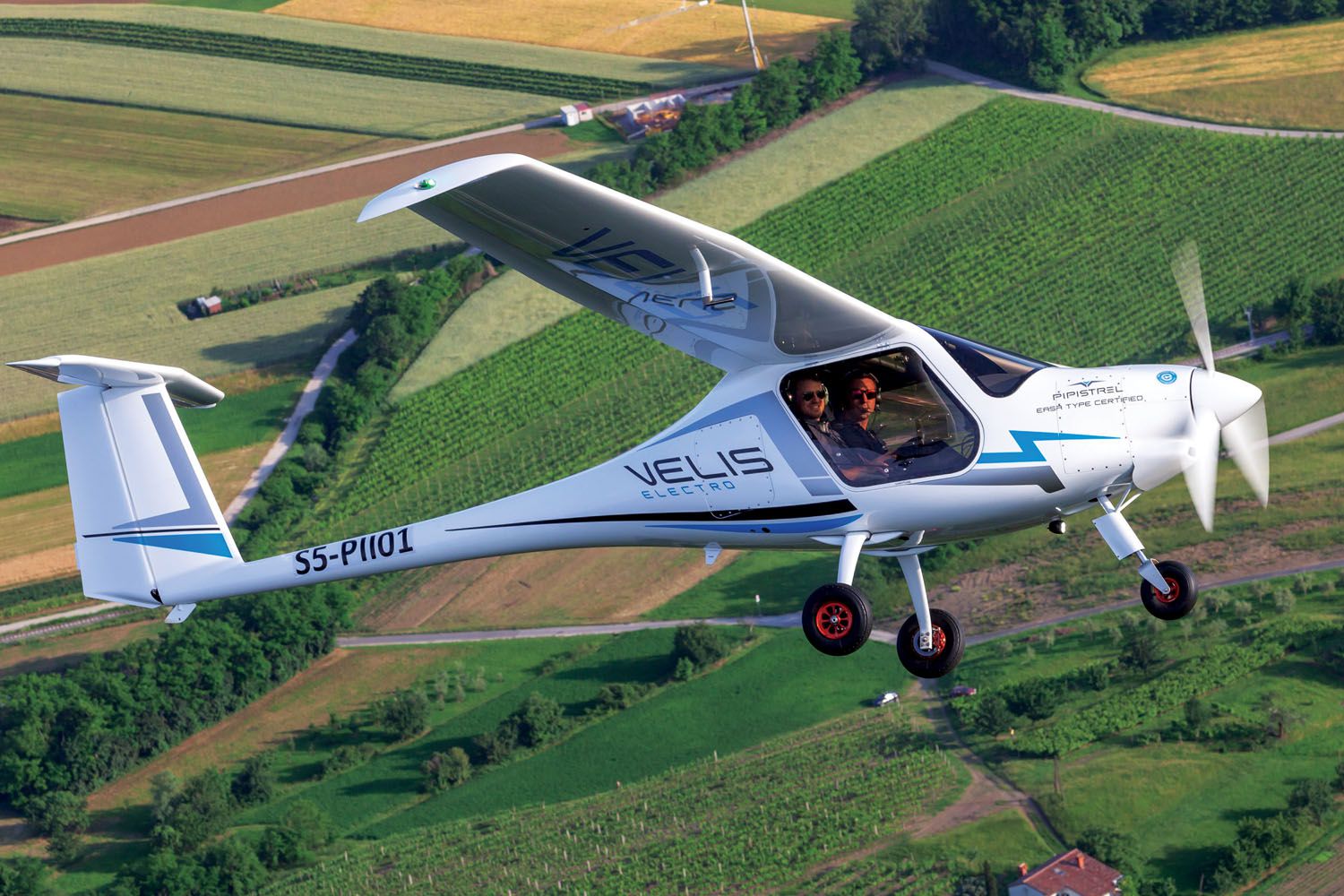 If you’ve attended any electric aircraft symposiums in the last decade, you would be forgiven for thinking Slovenia must be a land of budding geniuses. Pipistrel, the Slovenian electric aviation pioneer run by the father/daughter team of CEO Ivo and Taja Boscarol, wins European Union awards for its green operation, pulling enough solar-generated power from the skies to run its factory. That kind of efficiency shows itself in their aircraft, winning a series of NASA Challenges including the 2011 Green Flight Challenge, the largest prize in aviation history at that time.

We even have some indications the company is trustworthy. In 2015, Ivo and a pilot/adventurer, Matevž Lenarčič—a customer who has flown two record-breaking flights around the world in Pipistrel aircraft—were honored by the newspaper Politico as two of the most influential people in Europe for their environmentally-conscious aviation endeavors. In 2016, Ivo was “chosen as a member of the New Europe 100 list, a list of outstanding innovators from Central and Eastern Europe.” In 2018 Pipistrel won the Slovenian Readers’ Digest award as a “Trusted Brand” for the sixth year in a row.

The firm has over 13 years’ experience integrating electric motors into their products. They won the 2011 Green Flight Challenge with their G4—powered by the largest electric motor to have flown at the time. Their electric Taurus motorgliders enable self-launching and green touring. Their Alpha Electro trainer is being built in Slovenia, Italy and China. Now their newest craft, the Velis Electro, is certified and running a proprietary liquid-cooled electric motor system.

Its E-811 motor—the first electric motor certified by the European Aviation Safety Agency (EASA) is now available to other original equipment manufacturers—and to homebuilders. Given friendly cautions, the motor may be the answer to some amateur-built and even vintage crafts’ need for new power.

The certified package includes the liquid-cooled motor and liquid-cooled power controller. Producing 57.6 kW (77 hp) peak power and 49.2 kW (66 hp) of maximum continuous power, the motor and controller could be most closely compared to the Rotax 80-hp unit powering many Light Sport Aircraft.

Noting its acceptability in the United States, Pipistrel claims, “The E-811 is the ideal powerplant for powered sailplanes, UL, LSA and VLA aircraft, where a type-certified engine is required. It may also be installed on Part 23, Level 1 aircraft and other distributed propulsion applications by applying the corresponding special conditions.” (This last sentence opens visions of multi-motor craft with myriad possibilities for augmented lift or uniquely located motors and propellers.) It can turn clockwise or counter-clockwise and supports a wide range of propellers. The motor can also be adapted separately as an individual component, again opening possibilities for unique configurations.

A “state-of-the-art axial flux synchronous permanent magnet electric motor” gives us a pancake-like motor with great torque. A radial-flux motor is a more traditional unit that encloses a rotor within a stator (a rotating part within a stationary housing). This limits the size of active elements to those that can be contained in a limited space. Axial-flux motors can place their magnets at the outer edge of a large circle, giving a mechanical advantage. As Pipistrel points out, “Lighter and more compact, these motors are also more powerful than radial flux motors, making them ideal for their application in aviation.”

Pipistrel produces two similar-looking aircraft, the Alpha Electro Trainer and the Velis Electro. Despite their similarities, they are different in configuration and power systems. The earlier Alpha Electro, based on the Alpha Trainer, replaces the 80-hp Rotax engine with Pipistrel’s air-cooled PEM 60MVLC, capable of one minute’s output of 60 kilowatts (81.6 horsepower) and a cruise-all-day 50 kW (67 hp). Its 34.5-foot wing lifts a Light Sport empty weight of 368 kilograms (809.6 pounds) with batteries and a loaded gross of 473 to 550 kilograms (1042 to 1213 pounds).

The Velis Electro, an electric embellishment of the Virus, has a half foot more wingspan and a 600-kilogram (1320-pound) maximum takeoff weight (MTOW). Its motor “is entirely liquid-cooled through a single cooling circuit with a mixture of 50% water and 50% glycol. The cooling system is part of the installation and can be provided by Pipistrel.” Even though 49 kilograms (108 pounds) heavier than the Alpha Electro with an empty weight of 428 kilograms (942 pounds), the Velis carries a 10 kilogram (22 pound) lighter payload that its LSA cousin, possibly because of its heavier liquid cooling system.

Both claim good rates of climb: 1220 feet per minute for the Alpha, 647 fpm for the Velis. The lower climb performance for the Velis may come from its heavier MTOW, which unlike fossil-fuel powered aircraft, does not decrease as electrons are shuffled about.

Beth Stanton, writing in the July 2020 Sport Aviation, noted the snappier takeoff performance of the electric craft over its Rotax-powered cousin. That quieter operation, “more docile handling characteristics” and “smoother power than the four-cylinder combustion engine” won her over. She promised to return for more, “Because once these babies are certified for instruction, I’m going to be first in line to get checked out to fly them.”

Her “baby” was one of four Alpha Electros used in Joseph Oldham’s Sustainable Aviation Project, a flight training operation with the ambitious goal of providing flight training for low-income youth. The low cost of operation helps make this goal plausible for the non-profit organization. Consider that generous souls make the Experimental
Aircraft Association’s Young Eagles program possible, offering first aircraft rides to children. Few can afford to offer full-tuition scholarships to enable a kid to make it to a private ticket, though.

One flaw in the operation came about because of the air cooling, though—primarily from the motor controller reaching its temperature limit on repeated touch-and-goes. Tine Tomazic, group CTO and director of research and development, explained the 103°F temperature limitation as, “Well, that’s as high as we could test it in Slovenia.” Slovenia, flanked by the Mediterranean and alpine mountains, is not quite as well-roasted as California’s Central Valley. The solution was to reduce power on takeoffs and thus limit heat buildup in the controller. Batteries had to be specially air conditioned during ground charging to help them reach full capacity.

One aspect of this operation is that Oldham and other partners in the enterprise can manage to offer flight training to kids who otherwise could never afford them or look forward to a life in aviation. Low operating costs help here, and may save many flight training operations.

Pipistrel proclaims, “Now all the other aircraft OEMs can also enjoy the benefits of a type-certified electric engine or boost the development process of their powered sailplanes, UL, LSA, VLA or Part 23 Level-1 aircraft!”

Their excitement didn’t keep me from asking some pointed questions of Taja Boscarol, who, with her father, was gracious in her answers.

How was the E-811 motor developed? Did it start with an EMRAX design? What elements and improvements were added by Pipistrel?

“The E-811 is an engine, comprising the electric motor and the power controller—it’s not only the motor. Only together do they perform the intended function. Pipistrel worked with subject matter experts, including EMRAX, to redesign the motor part and develop power electronics with design assurance and demonstrated levels of performance, safety and reliability. The design is proprietary and we cannot comment on how exactly the motor was improved, for obvious reasons.”

One problem Beth Stanton noted in her Sport Aviation article was the air-cooled controller and battery overheating in California’s Central Valley, where temperatures often top 100° F. Will your liquid-cooled motor solve this problem, and to what limit?

“The Alpha Electro can be looked at as the previous generation of the design, which is quite optimal for weight sensitive markets but has its limitations. One of them, because of air-cooled batteries, is operations in extremely hot temperatures. Velis Electro features all-liquid cooled systems, which enable operations in hot and cold environments, in meteorological conditions just like with conventionally powered aircraft.”

Do you have written guidelines for others wanting to install your motors and systems in other aircraft? How will one obtain STCs for such conversions on existing aircraft? There are obviously great differences between America’s FAA and the EASA and Britain’s rules.

“The E-811 is a Type-Certified engine, which is furnished with complete installation manuals, as well as operational documentation. An aircraft OEM can take the components and instructions to install the E-811 on their design, which assures the electric engine is used within its certificated limitations. Obtaining an STC or an original aircraft design TC with the E-811 is no different to installing a Type-Certified piston powered or turbine engine. The engine is Type-Certified under Airworthiness Standard CS-22 Sub-part H, Amendment 2, which should be recognized by all the mentioned authorities.”

Will you offer engineering assistance for those designing new aircraft around your motor and systems?

“We have a team of skilled engineers who can help other OEMs to properly install our system during the integration and offer support with the certification. To speed up their process to the market, Pipistrel can also offer design and manufacture of custom propellers and/or ducted fans that best complement our electric powertrains, given their mission specifications. We are cooperating a lot with authorities around the world, should our assistance be required on other OEMs’ pathway to commercialization.”

Can a buyer purchase a motor separately, or is it too well connected to your controller?

Likewise, can a buyer purchase a motor/controller and use his or her own battery system (or fuel cell system)?

What will each component sell for? An entire system?

“This depends on many conditions and variables, mainly on the quantity of units ordered. We devote ourselves to each customer individually and depending on their needs, unit quantity and eventual long-term strategic supply agreement, we prepare the best offer.”

Besides enabling experimenters to move from burning dinosaur remains in their forward-looking designs, Pipistrel’s STC potential may keep vintage aircraft flying. As the supply of parts for ancient Continental A-65s, C-85s, and even O-200s dwindles, even the most devoted antiquer may face grounding his or her treasured craft. Consider that four-cylinder Rotaxes sell for between $19,000 and $36,000. The E-811 system will probably be north of $25,000 at my best guess. This may seem high, but consider that a purchaser is getting an included battery pack that can be recharged for few dollars for each flight. Even a 12-gallon tank in a J-3 will cost $50 to $60 for a fill-up. Brushless electric motors don’t need oil changes or new spark plugs and can last thousand of hours before needing a bearing change (about the only thing needed for a major overhaul). It’s not hard to believe that a Pipistrel E-811 will outlast the airframe in which it’s installed.

Circumstances and economics may lead to greater adaptation of electric power in the near future. New designs that can take advantage of the flexibility of these powerplants will lead us forward, but the new motors may also help us preserve our heritage.

This article originally appeared in the January 2021 issue of Kitplanes magazine.