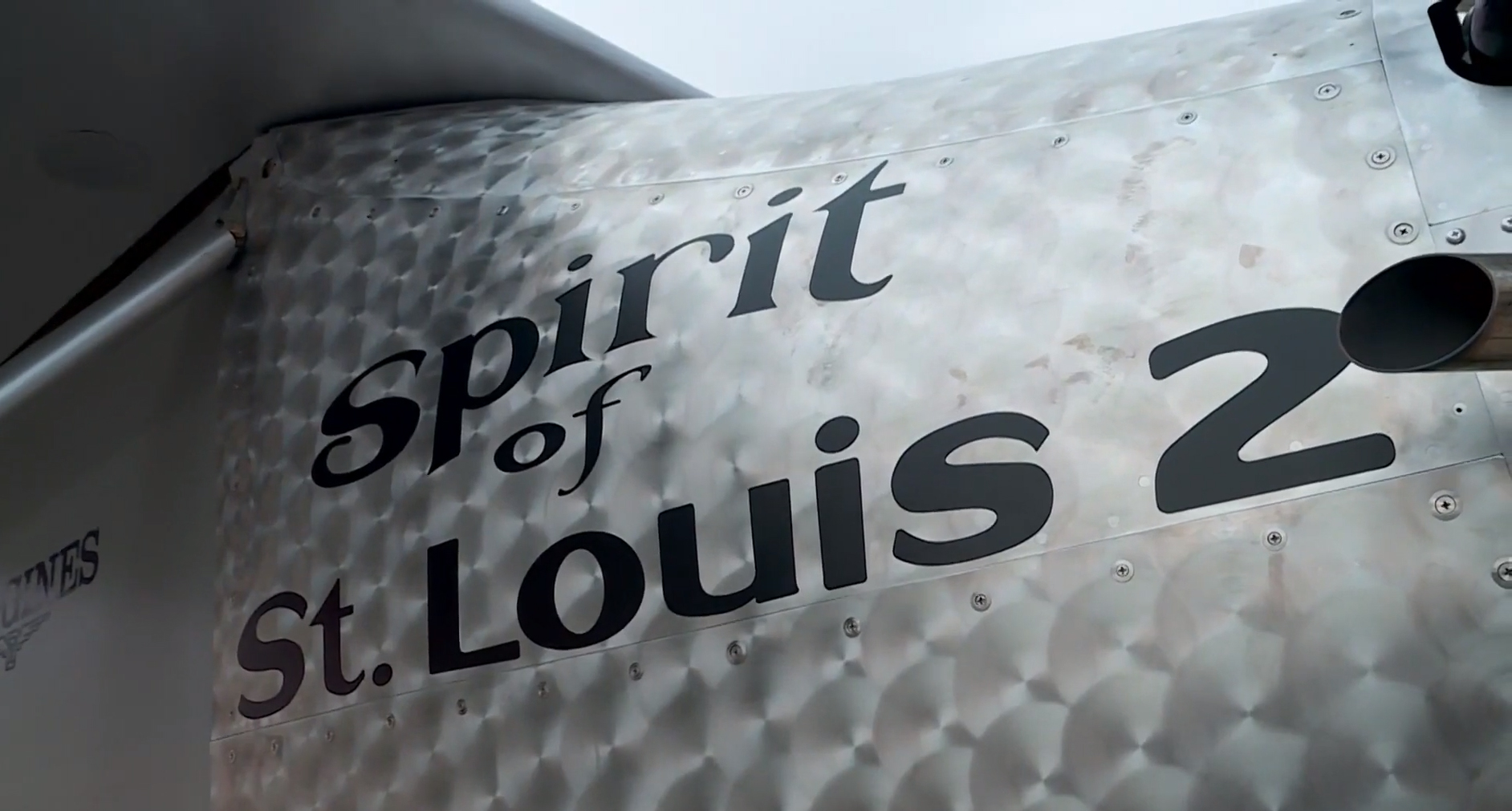 In 2010 I had the opportunity to fly the Spirit replica once around the patch with Sean Elliott as PIC. It absolutely responds like a Mack truck without power steering. How Lindbergh wrestled in to Paris is incredible.

This aircraft is one of two at Oshkosh. It’s not a true replica in that the fuel tanks have been reduced in size to convert it to a tandem configuration with the command pilot forward and secondary aft. The second example hangs in the museum and is a much more accurate replica. Mrs. Lindbergh autographed the fabric inside the cockpit.

I was able to fly EAA’s replica. As explained by EAA’s pilot–it isn’t the same airplane–the fuel system is obviously different, and the engine is different–HOWVER, the handling is the same. It is the worst-handling airplane of the 342 unique types I’ve flown.

Some have said “Lindbergh made it difficult to fly on purpose to stay awake.” The reality is that Lindbergh laid out the specs for it, and because of the short time he had to beat the competitors, they settled on a rework of an existing mailplane design.

Prior to the flight, we discussed the handling–and the pilot asked “Which seat would you like–the front seat, or the “Lindbergh seat”? Obviously, I chose the rear seat–though the front seat does offer better visibility. Takeoff and climb were not an issue, but we took the aircraft to altitude to do some airwork before landings–and I’m glad the instructor insisted on it! Because the rear seat is blind, we did a series of alternating 90 degree turns in the climb. I initially had problems with coordination for adverse yaw–the pilot explained “Ryan extended the wings to carry the load–moving the ailerons out and giving them a longer arm. They didn’t do anything with the tail, however, and Lindbergh mentioned it after his first test flight. Ryan offered to rework the vertical and horizontal controls–Lindbergh asked “How Long”? They replied “3 days”–and Lindbergh said I don’t HAVE 3 days.” To compensate, they extended the control stick to give more leverage. To start a turn, lead with the rudder, and LOTS OF IT–the long control stick is moved to the side (far farther than any other aircraft I’ve ever flown–perhaps 12″ measured at the top of the stick–and the stick then is moved back smartly. The aircraft bleeds speed in a steep turn–“keep them shallow.” All of this has to undone in the rollout–resulting in large movements of the controls–not “a gentle pressure” as we have come to expect. There is a large slip-skid indicator in the cabin–I could almost HEAR the ball hitting the end of the race! After a few minutes, I got the hang of it. (It should be noted that at the time the Spirit was manufactured, there were no standards as to how an aircraft should fly–that work was done by Bob Gilruth for NACA (and later head of NASA)–setting the standards for aircraft certification that allowed the US to set the standards for the world.

We did a couple of approaches to stalls (the pilot didn’t want to do full stalls) before heading back for landings. “Full stall or wheel landings?” I asked. He said “You know, I have more time and landings in Spirit-type aircraft than anyone in the world, and I never know!” When flying from the rear seat, I try for a wheel landing, and if it doesn’t work out, I do a full stall.” Following his advice, I did a continuous turn from the downwind, so I could see the runway out the left window–base to final at about 250′. From the rear seat, I was able to see the left main wheel, and simply “flew it on” to the runway–a good landing. Next time, I tried a full stall–the airplane quickly “unhooked” on me, and dropped it in. The third landing was back to a wheel landing.

The takeaway–EVERYTHING ABOUT THE AIRPLANE WAS A COMPROMISE–IT WAS BUILT SPECIFICALLY FOR THE NY-PARIS FLIGHT. Every effort was made to save weight–right down to “no starter, battery, or even a carburetor heat box (which nearly got Lindbergh during the ferry flight to New York–he had one installed). The fuel system was a nightmare–the controls were poorly done (as discussed above). Lindbergh had a specific request–keep the fuel in front of me–too many long-distance pilots were killed when they crashed and the fuel tanks crushed them. I’m SO GLAD to have had the opportunity to fly it–and SO GLAD THAT AIRPLANES TODAY DON’T FLY LIKE THAT!

Hanging Up The Spurs

Beautiful, Captain. Blue skies and tailwinds, and may others be as kind as you are.

Thank you for the post, especially the very touching second part. Like everyone I certainly do hope not to succumb to Alzheimer’s but should that wish fail to come true, I’d certainly appreciate to have some of my long-term-memory rekindled by a flight like this.

Poll: What Should We Do About Replacing 100LL Avgas?