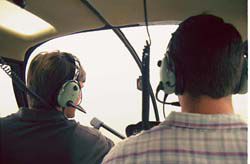 “Shine out, fair sun … that I may see my shadow as I pass.” Sound advice from Shakespeare’s Duke of Gloucester (Richard III), a CFI who understood the importance of looking outside the cockpit and away from the electronic gewgaws that distract us from flight. Gloucester was an unlikely inspiration as I recently underwent a biennial FIRC. If unfamiliar with the acronym it may sound like a twice-yearly TSA audit or a mildly intrusive aeromedical probe, except it recurs every two years and decodes as Flight Instructor Refresher Course. Or more personally, Flight Instructor Reality Check.

What is reality? Impossible to say outside of Firesign Theatre. Face it, it’s been a strange year on planet Earth, so renewing/refreshing my flight instructor certificate was a timely assignment that dragged me away from YouTube. FAR 61.197 tells CFIs how to renew their certificates every two years or lose the privilege to sit right seat in a 60-year-old Cessna, wondering how the hell the heater works. Note: No one knows. Let that ticket lapse, and you’re facing another CFI checkride, which could prove embarrassing.

The FAA offers several refreshing options; we’ll consider two. If during the preceding 24 months, the instructor endorsed at least five students for a certificate or rating practical test, and 80 percent passed on the first try, then renewal is semi-automatic. There’s e-paperwork, of course, and possibly a goat sacrifice to IACRA. I haven’t exercised that option lately, but when I was a busy primary instructor, I’d visit the FSDO, present my punch card of two-year successes, then stroll out with a renewed certificate plus a free jelly doughnut. At least I think they were free … like those pens they leave on their desks.

Another option is to check into a sanitarium with 57 other expiring CFIs for a two-day, butt-numbing class with a ground instructor who sticks tenaciously to the syllabus. The one time I chose that route it reminded me of structured learning in Army basic training: “This, gentlemen, is the M18A1 antipersonnel Claymore mine; note the safety placard, ‘Front Toward Enemy.’ Any questions? I didn’t think so. Moving on ….” I despise cram courses in Lysol-scented hotels, but what’s a procrastinating CFI to do?

Stay home like the rest of America and regain legitimacy in the COVID-safe privacy of your Ikea Slumber Suite™. My biennial go-to FIRC is King Schools, but other home study courses (Gleim, AOPA, Walmart …) qualify.  The medium evolved over decades from VHS tapes (Google it), through DVD and now, online. I suspect the next iteration will include a microchip implant, so whenever we stumble over a student’s question, Alexis whispers, “Stall occurs when the wing exceeds its critical angle of attack … shall I explain, Firesign Theatre?”

A FIRC is not a BFR, although successful completion qualifies for the ground portion, so it’s kinda like a flight review without the fun part—flying. I whine every two years when faced with the renewal course but am predictably humbled by what I’d forgotten since the last recharge or never completely understood. Despite a half-century in aviation, what I don’t know about flight could overload a stretch DC-8. What I do know was largely acquired when students dreamed of one day flying DC-8s. Included in my past are countless stories of ways I’ve screwed up either as pilot or air traffic controller, plus accidents I’ve witnessed but, I swear, didn’t cause. Such experience the FAA now recognizes as invaluable and not merely actionable.

Effective flight instructors are storytellers who keep the mythology alive that makes aviation cool, and if you don’t think flight is cool, you’re not worth knowing. Inexperienced instructors have temporary authority to borrow other instructors’ tales until earning their own. To that administrative end the FAA promotes scenario-based instruction, wherein the instructor utilizes what-if situations, even if the virginal CFI has yet to personally what an if. Examples: What if weather changes enroute and, heaven forefend, you must deviate from the flight plan? What if ForeFlight quits, and you’re forced to shout, “Mayday!” while resorting to paper charts? What if your credit card is declined while placing an emergency order for them? Textbook answers aren’t as important as displaying the pluck to anticipate risk and handle trouble’s inevitable appearance. Such as: On every takeoff I ask, “Where would you go if the engine quit?” When the real event happens, you’re two seconds ahead of the game, allowing time to switch to a tank that actually has gas in it.

At heart I’m an old-school, daytime VFR pilot with my tail dragging in the grass. Gadgets don’t impress me so much, especially in the traffic pattern, where I’m scanning both sky and ground “that I may see my shadow as I pass,” and more importantly, the shadows of other aircraft passing me. So, I was pleased with the emphasis FIRC places on flying the airplane and not merely monitoring it. John and Martha promote decision-making skills, illustrated with confessions of chillingly poor choices they’d made in their nascent flying days.

That noted, almost getting killed in an airplane is not a proactive approach to safety. I know. Tried it too many times. If the FAA’s Wings program awarded medals for near-death stupidity, I’d have earned a chest full before turning 40. None to be read as badges of courage. Defying reason didn’t make me a better pilot but merely showed how lucky I’ve been. Passing those warnings along to future pilots won’t prevent stupidity. Each generation will, and should, explore safety envelope margins, because that’s what pilots do. By pressing the edges of risk, we expand our skills and, frankly, have more fun. By recklessly setting markers beyond reason, though, pilots create a bogus sense of well-being: “Don’t worry, folks. I’ve scud-run Death Canyon before and survived, therefore we’re good.” Misinterpretation of what seems, but isn’t, safe can kill. As storytellers, CFIs might explain that occasionally the Claymores we set, thinking we’re protected, can be pointed toward an enemy that, as Pogo warned, is us. Chances are I’ll need reminding in two years.