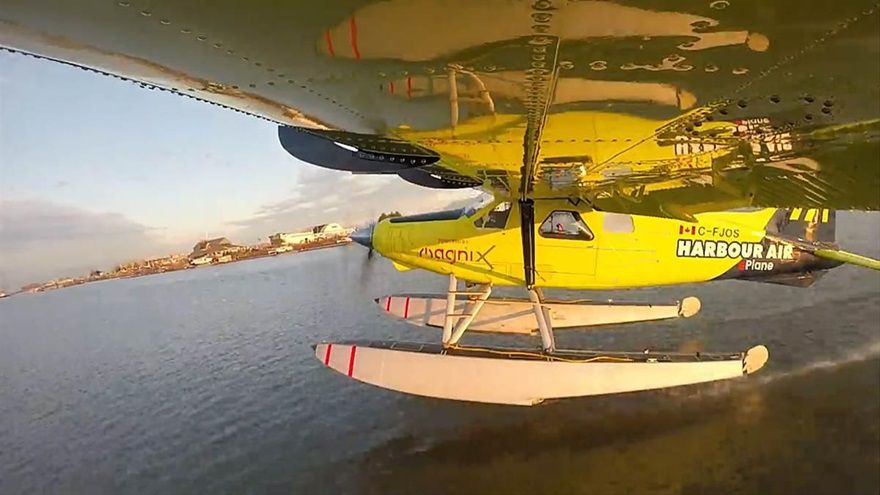 When then 15-year-old Greta Thunberg gave a face and a voice to the Fridays For Future movement in August of 2018, climate change was already a passionately discussed topic around the globe. What followed as the global movement gained momentum can be described as a historical miracle of modern times.

Rarely in history have so many people been triggered into instant and far-reaching action-ism and rarely ever did politicians get handed a larger pile of homework assignments. Rescue the planet and humanity! With some rigor and velocity, the world’s attention fell on CO2 and consequently upon the propulsion systems of personal and mass transportation devices we know as automobiles and, of course, airplanes. By the time the term “Flight Shaming” appeared, I knew we were on the way to finding E (for electricity) in just about everything and enroute to deep trouble.

As a person deeply engaged in and passionate about GA and particularly seaplanes, I saw some stormy clouds ahead, wondering if and how we could finally break free of avgas-guzzling Lycomings and Continentals. News about Harbour Air’s recent first flight with what I call the E-Beaver has been filling my inbox for more than three weeks now and as a seaplane guy, I am surprised to see so much excitement over this five-minute flight.

I expected less of a freak-wave after seeing the Equator’s P2 Excursion create nowhere near such a Tsunami within the industry and international press. Equator Aircraft has been working on this concept since 2010, with its head of company having to navigate hell and high water to bring the idea across and to find funding for what was, way back then, just an outlandish idea. Its hardly the first E-Plane to grace our sky. I had my Eureka moment, though: When money is no issue, things develop rapidly and the general news media jumps on it like a mouse jumps on cheese. And rapid development is no stranger to GA.

Even though I suffered the bias that mixing electricity with water was unattractive, I also learned that closed circuits between motors and batteries are one solution. There is no ground wire attached to the airframe. Meanwhile, upsetting an electrically powered aircraft in water appears to be not much of an issue, either. Large bodies of water will simply absorb the short. No shaking bodies, no smoke puffs being emitted from ears, nose and mouth after impacting water. Beside the questions and biases we all face—some more, some less—people who still remain critical of E-Mobility are often accused of being bullies or at odds with young people, autism, girls in general or any narrative fitting a convenient mixture. Yet, many of my own questions remain unanswered. Here’s just five of them:

(1) Where do we get the lithium for these batteries and at what environmental and human expense? (2) Can we shoot non-recyclable batteries into outer space, when we finally discover that they present a huge waste problem? (3) Will we be capable of paying constantly increasing electricity bills, when energy companies completely switch off coal and nuclear powerplants and revert to water, wind and sunshine for the alternative? Green energy is rather expensive in Europe and prices are hiking quarterly.

(4) Will temperatures fall measurably by banning gasoline and fossil-fuel burning engines from primarily personal transportation, while completely ignoring much larger environmental abuses? (5) Where will we find work for millions of people displaced from their source of income when and if this E-hype continues? Bonus: Will all of these measures and actions make a measurable difference for the climate on planet earth, if we all comply with the new recipe book? Fact check: Europeans currently send diesels to Africa by the oil-powered shipload. Diesels are treated like a pest here, which is not really a factor, because these will now continue to run outside the environment.

Electrifying everything, from rollers to strollers, mopeds, motorcycles, cars and now airplanes appears to be the chosen path for most of us developed people. Maybe it was just a matter of time until someone within the smallest and probably most mass-transportation-insignificant sector of aviation (seaplanes) would jump on this popularity train and assure them that “we” are listening and developing solutions. Harbour Air did it. They converted a fire-breathing Frankenstein Machine into an electric airplane. As a proof of concept, it’s quite a feat, but not much more, I’m afraid. Was history written? Some. I think commercial feasibility is about a light-year or two away.

The cost and effort to convert an existing fleet of aircraft to electric isn’t peanuts. Profit is what matters more than anything in commercial aviation. Let’s be optimistic and let the crystal ball say that 15 years from now, a fully loaded E-Beaver will carry four to six people for a 15- to 20-minute flight, before swapping a several-hundred-pound empty battery for a fully charged one. That alone seems to represent a logistical nightmare.

Today’s battery technology is still scary if we turn our attention to the pictures of recent Tesla fires or examine the e-fusion’s point of impact. There was not a single drop of combustible fuel on board. The thermo-chemical reaction of a runaway battery is my biggest concern with electric aircraft. These packs react to punctures, deformation, leakage and an array of other malfunctions and shorts and they sincerely dislike the wrong temperatures.

My thought is that it would be better to engage the challenges ahead critically and realistically. We need to acknowledge that we have homework to do for a cleaner environment, but that electric motors and four-hour cruise-range batteries seem futuristic.

We should not stay asleep on the E-concept, but we should also avoid raising expectations in people that getting this thing off the water will be quick, cheap or simple.

The hype around this E-Beaver certainly isn’t helping our generally ill-perceived general and business aviation industry. The press makes it look bigger and more beautiful than it actually is. We are nowhere close to having commercially viable, profitable or even remotely usable systems in place to even whisper about playing our part in protecting the environment with anything powered by electricity. We could do a ton by looking into synthetic diesel fuel, lowering CO2 emissions by large margins almost instantly, if given proper government attention and support. Something is better than nothing, my grandmother used to tell me, when I turned down the small piece of chocolate, holding our for a bigger piece later.

I hope there will be an audience cheering us on when we are finally forced to admit that too much, too quick is no better than too little, too late. I’ll go out on a limb and state my suspicion that two or three complete generations of pilots will have to come and go before we see currently leaded avgas aircraft powered by electricity. In our currently deflationary and declining industry, I wonder how many with a real urge to fly flying vehicles around in ADS-B corridors full of instant delivery drones for the fun of it we’ll be able to mobilize.

Jason Baker is based in Germany. He operates Seaplanemagazine.com