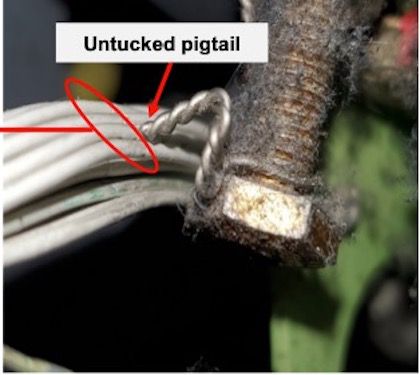 The NTSB has issued recommendations to the FAA and National Civil Aviation Agency of Brazil to order checks for wire chafing on the pitch trim controls of Embraer E-series aircraft after an incident in Atlanta in November. The crew of a Republic Airlines EMB-175 lost pitch trim control shortly after takeoff Nov. 9. As the aircraft, which had six passengers aboard, went through 2200 feet, the captain, who was flying, tried to engage the autopilot but it wouldn’t activate. He quickly diagnosed the problem but the autopilot/pitch trim wouldn’t disconnect. Both pilots had to use both hands to keep the nose down before the first officer’s switch finally worked and they were able to retrim the plane.

Investigators found a chafed wire in the captain’s control column caused by contact with an untucked safety wire pigtail. Republic inspected its other EMB-170/175s and found nine other aircraft with similar chafing. At least one other airplane at another airline had similar damage. The NTSB says all aircraft in the series, including 190/195 models and Lineage business jets, should be inspected. The investigators of the Atlanta incident also discovered the disconnect switch had been installed upside down. There are 667 U.S.-registered aircraft and more than 1,500 worldwide. The issue does not affect the new E2 generation of the aircraft, none of which are registered in the U.S.