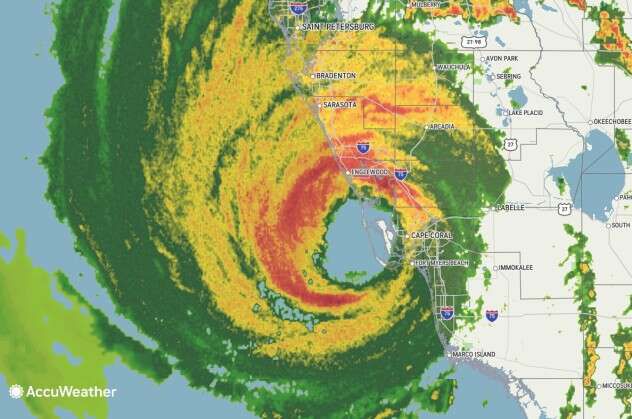 Getting out of the way of a dangerous hurricane seems like a no-brainer, but it can be a nuanced, nerve-racking decision tree. As Ian bore down on the west coast of Florida Tuesday, it proved simpler for me than in the past. In 2017, we bugged out for Irma and I swore I’d never do it again. The traffic on I-75, the principle north-south route out of Florida’s west coast, moved at 20 MPH for several hundred miles, if it moved at all. It was tense. Gas was in short, difficult supply.

My friend Marty and I compared notes via cellphone as we both drove north. “Not doing this again,” was the shared sentiment. So I sent a text early Tuesday, 30 hours from Ian’s landfall. “Hey Marty. 2017 dejuvu. You evacuating?” Reply: “Not planning on it. You?” I said I was undecided, still had some shutters to put up and would reassess. I did that at 1:30 p.m. on Tuesday. I examined the new NHC track plot and read the discussion that the steering currents were light with a lot of wobble. I sensed Category 5 potential. Not doing that, either, so we loaded the car and headed north. When I flee a hurricane—this is fifth time for us in 20 years—I get as far away as practical to be out of the storm’s influence. That way everything from hotel rooms to gas to flashlight batteries are in normal supply. We alighted in Atlanta.

The airplane is a different story. I have argued in the past that moving an airplane out of harm’s way makes sense, but I’m not loading the Cub with two people and a dog and trying to fly any distance to an unknown fate. The airplane, frankly, is just not that important to me and it’s fully insured. If I owned a Cirrus or a 210, I could (and would) load it up for the escape plan. But I don’t. Improbably, the hangar and the Cub inside it survived at Venice, although I haven’t inspected it since as of Saturday, I haven’t returned to Florida. I’ll let ya know.

Perhaps as many as half the hangars on the field were not as fortunate, according to my friend Dave Wimberly, who bases his RV there. His airplane made it through, but many of the hangars failed in just the way we knew they would: the sliding doors peeled away and either collapsed onto the airplanes inside or opened the structures up to progressive failure. Some of the airplanes remained inside and may be undamaged. Many clearly are bent.

I’ve seen this movie before. It was at Punta Gorda Airport 25 miles south on the morning of Aug. 14, 2004. Hurricane Charley had shredded the airport and virtually none of the old sliding-door T-hangars—same 1960s and 1970s vintage—were left standing. They had all failed for the same reason. The doors departed and exposed the interiors to wind loading. Impressively, one of the doors was wrapped around a concrete light standard like a pretzel. Just as impressively, a block of newer hangars stood intact, albeit peppered with missile damage from debris. Why the difference? The hangars were built to newer code and, critically, had bi-fold doors, not sliding doors that are simply unsuitable for a tropical climate. Bi-fold doors transmit the load to the rest of the structure rather than succumbing and turning themselves into unmoored sails. Such hangars also get about 15 percent more steel in diagonal bracing and closer centers for the cladding purlins. Yes, they are more expensive. But maybe that’s a worthy investment against having them destroyed by storms.

So in a sense, what we’re seeing here is climate Darwinism. This is an object lesson for all Florida airports, not just those on the coast. Older hangars with rusty steel and especially sliding track doors aren’t likely to survive even modest blows. Hurricane Ian was a Category 4, but it didn’t appear to generate Cat 4 winds at Venice. The highest recorded wind was 82 MPH, although it’s likely there were unrecorded higher gusts. Punta Gorda had 155 MPH. Might as well call that Cat 5. I haven’t heard of any significant damage at the airport, but I haven’t been there yet. My Cub partner has a hangar there and it appears untouched. Most of the hangars there were built after Charley wrecked the place in 2004 and are built to newer code.

Darwinism Part 2. News reports coming out of Punta Gorda show surprisingly little structural damage. Well, it’s not surprising to me because the city was hard hit by Charley and rebuilt to modern codes. The substandard buildings—including hangars—were weeded out by the harsh reality of a vicious West Indies cyclone. It won’t be the last. So much of hurricane survival turns on the vaguest variables and just dumb luck. Venice was in the northwestern outer eyewall—what the ancient mariners called the navigable semicircle—for about two hours. That meant the wind was out of the east and drove water out of the bays and Gulf and away from land. Had the track been 40 miles north, the reverse would have been true and the airport would almost certainly have been inundated, as Naples was.

(Sunday a.m. addition: Ivy McGiver flew into Sarasota Saturday to pick up her mom and passed over Venice on the way out. She sent me the photo above, which I have annotated.)

I have the feeling that Hurricane Ian will be another God storm, in the way that Andrew was in 1992. The damage is so extensive and so widespread that it will aggravate what Floridians who are paying attention should know. Real estate values and volume are totally out of balance with the ability to insure it against almost certain loss, building codes are still not what they should be because the construction lobby complains about higher costs and growth is out of control. Say what you will about climate change, the larger order effect here is that we’re just putting too many people and too much stuff in the path of major storms and not admitting how much it costs to build it properly. Just since 2017, when Marty and I bugged out for Irma, almost a million more people have moved to Florida, most clustering on the coast. Since Charley, it’s four million.

Not that it seems to matter much, given how flooding and wind damage seem to impact the interior and the opposite coast. People will have to accept how much it costs to build a hurricane-hardened house and that in certain areas—barrier islands—nothing should be built at all. The frugal trailer park retirement dream may just get scoured by the winds. I’m no longer shocked but appalled at the number of people who occupy such structures during an intense storm, including a woman who moved from Massachusetts six months ago, ignored an evacuation warning and spent six hours floating on a mattress.

My neighbor declined to evacuate which I consider about 50-50. We’re in a low-order flood zone that has never flooded, but that’s no reason to believe it never will. Marty told me weathering Ian was unpleasant. “I sure don’t want to go through anything worse,” he told me. Unfortunately, worse is almost certain to strike Florida. Again.

I’ve already made plans to be somewhere else.

I owe a special debt of gratitude to Kelly Leggette who allowed Val and I to stay several days at his fabulous FlyBoy hangar in Whitesburg, Georgia, and to friend Jeremy King for getting me up here. While we were stressed out on I-75, Todd Huvard found us further accommodations with Henry Lowe in Macon. What would the world be without such kind people to literally help us through the storm? I am humbled.