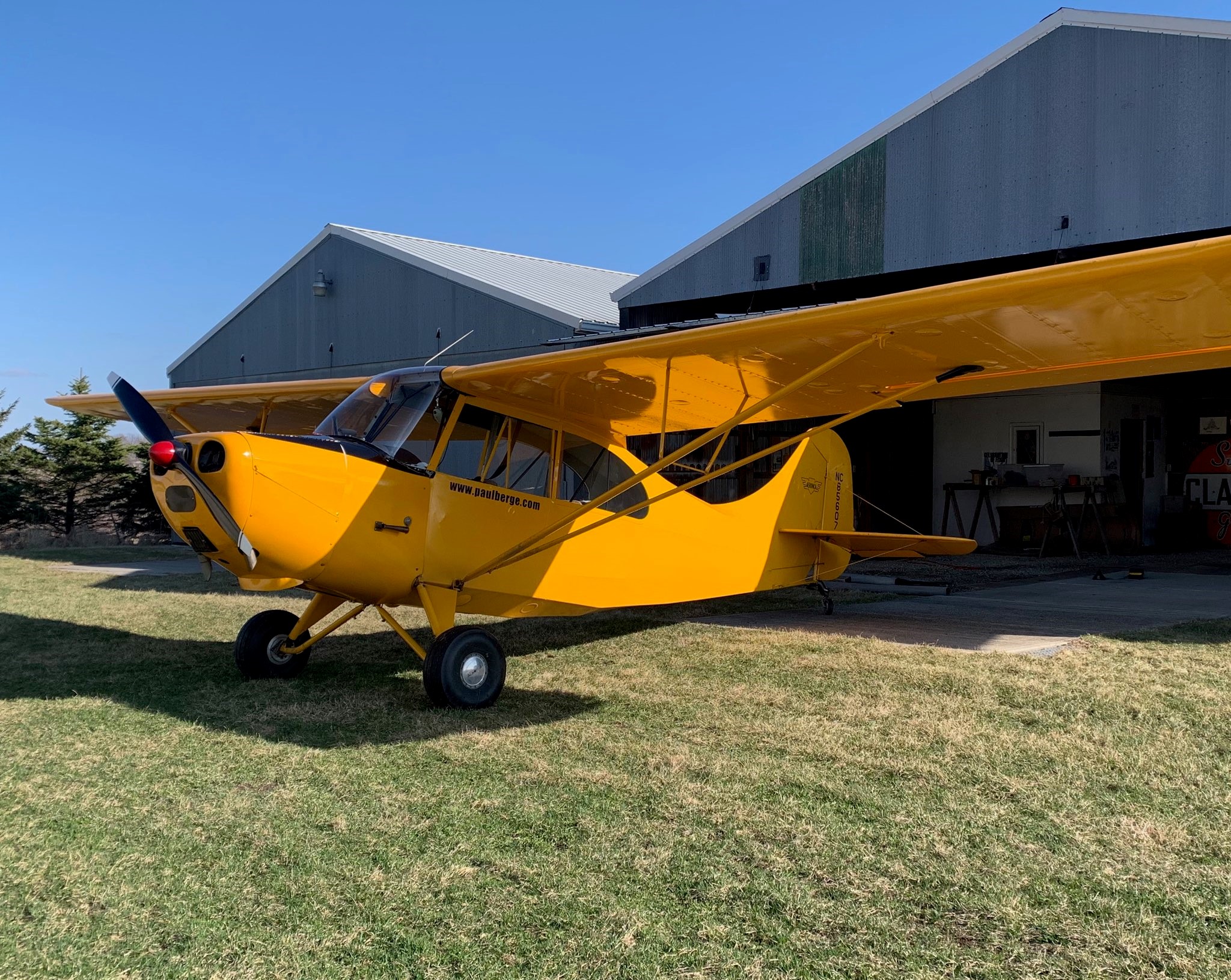 The hangar door’s ratchet clicked with a sound attributable to Archimedes when he expounded on the titanic power of levers and pulleys while attending Syracuse University in 252 BCE, making him more relevant to aviation than upperclassman, Hercules. So why, 2200 years later, did Lockheed name its C-130 transport after the latter and not the former? Dunno, but partial disclosure: In 1967 I became embarrassingly airsick aboard a C-130 Hercules, and the USAF never invited me back, which tangentially supports my observation that physics majors tackle life’s real problems, while jocks get all the glory. I’ve been neither but suspect that had Hercules designed my hangar door, the raising instructions would’ve read: Just Lift It, Wimp.

In 1977 I put my name on the hangar waiting list at a California airport. Ten years later, the municipality sent me a letter stating that I was now first in line and for a fee could reserve that slot until someone currently leasing a hangar died from natural causes or otherwise. The city clerk posed an ethical conundrum as I pondered benefiting from a stranger’s timely demise. Aircraft owners will do nearly anything for hangar space and hate seeing it wasted storing boats or aircraft that never fly. But by then, I was 2000 miles east and had built my own hangar on a private airfield. Technically, Gary designed and built it, while I provided free, unskilled labor, proving you get what you pay for. I could drag 2x4s up a ladder and, swinging a hammer, occasionally hit a nail, often my own.

My motivating delusion was that I could fly whatever I’d stuff inside this galvanized box over the next 37 years and counting. Abused occupants included a Bonanza, a Marquart Charger biplane, the Aeronca I’ve had since my California pilot-in-waiting days, and a Piper 180 Challenger—possibly the worst name in aviation marketing. “A real challenge to fly?” Not since Studebaker dubbed one of its cars the Dictator has corporate been more brand deaf.

Referring to a hangar as a box demeans all that goes into one, including its design. Ostensibly, we acquire hangars to shelter our aircraft from the very elements through which we fly: wind, sunlight, FARs. Some of us have been nutty enough to launch when towering cumulus clouds (TCUs) taunt with herculean brawn. I’ve since learned to calculate how quickly a squall line 15 miles away, moving at 60 knots, can remedy constipation, so I respect Zeus-dwelling mountains of uppity downdrafts, spitting lightning bolts. I also tend to view science in Classics Illustrated comic book images.

The real reason we shelter our airplanes is to seal the intangible experiences gleaned upstairs inside something tangible down here. Up there we’re Walter Mitty adventurers, pilots who grasp at the illusion of being in command. Down here, inside the hangar with hailstones machinegunning the tin roof, we’re storytellers or better yet, listeners. To me, an open hangar door offers an invitation for strangers to visit, admire dusty aerojunk on the shelves, artwork on the walls and ask silly questions, only to receive even sillier answers.

Visitor seating is beneath the 400-square-foot door suspended overhead, parallel to the floor, like the skillet of Damocles (another Syracuse alumnus, class of 354 BCE), ready to drop and squash impertinent curs who dare question homespun structural engineering.

To be useful, a good chunk of a hangar’s wall must relocate up, out, or sideways. We in the keep-it-cheap community are on a Holy Quail search for the perfect way to move hundreds of pounds of rigid door without paying full retail. Old school sliding doors are simple but nearly impossible to shove along misaligned tracks on corroded rollers. My door’s low-cost overhead retraction mechanism, by contrast, is higher-tech and inspired by the 1957 Ford Fairlane hardtop convertible.

Ford engineers satisfied America’s desire to lift a massive steel roof and slide it into a hole where the trunk should be without compromising the car’s Mamie Eisenhower sex appeal. Building on Ford’s ingenuity, Gary deployed pulleys, cables, counterweights, and a hand crank to create a system that supports Archimedes’ boast about the power of levers: “Give me a place to stand on, and I could move the earth.” Argue among yourselves if a pulley is a lever.

Three railroad rails (flat-footed rails for those wearing railfan caps) dangle from three cables that run overhead along pulleys from the hangar’s rear wall to the front door. The rails’ combined weight is slightly less than the door’s. When the door is released from the gust locks that hold it closed, the counterweights attempt to fall and pull the door up. Given more weight they would but in an uncontrolled maneuver likely to disturb the sparrows in the rafters. So, a rope runs from the windlass at the back wall vertically to a pulley where it makes a 90-degree turn and attaches to the center steel cable. By cranking the windlass, the operator adds “weight” to smoothly assist the counterweights in opening the giant maw through which airplanes exit, and loose characters on the airfield enter to lounge in the enviable sloth of GA civility.

Point—if there be one—is that every airport needs a Gary to implement the inspiration of Archimedes who, in his bestseller, On the Equilibrium of Planes, admonished pilots who store airplanes that never fly: “A closed hangar harbors a closed mind. Either crank yours open and fly or sell that flightless kiwi so the next pilot on the waiting list can get out of the rain.”

Note to USAF: I realize we haven’t spoken in years, but it’s not too late to accept my apology and consider renaming the C-130 after Archimedes, instead of some cartoon character wrestling coach.