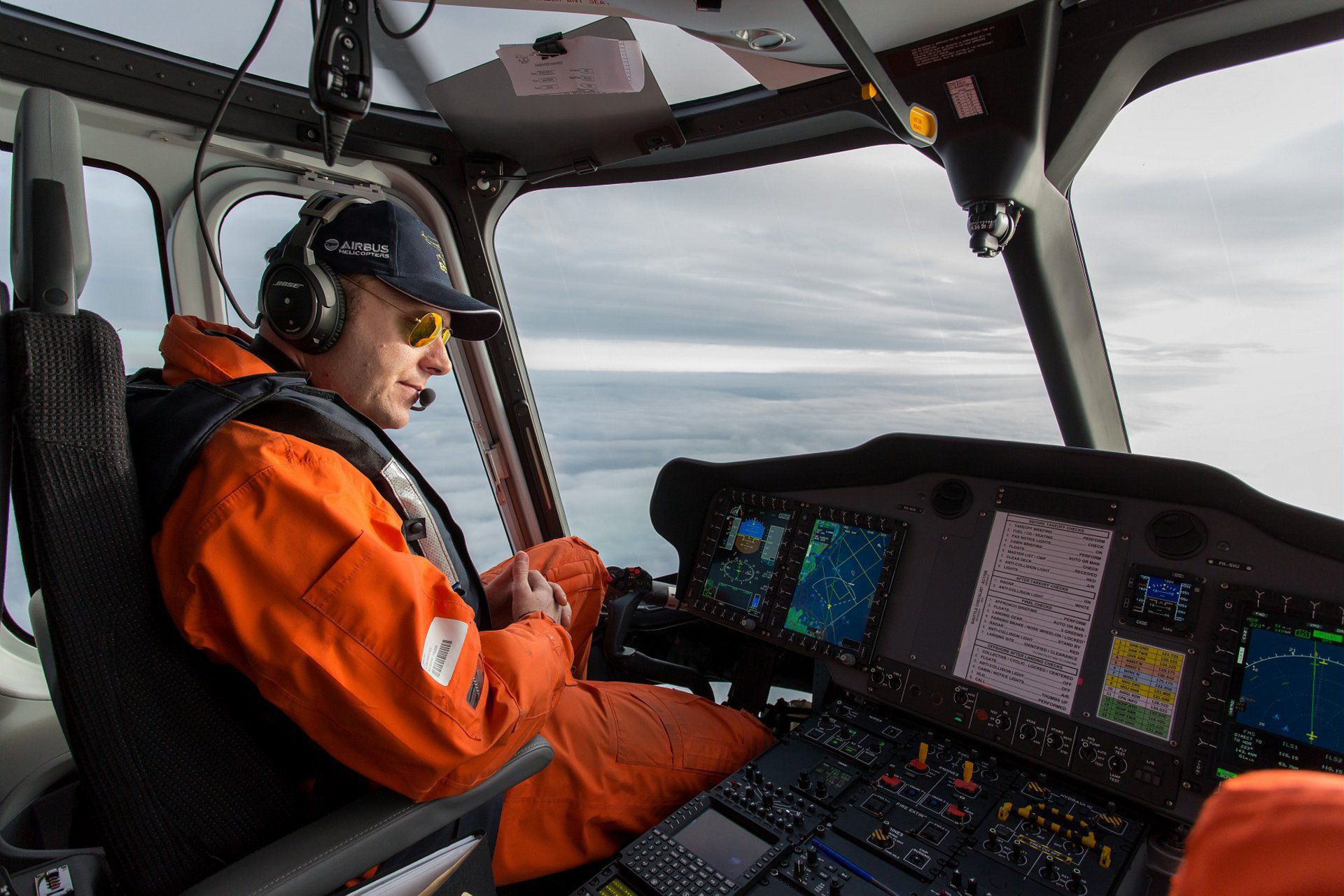 The recent Kobe Bryant accident in low-visibility conditions and the many others like it always elicit comments similar to, “What is a helicopter doing flying in IFR weather like that?” The short answer is because they can. Flippant, but true. By and large, fixed-wing aircraft are stable platforms. Trim them up, release the controls, and they tend to stay in whichever attitude they’ve been placed. If momentarily forced into another attitude, most will return closely to the original placement.

On the other hand, without some sort of stability augmentation, many helicopters do not have that luxury. While the collective remains relatively trustworthy, the cyclic (stick) has a mind of its own. Take your hand off of it, and the cyclic will try to find the shortest way to the floorboards, which can lead to uncommanded unusual attitudes and startled exclamations.

Short of an autopilot, various methods have been used to tame the cyclic, from introducing a friction arrangement similar in result to that employed in throttle quadrants to magnetic clamps that operate by pinning the cyclic in whichever position existed at the moment of activation. Without some sort of augmentation to provide some stability, the shortfalls of these sorts of fixes are obvious. But they do allow you to take your hand off the cyclic for short periods.

However, helicopters do have a redeeming feature: They can fly slowly and safely close to the ground and that quality is an important difference between fixed-wing and rotary-wing flight. That capability will give you time/distance to see something and react to it. Recognition of that capability is reflected in the weather limits approved for each type of aircraft and for helicopters. This has evolved into rules very different than those applied to airplanes and fixed-wing pilots don’t always understand why.

It has to do with recognizing threats and reacting to them. So, how much time/distance is needed to perceive a threat, process it, formulate a plan, and execute the plan? While many of us think that we’re at the top of our game and that we can swiftly process information and reach a solution near instantaneously, the reality is that it takes time and space. The time interval will be dependent on your proficiency level and your comfort level in that environment, but let’s pick 30 seconds as a representative figure. While time/space should be equal, many fixed-wing pilots will also have a minimum visibility distance at which they feel comfortable for a given altitude/speed.

For instance, given no obstacles or restriction to vision, most fixed-wing pilots would quite happily fly all day at 500 or 1000 feet above ground level at cruise speed of 120 knots or more.  However, drop the visibility to three miles in haze/fog, and the same pilots will be thinking about reducing speed. Drop visibility to two miles, and most pilots will have reduced speed and voluntarily/involuntarily reduced altitude to maintain good ground contact. Drop the visibility to one mile, and if not already there, the pilot has probably reduced altitude to around 500 AGL and further reduced speed; possibly to 90 knots or less.

Now is the time that the prudent fixed-wing pilot should carefully consider his/her options: The required 30 seconds reaction time equates to about 2100 lateral feet—well within the visibility limit. But going any slower and/or selecting flap will mean giving up maneuvering capability and may well encroach upon the distance necessary for the aircraft to turn away before overrunning the threat. In any event, visibilities below one mile are now probably well outside the pilot’s comfort level even at reduced speeds. It is like night driving in moose country; there is a point at which you’re overdriving your lights and you know you’ve given up reaction time.

It’s at this point that the helicopter comes into its own. Due to its unique ability to reduce speed quickly, the helicopter can easily maintain cruise speeds even in one mile visibility; reaction time is the only concern now. Thirty seconds at 120 knots equates to 3000 feet, still well within the one mile visibility available. (Note: I’m using knots for speed and statute miles for visibility, which is how it is reported.)

If the visibility drops to further to, say, 3/4 mile, the helicopter can maintain/reduce speed as necessary and reduce altitude as required to maintain good ground contact. Even at 90 knots, the required 30-second reaction time is still just over 2000 feet and still well within the visibility limits. If the visibility drops further to a half mile, the helicopter reduces altitude as required and adjusts speed commensurately. Anything between 60 and 90 knots would suffice. Even at 90 knots, the pilot still has twice as much distance required for reaction time.  As the visibility further reduces to ¼ mile, the pilot will—or should—slowly reduce speed to 20 to 40 knots as he reduces altitude to maintain good ground contact.  At these speeds, the required reaction time reduces to near zero; the helicopter can be brought to a standstill or landed in seconds.

Further reductions in visibility will result in further reductions in altitude and airspeed until the helicopter is moving at a walking pace at hover altitude or is on the ground. During this time, the helicopter has been in visual meteorological conditions (VMC) the entire time and that is the crux of rotary-wing flight in these types of conditions. The key principle is when you go down, you slow down. This inextricably links threat assessment and reaction time.

And that is why helicopters have different limits than fixed-wing aircraft. That is why a helicopter can legally fly in weather conditions of one-half mile/clear of cloud on the one hand and get an IFR clearance to fly SVFR clear of cloud with visibility less than a mile on the other. The helicopter has the ability to slow down, winkle along, and stop/land if necessary. Whether on a SVFR clearance or operating outside controlled airspace, rotary-wing aircraft easily maneuver in VMC conditions unsuitable for fixed-wing aircraft.

Now, every now and then, you’ll hear of a flying machine that wound up in cloud with disastrous results; the cause: inadvertent IFR or VFR into IMC. However, that statement is a misnomer. There is no such thing as “unintended” or “inadvertent” IFR. Most pilots who encountered it knew for minutes or miles that such a thing was possible. It should really be called “advertent IFR.”

That’s the reason for the saying in the helicopter world that if weather forces you go down, you slow down. Even so, there is always the distinct possibility that you may run into trouble before you have time to react; that is, you go from one mile in fog to zero-zero in cloud. Even if all precautions are taken, there’s always the possibility that ground contact could be lost and you have to quickly react.

To paraphrase Jack Nicholson: “If you’re going to dance with the devil in the pale moonlight,” you’ve got to have a plan B. Therefore, if you’re low level, say, 500 to 1000 feet, in reduced visibility at cruise speed and enter IMC conditions, you go on the dials, note your heading, note the reciprocal and then make a level, 180-degree turn toward the low ground and fly back into better conditions.

If you’ve already been operating in reduced visibility, make a climbing, 180-degree turn toward the low ground until terrain clearance is assured. If you’re in hilly or mountainous country, then you pick a heading that will keep you clear of terrain until you’re at a safe altitude and then turn towards better conditions. Synthetic vision (as I have in my aircraft) is very handy for that.

Now, the foregoing is not some theoretical, academic treatment of the subject of operating in low visibility conditions, but is the result of the experience gained from over a 40-year fixed-wing/25-year rotary-wing working career of which 15 of those years were spent working for a company with a mixed fleet of aircraft and routinely switching back and forth between types, often on a daily basis.

It is not a recommendation what a pilot should do in a given situation, but what the helicopter can do in that situation. It is concerned solely with the capabilities of each type and shows that the helicopter has a unique ability, a capability that is recognized through regulation accommodation.

And that’s why helicopters often operate in weather that alarms pilots of fixed-wing aircraft.