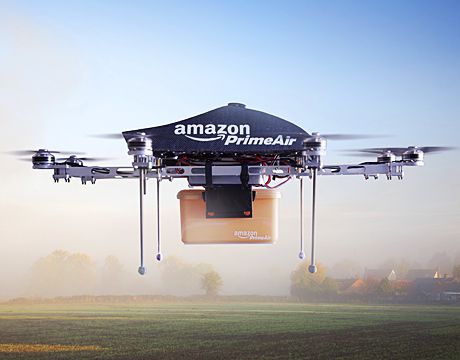 Amazon has formally applied to begin limited drone delivery of packages in the U.S. and comments are being accepted until Aug. 28. Amazon wants to use drones to deliver packages weighing less than five pounds directly to customers within 30 minutes of its distribution center. The aircraft would fly beyond visual line of sight (BVLOS), which is currently banned for all drones in U.S. airspace, and the application seeks specific relief from that ban. The packages will need to withstand a sizeable drop, however.

Amazon doesn’t envision landing the drones to release the packages. Instead, the drone will identify the correct delivery location by the existence of a “unique marker” and send the package on its way for the last few feet. Amazon’s application came a week after the FAA announced the first sanctioned BVLOS flight in Alaska by the University of Alaska Fairbanks along an oil pipeline. Amazon says more than 75 percent of its deliveries weigh less than five pounds and could be delivered by drone under this application. The FAA says it’s not predicting how long it will take to assess the application.