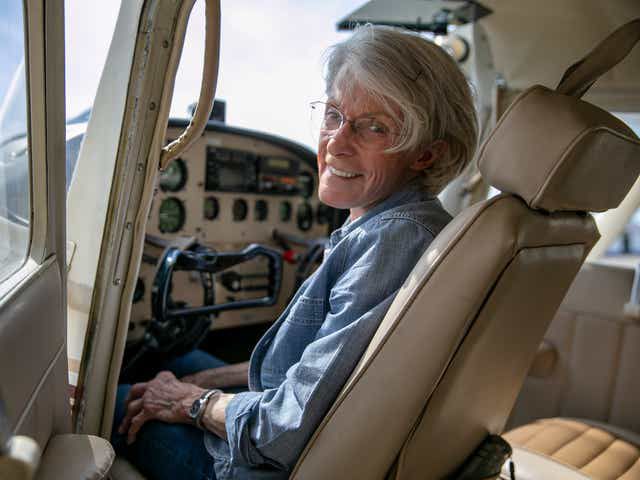 A well-known Ohio pilot and aviation columnist may be the first to run afoul of a new regulation triggered by the ADS-B mandate enacted in 2020. Martha Lunken, 78, who pens a popular column in Flying Magazine and is a fixture in Midwest aviation, flew under a bridge near her home airport, which bears her name, in southern Ohio in March of 2020, an impulsive and “immature” stunt she told AVweb she knew was wrong. But she said a coincidental malfunction of her Cessna 180’s transponder with ADS-B-Out may have resulted in her being slapped with an emergency revocation of all her certificates instead of the suspension that normally accompanies such transgressions.

Lunken said that after she’d crossed flying under a bridge from her bucket list she headed home and checked in with Cincinnati Approach and was told her transponder was off. She said she reset it and set a new code and it resumed working. In their subsequent investigation, FAA officials said that she’d shut it off on purpose to stop the system from tracking her while she threw caution to the wind. Lunken, a longtime former FAA safety inspector and veteran flight instructor, vehemently denies the charge. “I know what I did in that cockpit and I did not turn it off,” she said.

The agency used a new section of its Legal Enforcement Actions guidebook for FAA staff, which calls for revocation of a certificate for “operating an aircraft without activated transponder or ADS-B Out transmission (except as provided in 14 C.F.R. § 91.225(f)) for purposes of evading detection.” The section was added in a package of other amendments in January of 2020, just after ADS-B became mandatory in most controlled airspace and about two months before Lunken’s flight of fancy. The section is on page 9-14 at the bottom.

Lunken said she took the 180 to her avionics tech, who said the transponder seemed to be loose in its mount when he took it out. It tested fine on the bench and after it was re-installed. The FAA interviewed the tech. Lunken said the tech was unable to tell them whether the device was malfunctioning during the flight. She said now it’s her word against the FAA’s on whether the intermittent ADS-B Out signal was a malfunction or a deliberate violation. She said radar tracks that were part of the evidence against her showed the ADS-B signal from her aircraft to be intermittent. She speculates she jarred the connections loose during a few bone-jarring landings in gusty crosswinds. “I had made several rather brutal landings at OH77 (the 32’ wide, concrete, crosswind strip just north of the bridge) and it was bumpy at low levels,” she said. “I did not turn it off.”

Lunken, who has spent 60 years flying in that area, said that if she was trying to prevent Big Brother from watching her do something, there are myriad easier and virtually undetectable ways to do it. The FAA declined comment and suggested AVweb submit a Freedom of Information Act request to review the agency’s evidence supporting their findings. A spokesman said that’s agency policy on legal matters.

As for the stunt itself, which has been the focus of most of the social media attention and reaction, Lunken said it was just a silly spur-of-the-moment thing. “I looked over my left shoulder and I saw the bridge and I thought ‘I just have to fly under that bridge before I get old.’” The Jeremiah Morrow Bridge is 239 feet above the Little Miami River Gorge and Lunken said she didn’t have to draw very heavily on her 14,000 hours of experience to get to the other side. “It certainly didn’t take any skill,” she said. As for it being a reflection of her attitude toward safety and the regs, she said nothing could be further from the truth. “It is not part of a pattern of behavior and I am not an irresponsible pilot,” she said. “I would never have put anyone in danger.”

A security camera snapped a picture of her passage and the FAA sent her a letter a few weeks later saying they were investigating. She said she expected to be sanctioned, thinking she might have to sit out for a period of weeks or months. FAA enforcement guidelines call for a period of suspension of 30 days to four months for the bridge stunt, which is a violation of altitude and distance-from-objects regs. “I knew it was illegal and I did it anyway,” she said. “I’m 78 and I’m still not very mature and I hope I never am.” When she didn’t hear anything after six months, she thought the FAA had dropped the matter. The emergency revocation letter was delivered March 19.

Lunken said she’s considered appealing the revocation but her lawyers estimated the cost at $25,000. Instead, she’s spending her time watching from the ground while others fly and hitting the books to reclaim her private pilot certificate. Revocation cancels all certificates and ratings (she was an ATP) and she has to start over to get back in the air. So far, it’s been an eye-opener as she studies for the written. “A lot has changed in 60 years,” she said. Normally, a revocation prevents the guilty party from taking flight training for a year but her legal team negotiated a three-month reduction. “I’ll be a student pilot in December.”

Lunken will also be on hiatus from Flying for an unspecified period of time but will write a column in the August issue explaining the incident. She said she has kept her editors informed of all developments in her case, which Flying officials confirmed.