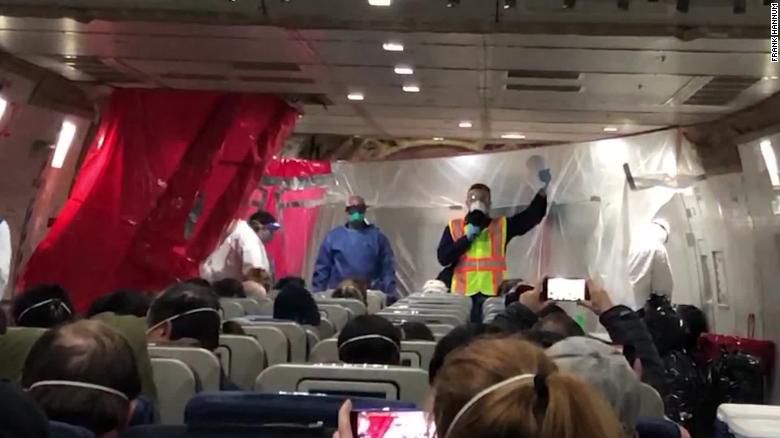 As many as eight airliners were briefly delayed at London’s Heathrow Airport on Friday to isolate and remove passengers who exhibited COVID-19 symptoms. Heathrow and local health officials refused to release details of what local media described as a “lockdown” of the airliners but United Airlines confirmed that its flight from San Francisco was involved and that a passenger had become “unwell” on the flight. According to a passenger interviewed by Metro, the sick passenger was taken to the back of the plane and the rest of the passengers were allowed off about a half hour later. United said in a statement it’s not sure what became of the passenger. “It is not clear what happened to the passenger who became unwell, nor where they had traveled from,” the statement said. There was also a report that at least one passenger on a flight from Malaysia became sick, resulting in a two-hour delay for the other passengers at Heathrow.

Meanwhile, the airlift of expatriates from Wuhan, China, the epicenter of the COVID-19 outbreak, is winding down. At least five chartered flights took Americans and some Canadians back to North America. They were taken to military bases for a two-week quarantine and the first of those groups was released in California late last week. Cargo carrier Kalitta Air did several of the flights and used a 747-400 with palletized seats to carry about 200 people on the main deck. All the passengers wore masks and crew members wore hazmat suits. The passenger area was sealed off from the rest of the aircraft with sheets of plastic.

Two more Kalitta Jumbos picked up about 400 passengers from the cruise ship Diamond Princess, which has been under quarantine in Yokohama Harbor in Japan for two weeks. Dozens of passengers have come down with the illness. Any Americans that did not test positive for the virus were allowed to board the flights. They will be required to spend two weeks in quarantine at either Travis Air Force Base near Sacramento or Lackland Air Force Base near San Antonio. Canada also sent a plane to Yokohama and those passengers will be quarantined at a former air traffic controller training facility in Cornwall, Ontario.

The virus outbreak has already had a major impact on airlines and the disrupted schedules and flight cancellations are expected to collectively cost more than the $7 billion in lost revenue recorded because of the SARS outbreak in 2003. Early estimates expect airline earnings to be off by as much as 50 percent in the first quarter of 2020. It’s also caused the cancellation of or cut into the bottom line of major events all over the planet. For instance, the Mobile World Congress, a telecommunications conference expected to draw 100,000 delegates to Barcelona later this month, was canceled and that prompted United Airlines to cancel the extra flights it had scheduled to serve U.S. delegates.