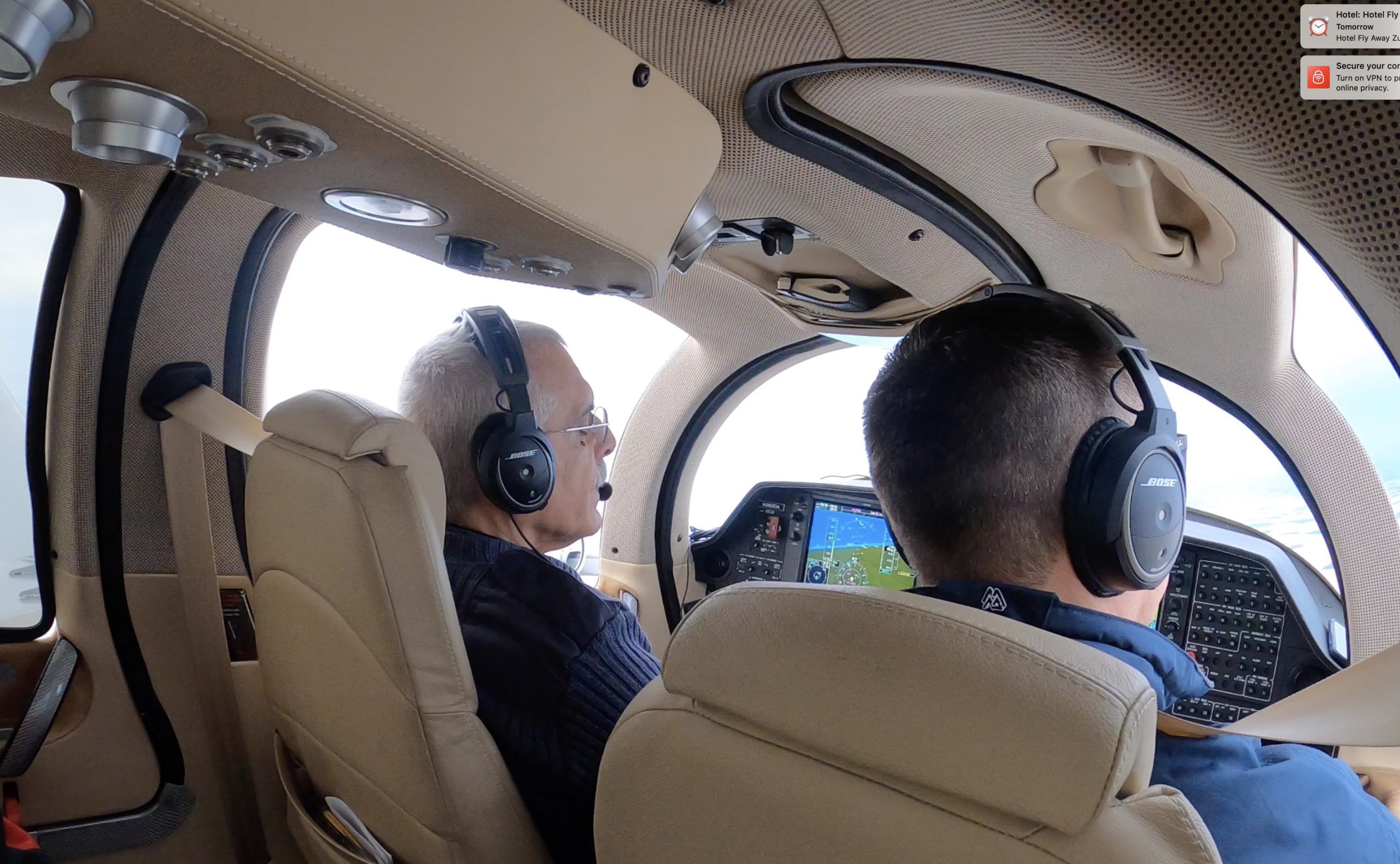 For as long as I’ve been flying instruments, my idea of a perfect day is about 200 and a mile. A little rain, maybe blowing up to 20 knots and with a hint a rime? Sure, fine. Why not? So that aspect of living in Florida is disagreeable to me because Florida is where instrument skills go to die, as mine do, eventually spurring me to action to revive them for the next cycle of doom. I mean, what’s the point of flying around with half a Clorox bottle clamped to your head unless you also go beat around in the weather?

Florida pilots, in general, don’t like any kind of weather other than CAVU. “Unflyable” weather is 2000 overcast with scattered showers. But I flatter myself into thinking my instrument skills are so solid and so wired together from 20 years of living in IMC Disneyland—Connecticut—that I can get into an airplane and essentially pick up where I left off. Every couple of years, I test the theory with a cold-case IPC at the local flight school.

Last week it was at Florida Flight Training Center, a school busy training a lot of foreign students, Indians mostly, who will pack it off back home to form the pilot cadre of growing airlines all over the world. I flew with instructor Mark Mikarts. And to be honest, as I pile on the years here, I’m curious to see if my theory is correct. Or are my cognitive and memory failings beginning to tell. Short answer: The theory is mostly correct. So far.

We did a couple of hours of ground review, but I’m pretty current on that stuff. For the flying, we took a steam-gauge 172 up to Sarasota for some approaches. It was a gusty, bumpy day below 1800 feet. As I suspected, my basic scan is as solid as it ever was. My headings and altitudes were good, if not perfect. I didn’t miss any radio calls and kept ahead of setting up the avionics. I forgot to ID the VOR for one approach.

But what happened last time I did this happened again. I was using an iPad running WingX with an external GPS. I think the GPS overheated and failed, because I lost geo-reference on the charts. No biggie. I’m comfortable with situational awareness on round gauges. The map is a nice-to-have, but I’m hardly lost without it. This time, I spent an hour working with the app before the flight so I’d be able to make it play in the heat of battle. Wasn’t enough.

Turning onto the ILS 14 at Sarasota I let the wind drift us onto the localizer, cranked in a little correction and nailed that puppy with centered needles. Look at this! It’s like the needles are broken. Well, one of them actually was broken, which I noticed when my deft pitch inputs weren’t moving the glideslope. I announced my intention to revert to LOC-only, found the MDA on the plate and motored on down to 500 feet. And that was the last thing I found on the plate.

Having just a tiny little shard of bandwidth in reserve, I was fumbling with the app to find the timing panel on the LOC-only version when Mikarts queried me on how I planned to identify the missed. Timing, of course, but where to time it from? In the quaint old days before the turn of the century, you’ll recall we had marker beacons that were vestiges of the Ernie Gann Adcock range era. They’re long gone, so no aural reminders and the phrase “marker inbound” is interred somewhere in the midden between loran and the last ADF receiver. The old habit was to punch the timer at the marker, just in case.

In place of a marker, Sarasota’s localizer has a DME fix to identify FRUGL as the final approach fix, but we didn’t have DME. Or GPS. The approach designers thought of that by making FRUGL a radar fix on someone’s video map. In days of yore, I’d have briefed that because I’d have caught it on the plate. And in days of yore, just to show off, I’d have asked the controller to call the fix for me. That’s why it’s there as a radar fix.

That was then, this is now. Somehow, I’d fat-fingered the app to shrink the plate depiction to the size of a postage stamp and I couldn’t both fly the airplane with the 1202 alarm blaring and fine tune the app to get it back. So I flew the airplane, flicking the sweat out of my eyes and recalling the glory days when I did this stuff all the time, while fetching fresh coffee from my Thermos and discussing the true implications of the Schengen Agreement and its potential impact on intra-European tourism. Mikarts gave me a pass for at least talking a good problem solve, then covered the AI and DG for a partial-panel completion of the LOC. I kept it within a third scale. Not horrible, not great. ATP performance it was not.

So, as before, where the challenge came for me was in manipulating the technology that’s supposed to make my life easier. But when a novel situation presented, it instantly spiked my workload into the unmanageable. If I’d had a paper chart, I might have dug an ice axe into the downward slide. Or maybe not. That’s not a Luddite argument for paper charts, just an observation that cockpit peripherals deliver benefits but represent another thing to be managed and tweaked amidst a lot of things that need to managed and tweaked. They need to be trained as much as everything else, but probably aren’t. As apps get more bloated with features, it gets harder, not easier. That said, I find WingX pretty easy to use, generally.

In the interest of science, technology and the advance of geriatrics, I’m planning to repeat this exercise in a G1000 Skyhawk. I’m half-assed current on that system, so I’m interested to see if the cobwebs can be blown free with an hour or so of trying. The school has a G1000 sim so I’ll be curious if a little refreshment on that before the flight helps. Hey, ya know, it’s supposed to, right?

I last did this exercise four years ago and I didn’t notice much performance degradation and since I am immune to denial, I’m sure I couldn’t possibly be deceiving myself. My last serious training was two years ago when I added a seaplane rating. It occurs to me that this training interval is too long. I’ve never thought that the 24-month flight review requirement accomplished much more than just checking the box. I think it’s too minimal to have meaningful recurrency value. I shudder to think how many flight reviews are pencil whipped.

Last week, it turned out, was a busy one for training. I did a day of it in the Velocity experimental and a half day in gyroplanes. The sum total of all this, at least for me personally, is to remind what training does. It focuses the mind to make good decisions under duress, which is really what the narrow, pointy end of aeronautical decision making is, not just remembering to retract the flaps after landing. It crossfills, too. If you train in one thing, the cognitive processes apply to another.

So now that I’m again legally current, I’ll probably put myself on a six-month cycle. Access to a sim makes it all the more easy. Meanwhile, I’m all dressed up and no place to go. Unrequited love. No IMC. If anyone wants to invite to fly a little hard weather, I’m all in.