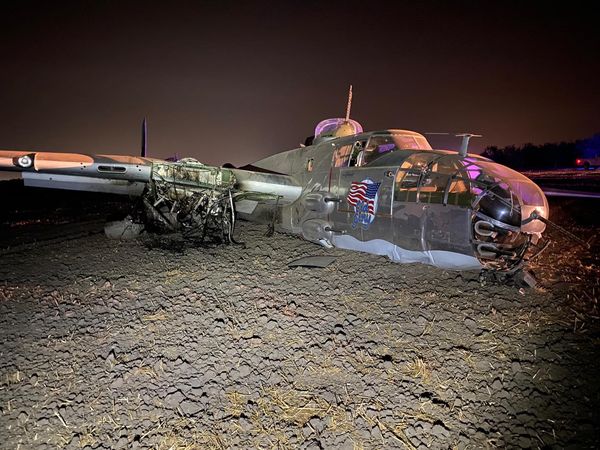 Two people were taken to a hospital and a third was able to walk away from the crash landing of a B-25 in Stockton, California, on Saturday. Local authorities said the aircraft, which is known as Old Glory, experienced some kind of mechanical failure and the pilot was attempting a forced landing when the mishap occurred. “The plane attempted a landing in an open field and appeared to have struck an irrigation ditch,” the San Joaquin County Sheriff’s Office said in a statement. “The aircraft sustained significant damage. All injuries sustained during the incident appear to be non-life-threatening.”

It was the second major accident for this airframe, which is owned by a New York corporation but based in Stockton. It was damaged in a forced landing near Reno, Nevada, in 1987 and underwent an 18,000-hour restoration that was finished in 1995. The polished aluminum aircraft has been flown regularly and displayed at various aviation events. The plane saw brief service with the Army Air Force in the Mediterranean in the Second World War and was converted to a waterbomber for firefighting in the 1960s and 1970s.