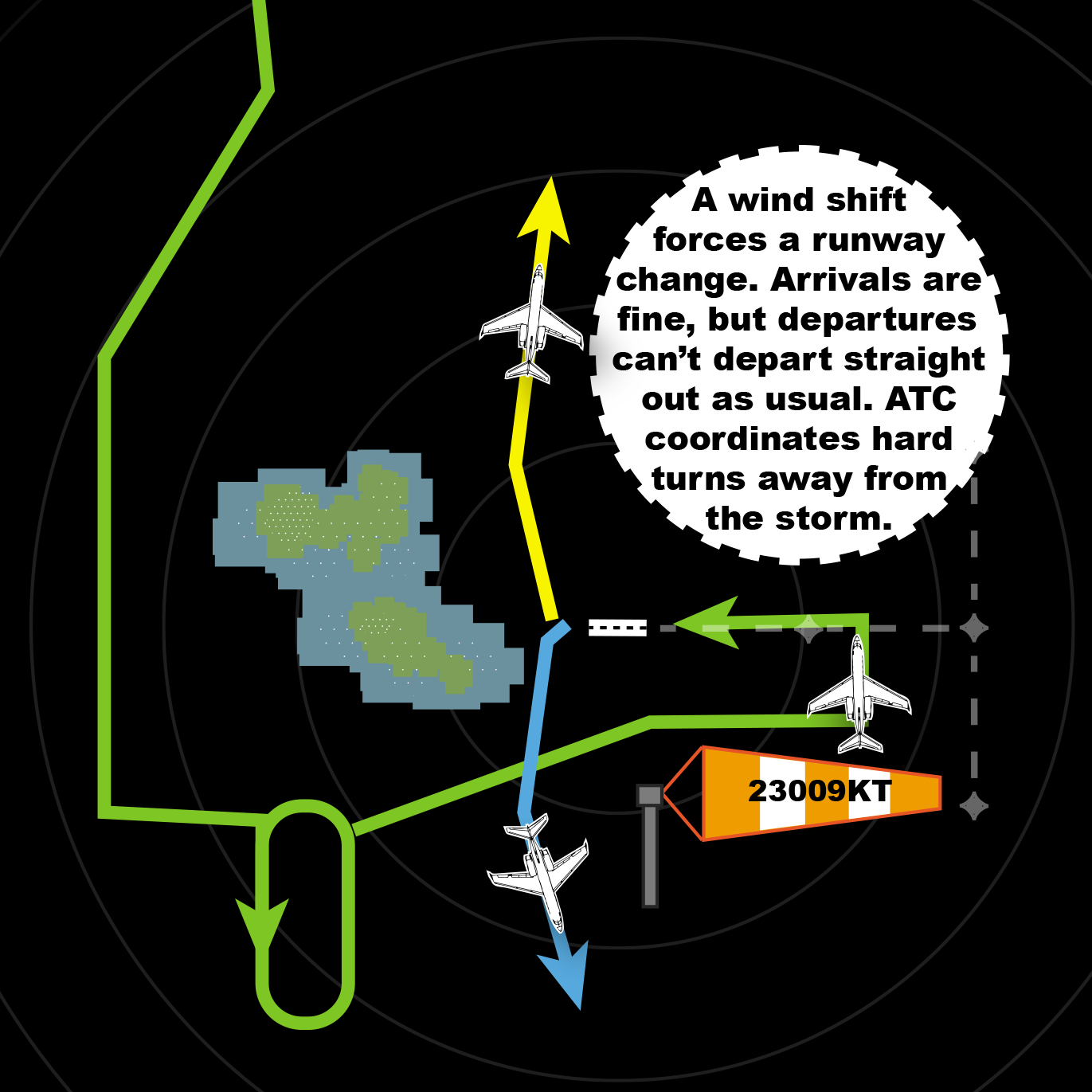 Keep Up The Good Fight

I flew 35 years for American/USAirways and 17 years with Navy Reserves. The controllers always helped me, if I explained to them what I needed. Once I was in a holding pattern with about 7 company planes ahead of me and was getting ready to divert due to fuel. I asked the controller if he could get me in. He asked each plane in front of me about their fuel and would they mind if I went ahead. He moved me to number one and 100 passengers made their connections instead of ruining their day.

That is just one story, but there are many more. It always came down to the same thing. Talk to the controller and let them know what you need.

I loved it when they were on the jump seat.

We were all on the same team.

Thank you for such a great article.

What a great article on weather and options–from both a pilot’s and controller’s viewpoint! I especially appreciated having the graphics, depicting the storm and the takeoff and landing options.

I especially liked the reference to the crew that said “We would like to line up and wait on the runway, while we check our onboard radar.” That extra 30 seconds is valuable.

I encountered this very same scenario years ago, flying a King Air out of Philadelphia. The departure weather was ominous–yet airliner after airliner accepted the clearance. When it came to my turn, I asked for a delay “position and hold” while I checked my own radar–and rejected the clearance. I fast-taxied down the runway and turned off. Still monitoring Tower, I listened as airliner after airliner did the same thing. Finally, a Middle East national airline said “We will go!…” and took into the storm. There were no other departures for 15 minutes–I got back in line, and we had “some bumps” on departure–with ATC allowing large deviations.

All it took was ONE AIRCRAFT to reject the takeoff, and others also took the same action. Don’t let “peer pressure” or pressure from ATC affect your decision when it comes to weather. As the old saying goes, “WHOSE chair is bolted to the metal–and WHOSE CHAIR IS BOLTED TO CONCRETE?” (smile).

Thanks for posting from ATC’s point of view–and how far they will go to accommodate arrivals and departures.

Long term planning (8 years out) and public relations kinda get fused together here. The “demonstrator” has yet to fly! Seems like the real need is for local flights from local airports, distances of 200 to 400 miles, with the option of connecting to hubs. Unless you live in a major city and are going to another major city, you are still out of luck. Aside from the sonic and carbon emission impacts, the price of building and maintaining these will be high, which translates into a very small market.

I really hope they can pull this off. I know the chances are not great, but before I follow Chuck Yeager west, I want to say, like him, I flew faster than Mach1. Considering I missed my chance with Concord, (too expensive for my level of income at the time) I am really trying to think positive and ignore history. Call me a glass half full guy…

Poll: Have You Seen An Unidentified Aerial Phenomenon?