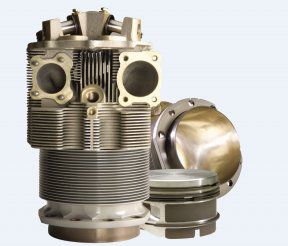 Years ago I was performing an annual inspection for a friend of mine. As was our routine, the inspection was owner-assisted. That day I was looking over the busy bits forward of the firewall, as he was doing some kind of open-up in the cabin. Suddenly, from inside the airplane, he exploded with, “What now!?”

“What did you find out there?”

“You said ‘huh’. Every time you say ‘huh’ it means you saw something that’s going to cost me money.”

How Smart Is Your Cell Phone?

If you’re routinely and regularly flying “hard” IFR using vacuum system powered steam gauges and are concerned, why would anyone use a cell phone running a dubious app as a backup? There are plenty of other potential items of portable equipment that’d do the job MUCH better and don’t take up much space in a flight bag these days. They’re no more ‘legal’ than the cell phone but do offer better performance, larger displays and were originally designed for aviation use.

The updated Dynon D3 w/ a suction cup mount would be an excellent backup worth having. The Garmin Aera 660 along with a GDL 50 would offer a full up six-pack panel like display PLUS ADS-B TIS-B traffic plus maps. I’m in love with that thing … SO much so that I’m considering buying a second and hard mounting one and using the second on the yoke. And, I never fly out of the local area unless I have a hand held radio at the ready; the new Sportys PJ2 with headset connectors is on my wish list soon. With it and the Aera 660 / GDL 50 pair, you could navigate, keep the grass under the airplane and see some traffic while you communicate in an airplane with complete electrical and vacuum system failure. If you own the airplane, installation of a new Aerovonics AV-20 would be a VERY wise backup safety investment for less than a grand. Just this week, Paul B did a superb in flight video on the Aerovonics products in his non-electrical, non-vacuum powered Cub elsewhere on Avweb. The AV-20 doesn’t cost much more than a cell phone.

Another point of consideration is a backup position source IF the primary source for a non-GPS capable iPad failed. I carry a BadElf but the Aera 660 will communicate via Wifi OR Bluetooth to do the same job. Not mentioned, a backup USB power source would be a good idea and doesn’t take up much space.

The cell phone would be the last item I’d consider for primary backup instrument use. It’s a great way to call for help after the fan stops running IF it comes to that. Unlikely that it’d survive a crash mounted in the open. I know people that now carry an inReach device full time for emergency communication, too.

I’ve been active in flying clubs and FBOs that do rentals for years. With the exception of 1 available Cirrus SR20 everything else is steam gauge. I utilize Seattle Avionics FlyQ efb which was first available for my iPad and then later for the smart phone as well. I use a portable suction mount for the iPad which has been rock solid staying in place on the windscreen and obviously travels from aircraft to aircraft as needed. All the basic attitude instruments are right there on the screen of the iPad so it indeed is an awesome backup of the primary aircraft instruments. And yes, one of the aircraft I flew recently still had a working NDB. In the old days the NDB was an asset to bring local AM broadcasting to the cockpit as well. This was before music streaming and smart anything in the cockpit.

Poll: Was Your Flying Directly Impacted by the 9/11 Attacks?

As a CFI, I was flying with a student in the local practice area when the tower called and told me all flights in the USA were ordered to land immediately, so I RTB’d and landed. My income stopped that day until flight instructing was allowed again, several weeks later.

I was on my way to Hudson’s Bay in the King Air for some goose hunting. We saw the first building on fire before departure. In northern Minnesota, ATC came back with “Well, guys–things have gone from bad to worse out East–an airplane has hit the second tower as well–this is a national emergency, all aircraft will be grounded.

By this time, we were within 60 miles of the Canadian border–I altered course to the east as the border runs southeast–in order to get into Canada first–ATC usually hands off to Winnipeg about 30 miles south of the border. Each private aircraft received the same query–“Can you land at KXXX?” Finally, it was our turn–“Would you like to go to Grand Rapids, or Duluth?” I replied “stand by”–hoping he would take the hint and just hand us off to Winnipeg. ATC eventually came back with “The Air Force has decided for you–you’re going to Duluth.” On the way to Duluth, ATC contacted Air Force flight XXX–“you’re cleared direct Duluth”–to which they responded “Negative–we’re a Looking Glass flight” (the Air Force used to keep a command and control KC-135 airborne in the event of a national emergency–one wonders why it was in northern Minnesota that day?). ATC replied–“you MUST land Duluth–we have F-16s on the ready pad for an intercept.” Looking Glass replied calmly–“We need to go back to Offutt (Omaha–military field)–we have lots of fuel, we will hold while you work that out.” Fifteen minutes later, they had their clearance.

We landed at Duluth (on the approach, ATC sent the local police to escort the ILS construction crew off the airport). ATC thought the hold would last “a few hours”–and FSS took our new flight plan to Canada. Tower advised us to “contact us at 1400 local with engines running”–when we did, they told us “Sorry–they just cancelled your clearance.” We stayed in limbo for nearly 3 days–then rented a car and drove home.